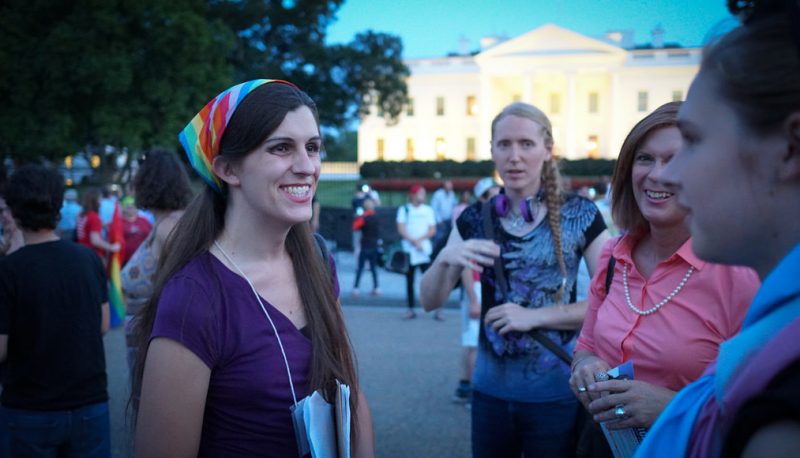 On Tuesday PFAW hosted a telebriefing with Next Up Victory Fund endorsee and Delegate-elect Danica Roem and VA Governor-elect Ralph Northam’s campaign manager Bradley Komar. The two young progressive stars discussed the resounding progressive victories of the 2017 election in Virginia and their takeaways for the 2018 midterm elections. As PFAW President Michael Keegan said, “the resistance is a force to be reckoned with at the ballot box.”

Danica Roem’s election to the Virginia House of Delegates was history-making as she will become the first openly transgender person elected and seated in a state legislature. Her victory also meant that one of the most extreme right-wing members of the House of Delegates, Bob Marshall—who sponsored an anti-trans bathroom ban and mandatory ultrasound legislation—lost his seat. On the call Roem emphasized that hard work from coalition partners, including PFAW, was key to her electoral success:

“When PFAW has volunteers knocking on doors or, you know, is donating $1,000 to us, that’s $1,000 less I have to raise somewhere else…All of this comes together—it’s a coalition that works together, and that’s what helped us get over the top.”

Bradley Komar said that a major takeaway from the election for him was that the “energy is real and backlash against what folks are seeing in Washington” makes an electoral impact. But from what he saw in the campaign, “it’s not just anger or a protest vote, it’s like civics 101 again. People want to get involved in the solution.” According to Komar, the GOP in Virginia ran their campaign straight out of Trump’s bigoted and hate-mongering playbook, and that was unacceptable for Virginia voters. Komar said that Northam’s win by 9 points in a non-presidential year was “earth-shattering”—and that it’s proof of how resoundingly Virginians rejected that message.

Political Director Lizet Ocampo also joined the telebriefing and spoke about the Spanish-language ad by PFAW’s Latinos Vote! program that ran for about three weeks in five media markets. She said, “The ad had both negative and positive messaging. We thought it was really important that Latino voters knew the anti-Latino, anti-immigrant, frankly racist ads Gillespie was running. And he was trying to win the election on these images that portrayed Latinos in a negative light.”

Roem, Komar, and Ocampo also talked about other major takeaways from 2017 that we can use to secure progressive victories in 2018 and beyond.

Listen to the full audio of the call below: