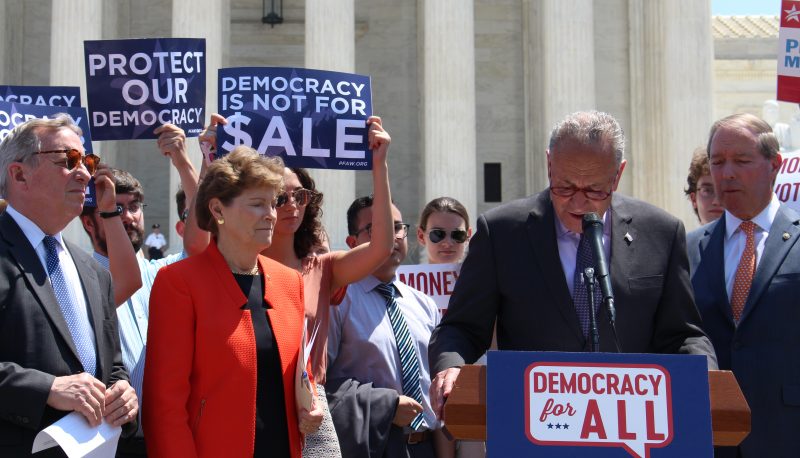 The Supreme Court’s damaging 2010 ruling in Citizens United enabled corporations and wealthy donors to spend unlimited amounts of undisclosed money to influence elections. Since then, outside election spending has skyrocketed, with nearly $1.1 billion spent on the 2018 midterm elections alone. Most of this money comes from fewer than one percent of Americans, meaning the ultra-wealthy exert outsized influence over not only who makes it into public office, but also what happens once they are in.

On July 30, Senators Tom Udall, D-N.M., and Jeanne Shaheen, D-N.H., along the other 45 members of the Democratic caucus,  reintroduced the Democracy For All Amendment, a constitutional amendment that would overturn Citizens United and related cases. They want to elevate the people’s role in our democracy and protect the integrity of American elections by once again allowing Congress and the states to limit campaign contributions and spending. “Corporations and the extremely wealthy are paralyzing our political system by flooding it with cash,” People For the American Way Executive Vice President Marge Baker said in response to the move. “We applaud Sens. Udall and Shaheen and our other allies in Congress for taking this critical action to save our democracy.”

To support the Democracy For All Amendment and call for its swift passage, People For the American Way joined a coalition of senators and allied organizations and activists outside the Supreme Court on July 30.

We’re in front of the Supreme Court to support the newly reintroduced #DemocracyForAll amendment. It’s time to #EndCitizensUnited and #GetMoneyOut of politics. pic.twitter.com/HZf2DQIBjF

Sen. Udall, the first speaker of the day, discussed the history of Citizens United and emphasized that Congress cannot rely on the Supreme Court to overturn its own decision. He thanked everyone who had been working toward the amendment’s reintroduction and encouraged his colleagues to put pressure on leadership to ensure it has a fair shot at passage.

Senate Democratic Leader Chuck Schumer, D-N.Y., talked about the irony of Trump wanting to “drain the swamp” when the real pipeline of corruption was created by the Supreme Court’s ruling, noting that money in politics has skyrocketed and pledging to pass the amendment if he becomes majority leader.

Sen. Shaheen then pointed out the ridiculous basis for the ruling, stating her view, shared by many that “corporations are not people and should not be entitled to the same rights.” She also described how big money’s influence in our elections is at the root of many of our modern political problems.

Sen. Maggie Hassan, D-N.H., also spoke and asked her colleagues to think about the future of our democracy if we continue to allow money to dictate who makes it into power.