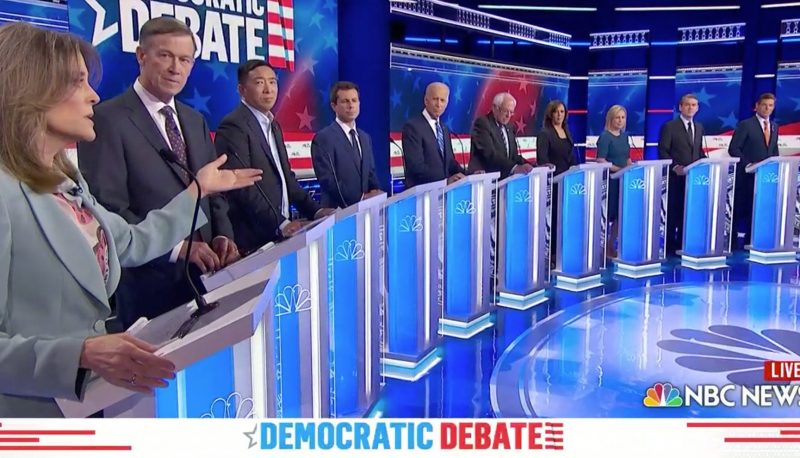 In a time when our rights, the environment, and our country is under attack, the stakes for the 2020 election have never been higher. This week, many anxious viewers watched the Democratic primary debates, hoping to find both a standout candidate and hear new ideas on the issues currently plaguing Americans.

As a consistent component of Trump’s presidency has been the abysmal treatment of immigrants and implementation of irrational policies to appease his racist base, many viewers were eager to hear ideas about how the candidates would reform our immigration system and relieve the crisis at the border. All candidates expressed deep concerns about the issue, with some like Sen. Kristen Gillibrand, D-N.Y., and former HUD Secretary Julian Castro zeroing in on the issue of asylum and pledging to protect those who are seeking sanctuary at our borders. This comes at a pivotal moment in the face of Ninth Circuit Judge Ryan Nelson ‘s apparent willingness to unfairly deny asylum claims made by people immigrating to the U.S.

.@JulianCastro: "They have been playing games with people who are coming and trying to seek asylum." #DemDebate #DemocraticDebate pic.twitter.com/IvCTdJo8pR

On the topic of immigration, several candidates also voiced their support for DACA recipients, including Sen. Cory Booker, D-N.J., who stated that he would protect those who currently hold the status and provide a pathway to citizenship. Finally, on the second night of the debate when the moderators asked if each candidate would support providing health care for undocumented immigrants, everyone raised their hand.

"I will make sure that we reinstate DACA and pathways to citizenship for DACA recipients and to make sure that people that are here on temporary protective status can stay and remain here." —@CoryBooker #DemDebate pic.twitter.com/3wli2MGBA0

Another major issue highlighted in the debates was protecting access to abortion and appointing judges who would pledge to uphold the ruling in Roe v. Wade. Amid a tidal wave of abortion ban legislation at the state level and attacks by Trump judges in the federal courts, it is imperative that the next president appoint judges who stand up for all Americans and their Constitutional rights to reproductive health, instead of narrow-minded elitists who want to use the courts to push a backward-looking political agenda.

Most candidates were quick to signal their commitment to the issue and express an understanding of the important role the federal courts play in protecting this right. For example, Sen. Bernie Sanders, D-V.T., pledged outright not to put any judges on the court who would not uphold the ruling in Roe. Governor John Hickenlooper expressed that reproductive rights should be expanded on the state level as well, and discussed a holistic approach to the issue which would include expanded access to birth control. Julián Castro said his health care plan would cover abortion going further that it would include coverage for people in the trans community.

Sen. Kirsten Gillibrand has offered one of the most detailed platforms on women's health in the 2020 Democratic field.

This was "the question Gillibrand has been waiting for all night," @PoliticoCharlie said in our live chat. https://t.co/siNWbLyATn pic.twitter.com/QqY2CPxHN0

Naturally, in a time when our health care is under attack by GOP-led legislatures and Trump-appointed judges, this issue was also prominently featured during the debates. Many candidates were quick to express a commitment to expanding access to health care and stated that they believe adequate coverage to be a human right. Some candidates, including Sen. Bernie Sanders, D-V.T., Elizabeth Warren, D- Mass., and Sen. Kamala Harris, D-Calif., pledged to support Medicare for all and many focused on large drug companies profiting from our failing system and pledged to create a more balanced approach that focuses on patient care.

.@SenWarren: "Giant corporations have exactly one loyalty, and that is to profits." #DemDebate #DemocraticDebates pic.twitter.com/39q9IJgz6p

The moderators also made a point to ask some of the candidates about their commitment to the federal courts. We need fair-minded constitutionalists on the federal bench who will respect the values of equality and justice for all and who understand the real world and how the law impacts all Americans. This issue is of the utmost importance as our federal courts have been stacked with narrow-minded elitists by Trump and Mitch McConnell.

When asked about this issue some candidates, including Sen. Bernie Sanders, D-V.T., and Kristen Gillibrand, D-N.Y., made statements about vetting nominees based on their positions on certain issues like reproductive rights and immigration. Mayor Pete Buttigieg made the issue more personal, stating that he understands firsthand the importance of federal courts as his marriage is only legal because of the “grace of a single vote on the Supreme Court.”

Every single candidate in the democratic primary should prioritize picking fair-minded constitutionalists for the federal bench who respect equality and justice for all. https://t.co/qhVGvBLhjR #VoteTheCourts2020 #DemDebate2 https://t.co/ERIpX6ghPk

Primary season has official kicked off and the first round Democratic presidential debates covered many critical issues. PFAW will continue watching for candidates who are making nominating judges who believe everyone should have an equal voice in our democracy a priority on the campaign trail.