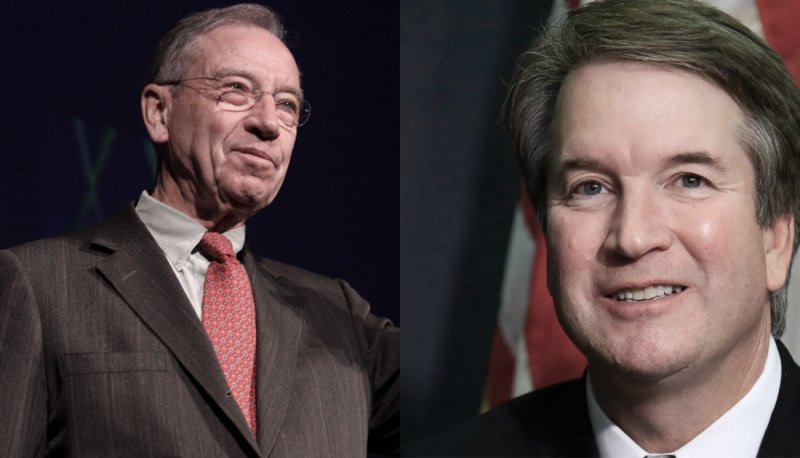 The GOP’s effort to sell the Brett Kavanaugh hearings as legitimate crumbled even further as soon as Day Three began.

Chairman Grassley insisted the “committee confidential” process was fair and gave all senators plenty of time to make certain documents public. He read from a memo he claims to have sent to all members on August 22, setting a deadline for August 28 for them to submit requests for specific documents to be re-designated as publicly available.

So when thousands of records were dumped hours before the hearing began, senators were supposed to have asked Grassley for permission to re-designate specific documents by nearly a week earlier?

Democratic senators pointed out that the secret documents have nothing personal, nothing implicating national security, nothing at all sensitive—except that they reveal unflattering aspects of Kavanaugh’s record that would make it all the more clear that he should not be confirmed.

Sens. Booker and Hirono specifically stated that they were releasing specific relevant “committee confidential” documents regardless of the illegitimate designation. Booker, announcing the release of documents on Kavanaugh and racial profiling, accurately called this civil disobedience.

Sen. @CoryBooker says he is releasing one of Kavanaugh's “committee confidential” emails, titled "Racial profiling," as an act of civil disobedience! Here is an example of the documents they are talking about: https://t.co/ZSLaPej8pe #StopKavanaugh #WhatAreTheyHiding

Other Democrats agreed, making clear they do not accept the legitimacy of this hearing and of the “committee confidential” process. Ranking member Dianne Feinstein states that 190,000 documents have been so designated.

“All of these documents belong to the people of the Unites States.. and they will come out eventually, so shame on my colleagues if they conceal them now.” –@SenBlumenthal #StopKavanaugh #WhatAreTheyHiding pic.twitter.com/WbWNzb8sKR

It has been clear from the start that this is a partisan process, designed to hide rather than reveal the nominee’s record.

No Supreme Court confirmation process has been infected with corruption at this scale in modern times, perhaps ever.  It threatens democracy, and that is its purpose.

Let’s hear it for civil disobedience.