The anti-gay National Organization for Marriage is being widely condemned as Americans learn from previously secret organizational documents the lengths it is willing to go in order to turn one community of Americans against another. This week, campaign literature from one of NOM’s allies in the fight against equality, Maryland state senator Anthony Muse, is raising questions as to whether he is using similar methods himself.

Muse, an African American minister in the Washington suburbs, is challenging Sen. Ben Cardin in a Democratic primary election next week. Cardin is Jewish. Maryland Juice has posted a copy of a Muse sample ballot reportedly being distributed at some early voting centers that seems to indirectly make Cardin’s religion an issue. The second page notes the underrepresentation of African Americans and other people of color, but also seems to go out of its way to imply there are too many Jews in the Senate. 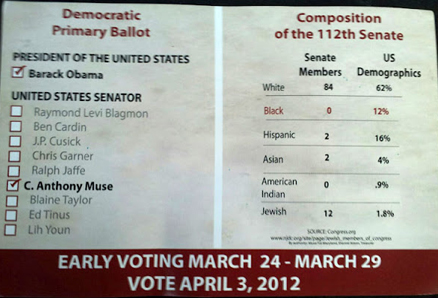 What legitimate reason is there to include a count of Jews in this tally, when there is no count of any other religious group? Noting that Jews are 12% of the Senate but only 1.8% of the population seems designed to stoke unwarranted and dangerous resentment among voters who are justifiably frustrated that there are no African Americans in the U.S. Senate today.

PFAWF Supports Young People, Communities of Color in Getting Out the Vote This Election Day