Falsehoods and Failures: Trump at the RNC During COVID-19 (9/01 Update)
Skip to main content

Falsehoods and Failures: Trump at the RNC During COVID-19 (9/01 Update) 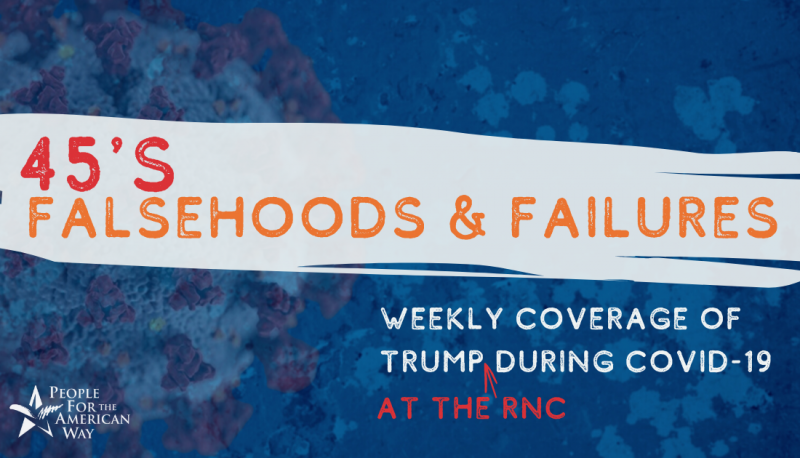 Falsehoods and Failures: Republicans at the Convention During COVID-19 (8/27 Update)

Despite Donald Trump’s many coronavirus-related failures last week, it was his self-congratulatory, lie-infused performance at the Republican National Convention (RNC) that clearly rose above all the rest.

Much of the time that Trump was center stage during the RNC, he spent it warning of a dark world filled with death and destruction should Joe Biden win the general election in November. But the apocalyptic world that he described is nearly identical to the one Trump’s failed leadership has created.

There was a lot of fearmongering at the RNC, but the event concluded without a single mention of how many Americans have died due to COVID-19. This calculated omission is a disturbing glimpse into the Trump campaign’s election strategy, one that we won’t allow to continue unchecked. After the Republicans’ weeklong festival of lies and misdirection, it’s more important than ever that we continue to push back against lies from Trump and his cronies – and to hold them all accountable for playing political games with our lives.