Falsehoods and Failures: Republicans at the Convention During COVID-19 (8/27 Update)
Skip to main content

Falsehoods and Failures: Republicans at the Convention During COVID-19 (8/27 Update) 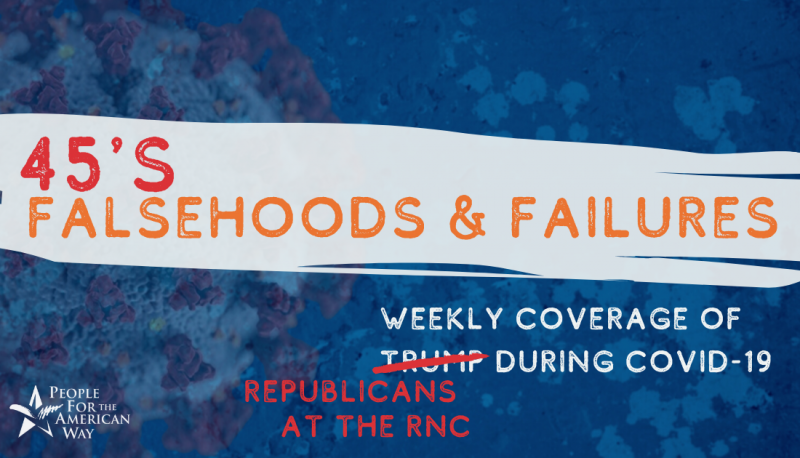 The Republican National Convention (RNC), which is being held this week from August 24 through August 27, has so far been a smorgasbord of outright lies, propaganda, and dangerous behavior from Donald Trump and his fellow Republicans. Due to the scope of appalling developments coming out of the RNC, PFAW is bringing you two editions of “Falsehoods and Failures” this week – one that’s all about Trump’s cronies and one that focuses on Trump himself.

In any given week, Trump can often rely on his Republican allies to lift up his lies and dangerous actions, but at the 2020 RNC, such cronyism is at a reality-bending high. Attempting to provoke more pro-Trump fervor among their base, most speakers leaned into a theme of fear – not of COVID-19, but of the Democratic Party and its presidential nominee.

From race-baiting to misstating the Democrats’ policies, Republicans at the Convention showed little interest in acknowledging Trump’s responsibility for the continued devastation sparked by the ongoing pandemic.

It’s clear that the entire convention was geared to one audience member: Trump himself. As the final night of the RNC gets underway, Republicans are uniting with the goal of doing and saying whatever will make Trump happiest. And pretending – irrespective of fact or evidence – that thousands of Americans are not dying every day due to a public health crisis that his failures compounded is certainly what Trump wants the most. But we’re not going to let the Republicans’ lies rest unchallenged, whether they come from the White House, Congress, or anywhere else.