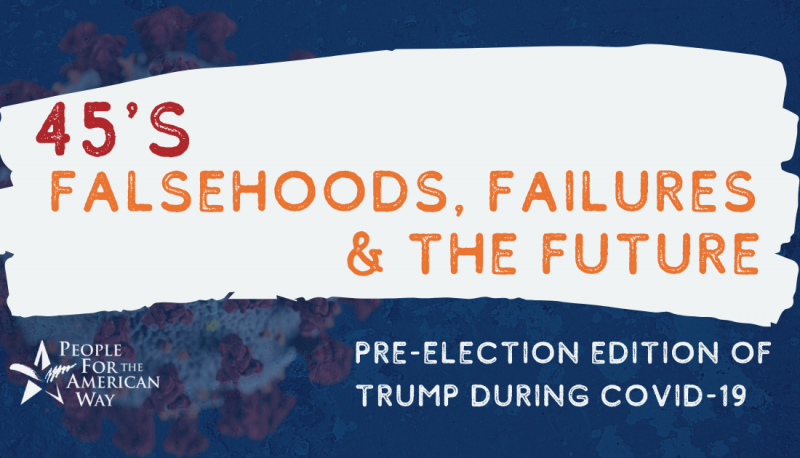 As of October 30, the U.S. has counted more than nine million people who have been infected with COVID-19, the disease caused by the coronavirus. At least 228,700 Americans have died since January 2020, although experts agree that the actual toll is likely much higher.

Since it began, Trump has refused to properly respond to the pandemic. Instead, he has chosen to politicize it and prioritize his own interests over saving lives and protecting the American people. Our nation’s greatest scientific minds agree that the pandemic “didn’t have to be this bad.” The duration, severity, and impact of this crisis is largely a problem with our leadership – and as a leader, Donald Trump has failed.

In the seven months that we have tracked Trump’s pandemic falsehoods and failures, he has repeated his lies and disinformation, attacks on science, and reckless behavior week after week, creating a disturbing sense of déjà vu. With Election Day nearly upon us, we are looking back at some of those and the impact his negligence has had on the American people – and what the next four years could look like with Trump in office.

There is no single theme of Trump’s response that has more points of proof than this one. Two weeks before Election Day, Trump averaged more than 50 false claims every day. It seems as though the more desperate he is to cling to power, the more he lies. Trump’s falsehoods have had a dangerous effect on Americans’ trust of scientific expertise and the media.

The week before the election, Trump repeated his old lie that COVID-19’s severity is a “Fake News Media Conspiracy,” and claimed that the virus isn’t to be feared; his White House also boasted that he had ended the pandemic. All of the above happened on days when the U.S. saw record-breaking new levels of confirmed cases. Trump’s response to the dramatic spike in case levels continues to be to blame testing, but even the White House’s coronavirus testing czar, Admiral Brett Giroir, has joined other medical experts to pointedly refute that claim, since the number of new cases is now increasing at a significantly faster rate than the number of tests performed.

In addition, Trump and his inner circle have continued to actively hide information from the American public, ranging from initial reports about the disease to dissembling about the White House’s multiple coronavirus outbreaks. Trump’s false reality has only expanded as the pandemic has worn on, and would surely continue into a second term if he is reelected.

In addition to repeatedly lying about the pandemic, Trump has repeatedly disassembled scientific offices and ignored basic COVID safety recommendations. Despite additional from the Centers for Disease Control and Prevention that masks can provide a 75 percent drop in cases when worn by a significant majority of the population, Trump has repeatedly mocked others for wearing them and continued to hold maskless in-person campaign rallies. In fact, almost 130,000 deaths could be prevented if a universal mask mandate was in place now and continued through January 2021. But if Trump’s own bout of COVID-19 hasn’t convinced him to change his attitude toward masks, it’s likely that nothing will.

Consistently suppressing and fighting with members of the scientific community has been a hallmark of Trump’s response to the pandemic, as has been his tireless push to prematurely reopen various institutions for in-person use, against experts’ recommendations. He demanded that state leaders lift lockdowns to reopen businesses and the economy, then insisted on reopening schools for in-person classes. In both cases, his pushes directly jeopardized Americans’ health and resulted in new or worsened outbreaks. This is likely to continue if he remains in office.

Politicization of the Pandemic

From its onset, Trump has tried to position the pandemic as a political issue rather than the public health crisis that it is. His administration has slowly broken down the federal agencies that have acted as our bulwark against infectious catastrophe for many decades, and signed an executive order that would allow him to fire thousands of civil servants for “disloyalty” to him or his government. Political appointees to federal institutions, including the U.S. Department of Health and Human Services, have launched deeply politicized campaigns and have pushed that only serve to misinform the public. Trump has also falsely promised a vaccine before Election Day, most notably at his campaign rallies, despite the Federal Drug Administration’s attempts to preserve the vaccine process’s scientific integrity.

This politicization of government agencies whose nonpartisan nature is essential would very likely continue into Trump’s second term were he to win reelection. We simply cannot afford any more political gambles when our health and our lives are at stake.

Fixation on the Economy

If there is one area in which Trump has demonstrated any regard, it is his distorted take on the economy. Millions of Americans continue to suffer from persistent, record-breaking levels of unemployment and poverty, yet Trump has consistently fixated on the stock market. Earlier this month, he admitted that his “pride” kept him from negotiating a coronavirus relief package, since he believed doing so would seem to benefit Democrats during an election year.

Millions of Americans continue to struggle while Trump lies that jobs are “returning” and the economy is “great.” If Trump were to win a second term as president, his priorities would likely continue to benefit the wealthy at our expense.

Sadly, those trends do not encapsulate the full scope of Trump’s failed response to the coronavirus. Amid the pandemic, he has also spread disinformation about voting by mail, and has rammed through a Supreme Court justice to help him gut affordable, accessible health care.

Trump’s Republican enablers in Congress have also politicized the pandemic in lockstep with the president, and have exacerbated the harm their constituents are facing. That’s why it’s just as important to defeat Republicans in the Senate in addition to removing Trump from office.

After months of tracking and analysis, it’s clear that Trump has weaponized the pandemic at the expense of all of us. From the beginning, Trump has treated the lives of Americans as if they were simply pawns in his political game, tools to use as part of his ploy to gain more and more power, shaping the federal government into the kind of authoritarian regime to which he seems to have always aspired.

We cannot let the Republicans destroy our democracy.

Our country needs someone to lead us through the next stages of the pandemic with a comprehensive, evidence-based plan. That’s why the best thing we can do now to protect ourselves and our communities from COVID-19 is to vote Trump out of office for good on November 3.