Fighting for Justice at Justice Means Opposing the Dreiband Nomination 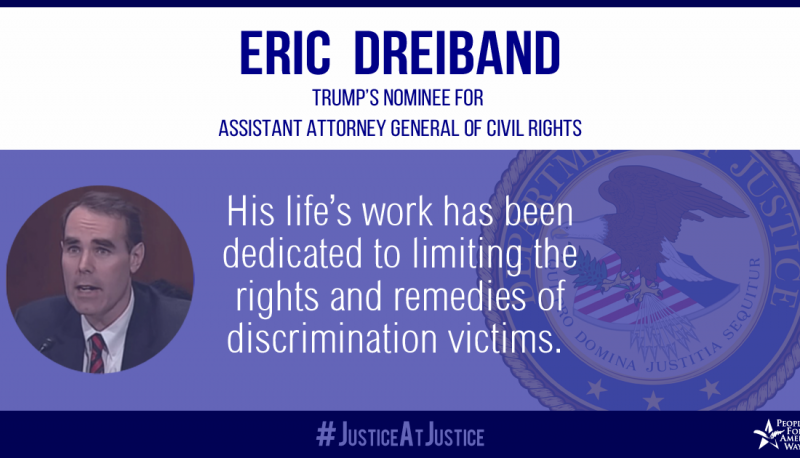 This December will mark the 60th anniversary of the Civil Rights Division at the U.S. Department of Justice. This division is supposed to ensure that civil rights protections are enforced, especially for those who are too often the target of civil rights violations, like Black Americans and other people of color. Yet we have recently seen DOJ, under the leadership of Attorney General Jeff Sessions, walk away from this critical work. And now President Trump wants to put Eric Dreiband, who has spent much of his career defending corporations accused of employment discrimination, in charge of the Civil Rights Division.

People For the American Way is among the more than 60 organizations that wrote to the Senate on July 31 to oppose the Dreiband nomination. As stated in our letter:

[W]hile a lawyer is not responsible for the conduct of his or her clients, Mr. Dreiband has been devoted to limiting the rights and remedies of discrimination victims not only in the courtroom, but also in the congressional hearing room and through his personal writings. He has testified in his personal capacity – not on behalf of clients – against important legislation to safeguard our civil rights, and he has opposed important civil rights priorities. We are particularly troubled by his personal opposition to bipartisan efforts to combat employment discrimination against women, older workers, and individuals with arrest or conviction histories.

PFAW joined many of these same groups, led by the Leadership Conference on Civil and Human Rights, on a letter sent back in February that outlined what we expect from the Civil Rights Division:

We believe the Assistant Attorney General for Civil Rights must have:

Nothing in Dreiband’s record suggests that he will live up to these expectations. Take just two of the most pressing civil rights issues that the U.S. faces today:

Discrimination Against American Muslims: When the EEOC sued Abercrombie & Fitch for declining to offer a religious accommodation to an applicant who wore a hijab, which did not comply with Abercrombie’s dress and grooming policy, Mr. Dreiband represented the company. He argued on behalf of Abercrombie that because the applicant did not request a religious accommodation or mention religion during her interview, the company did not have actual knowledge of the religious nature of the headscarf or the applicant’s need for an accommodation. The case ultimately went to the Supreme Court, which ruled 8-1 against Mr. Dreiband’s client in 2015. Only Justice Thomas agreed with his extreme position.

In a 2010 case, Ghori-Ahmad v. U.S. Commission on International Religious Freedom, Mr. Dreiband represented the U.S. Commission on International Religious Freedom when they were sued by a Muslim woman for rescinding a job offer it had extended to her, failing to renew her temporary contract, and retaliating against her for filing an EEOC complaint. The case ultimately settled.

Transgender Discrimination: As part of the legal team representing the University of North Carolina (UNC), Mr. Dreiband worked to thwart the Civil Rights Division’s efforts to block a North Carolina law (HB2) restricting transgender people’s ability to access public restrooms (United States v. North Carolina). Prior to Mr. Dreiband joining its legal team, UNC made public statements denouncing HB2, but, when in court, stated that it could not disavow its obligation to follow state law. Ultimately, the district court entered a limited preliminary injunction enjoining UNC from enforcing the law only against the named plaintiffs during the pendency of the litigation. After the entry of the injunction against UNC, Mr. Dreiband, a law firm partner with significant discretion to choose his cases, volunteered to join the team opposing the Civil Rights Division’s case as the matter moved to a full disposition on the merits. The Sessions Justice Department dismissed its suit earlier this year after HB2 was modified, but civil rights groups have continued to press claims against UNC and other state defendants (Carcano v. Cooper). As of the date of this letter, Mr. Dreiband has not withdrawn as counsel, and thus remains a member of UNC’s legal defense team.

PFAW strongly believes that Dreiband is not the warrior for justice that the Civil Rights Division so desperately needs. Instead, he is merely the latest in a long line of Trump nominees set to lead offices whose missions they have challenged and opposed.