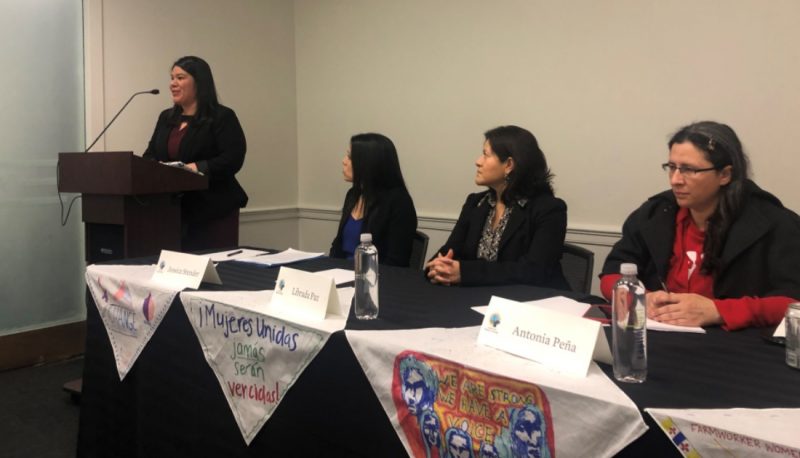 PFAW Joins Coalition of Activists for Immigration Demonstration in the Senate

In honor of National Farmworker Awareness Week, on March 27 the group Justice for Migrant Women hosted a briefing on Capitol Hill to expose some of the issues farmworker women and other low-wage workers face in their jobs. The rampant amount of sexual violence farmworker women experience has been known to be severe for quite some time, but in recent years, various support groups and activists have started mobilizing to raise awareness and encourage others to show their support. One of these campaigns is the Bandana Project, which uses the bandana as a symbol of the issue because many workers use bandanas to protect their bodies from the sun and other dangerous elements while they are at their jobs. Many farmworker women also wear bandanas to cover their faces and bodies to deter sexual harassment at work. For this campaign, allies are also decorating their bandanas in solidarity and to bring attention to the issue and educate other members of the workforce.

Farmworker women experience workplace sexual violence at alarming rates. We can work together to so that all workplaces will be safe. Get involved w/ The #BandanaProject & become a partner. Find out more at https://t.co/KKKmBBxlvz. #MeToo #NFAW19 @mujerxsrising pic.twitter.com/dPE7OuCjm0

A farmworker named Maria, a farmworker woman who is a member of the United Farm Workers and a survivor of workplace sexual harassment, told a harrowing story of what it was like to be sexually assaulted at her job. She had experienced harassment for months and tried to report it to her supervisor, but her attempts to mitigate the issue with a reassignment or reprimand of her harasser were wholly ignored. After she was attacked, she received very little support at work and felt too ashamed to officially report the incident to any outside forces. In a passionate speech, she called on Congress to implement policies that create more secure avenues for reporting such incidences.

Maria: “Not a single cup of milk or coffee should be produced by the abuse of human beings… Sexual harassment is present everyday in the dairy industry.” #nfaw19 #bandanaproject pic.twitter.com/zUqLs40yFH

The next speaker was Rep. Joe Kennedy, D-Mass., was there as an honorary co-host of the event and longtime advocate for better policies surrounding sexual harassment in the workplace, especially for migrant women. Rep. Kennedy discussed how this is a major problem in his district and home state generally because of the strong presence of farmworkers and migrants. He hopes to create new avenues that will allow workers to report these incidences without fear of repercussions from their employers. He also stressed the importance of keeping this issue separate from immigration enforcement so that undocumented women, who are statistically targeted at higher rates, can also receive justice.

The panel then opened up for a larger conversation about the extent of this issue and ways that it can be addressed. Jessica Stender of Equal Rights Advocates, a movement leader and longtime advocate of survivors who served as the moderator, discussed how “sexual harassment doesn’t exist in a vacuum.” Many women who experience this trauma are also experiencing other inequities in the workplace, including pay discrimination and other forms of physical abuse. Each issue is connected and cannot be addressed independently.

Librada Paz, a farmworker leader and RFK Human Rights Award recipient, was also on the panel. Her responses were especially heartbreaking as she has personally experienced sexual violence as a farmworker and was very vocal about the damage it did to her as a young woman. She discussed how working conditions are designed to create an unfair power dynamic in workplaces that are already systemically oppressive to women, making reporting these incidences nearly impossible without fear of repercussions. She called for better education on these issues, both with people working in the industry and with those in Congress who have the power to implement legislative protections.

Librada Paz: “Workers are so afraid of speaking out… We want to really educate people on the ground so politicians work to address these abuses.” #bandanaproject pic.twitter.com/7QxCju8zv0

Antonia Pena, another survivor and advocate, also discussed her personal experiences with the system and how many women do not actually know what harassment and assault look like. She suggested mandatory trainings for both men and women in the workplace, which would hopefully lead to better work environments and a general culture shift of attitudes towards sexual assault. She also advocated for better legal protections for domestic workers, who are often employed by individuals or small businesses and do not receive the same legal rights as those working for larger employers.

Finally, the last speaker, Hector Sanchez from the Labor Council for Latin American Advancement, stated that it was an “embarrassment” that we have not acted on this as a nation and stressed the urgency to implement better policy changes immediately. LCLAA has recently studied the extent of these abuses and he stated that the numbers are simply appalling and unacceptable. He called for grassroots organizing, lobbying, and education, and finally stated that the burden of change should not fall on the survivors.

Hector Sanchez: “A system that allows for the exploitation of our sisters is unacceptable.” #nfaw19 #bandanaproject pic.twitter.com/3gUdyrne9n