First Boehner Billboard Up, Second On the Way - People For the American Way
Skip to main content

First Boehner Billboard Up, Second On the Way

Last month, PFAW Voters Alliance joined up with the AFL-CIO and Blue America PAC to host a contest to choose a billboard to grace a busy highway near House Minority Leader John Boehner’s home district. The winning concept is now a reality, by the side of a Cincinnati-area stretch of I-75: 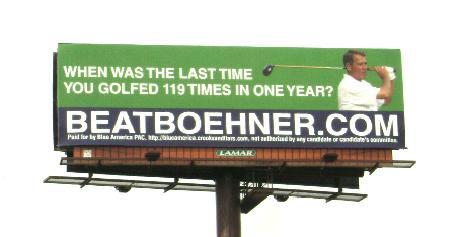 The contest was such a success that we’ll be putting up a second billboard with the runner-up slogan:

Take a look at this segment on the first billboard from Cincinnati’s WLWT:

It’s not too late to contribute to the effort to confront Boehner on his home turf. You can find the billboard options here.

But first, let’s take a minute to remember why we’re putting up these billboards in the first place—and why it’s so important that Boehner doesn’t end up with more power in Congress than he already has. Just in the past two months, Boehner has:

And that’s just what he could come up with during two summer months, in between rounds of golf.