Florida Nominee to Test How Far GOP Will Take Obstruction

As Paul wrote earlier today, Senate Majority Leader Harry Reid has schedule a vote on Monday to break the GOP filibuster of Adalberto Jordán, a Florida judge nominated to fill a judicial emergency on the 11th Circuit Court of Appeals. If confirmed, Jordan would be the first Cuban American judge on the 11th Circuit, which oversees Florida, the home of the United States’ largest Cuban American population.

What’s most notable about this vote is that it’s happening at all.

Traditionally, nominees like Jordán – who has the support of both his home-state senators, a Republican and a Democrat, and who was approved unanimously by the Judiciary Committee – would be swiftly confirmed, not be filibustered by the minority party.

But the Senate GOP hasn’t been so fond of Senate tradition, or efficient management, when it comes to confirming President Obama’s nominees. Instead, the GOP is filibustering Jordán and sixteen other nominees, the vast majority of whom have broad bipartisan support.

Below is an updated chart comparing how long each nominee on the Senate calendar has been waiting for an up-or-down vote, compared to the average wait time for Bush’s nominees at this point in his presidency.

The difference is striking: 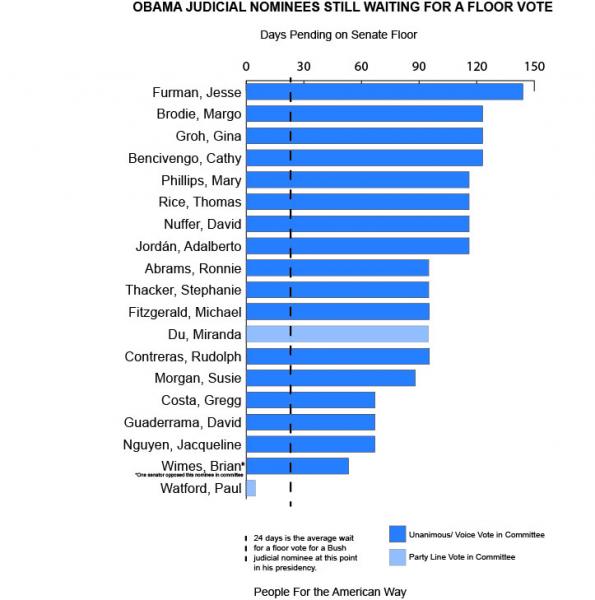 The Senate GOP has been doing everything it can to gum up the works of the Senate – even when it means causing a four month delay for a widely-admired, bipartisan, historic nominee for a seat that has been designated a “judicial emergency.”

The pressure is now on Sen. Marco Rubio, a new favorite in the GOP, to convince his fellow Republican senators to put aside politics and confirm Jordán.