Fox News: A Mirror Image of the Truth (Or, Reason #965,822 why Americans should not trust Fox News) - People For the American Way
Skip to main content

Fox News: A Mirror Image of the Truth (Or, Reason #965,822 why Americans should not trust Fox News)

Fox News’ graphics department consistently and persistently makes “mistakes” that show incorrect poll numbers, mislabel people’s party affiliation, and do other things to cast Fox’s favored side of a debate in a positive light and to smear its opposition.

A USA Today/Gallup poll shows a strong majority of Americans — 61% — saying that collective bargaining rights should NOT be taken away from workers. Today’s Fox & Friends morning show reported the exact opposite of those polling results, asserting instead — falsely — that according to the very same poll, 61% percent of Americans support union-busting.

It was not just the graphic (below) that peddled this lie. The show’s co-host Brian Kilmeade enthusiastically reiterated it.

Later in the broadcast, a correction was made and the actual results of the poll were noted. However, Fox “fessing up” to these mistakes doesn’t change the fact that their continuous snafus appear to be, at best, egregiously sloppy “journalism” and, at worst, intentional distortions meant to confuse, if not mislead, their audience. 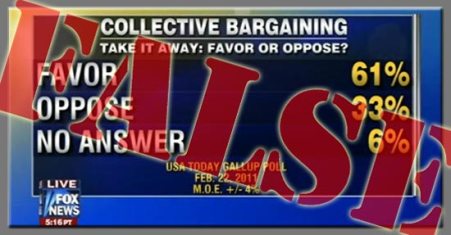 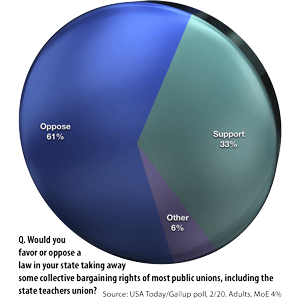 This is just further proof that lies are the currency of the realm at Fox News.