From Wisconsin: Palin Echoes the Right's Lies in Madison Speech - People For the American Way
Skip to main content

From Wisconsin: Palin Echoes the Right’s Lies in Madison Speech

On Saturday in Madison, some of the right wing’s favorite puppets rallied along with an estimated 1,000 Americans for Prosperity “Patriots” and 5,500 counter protesters at the Capitol.

As the former Governor of Alaska took the stage to chants and drums and counter protesters respectfully turning their backs, sleet turned to snow, the wind from Lake Mendota whipped through the crowd and the protesters’ chants and drums grew so loud that it was impossible to hear the loudspeakers.

Palin called for the crowd to support Governor Walker’s strong armed maneuvering, saying “…you saw these violent rent-a-mobs trash your capitol and vandalize businesses. You held your ground. Your governor did the same thing. And you won.” It isn’t clear what violent mobs or vandalized businesses she was referring to. Fox News and fringe right-wing websites have tried to make similar claims about the protesters in Wisconsin, even resorting to using misleading video footage from unrelated protests in other states. But as anyone without a dishonest, far-right agenda who has been following the events of the last 62+ days can tell you, the protests — and the protesters — have been peaceful.

While Palin spent the majority of her speech blasting President Obama for energy saving and job creating programs such as consumer solar panels and high speed rail, Andrew Breitbart cut right to the point at hand, leading a chant of “go to hell” aimed at the thousands of counter protesters.

Despite the miserable weather, PFAW members and a whole host of progressive and labor allies were out in force in support of collective bargaining rights for Wisconsin’s public workers, not only at the Tea Party’s rally but on the other side of the Capitol, where thousands gathered for songs, slam poetry and speeches by those leading the fight.

After 62+ days of protests in Madison transitioning into weeks of recall efforts across the state, it’s clear this is truly what democracy looks like.

Wisconsin PFAW Supporters were out to greet Ms. Palin on Saturday: 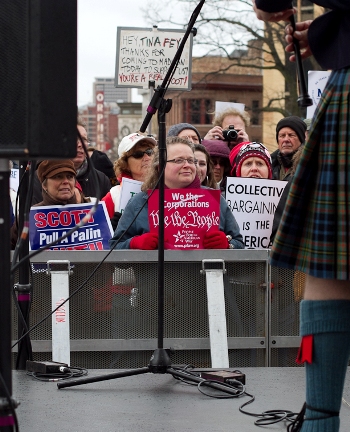 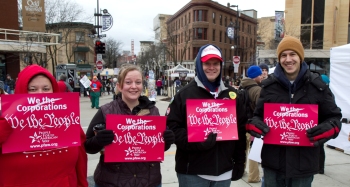 The Senate Must Support the January 6 Insurrection Commission