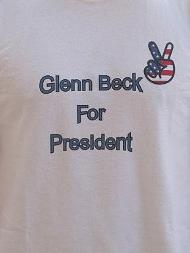 Photograph taken this morning by PFAW Foundation at the Kennedy Center. This is a tee shirt worn by a crowd member who showed up for tickets to the “Divine Destiny” event.

Beck’s “Restoring Honor” event tomorrow will be preceded by a warm-up event at the Kennedy Center tonight called Divine Destiny. At tonight’s event, Beck and others will present some good old fashioned revisionist history on “the role faith played in the founding of America.” Tickets were to be distributed at 10am this morning, but so many people were already in line by 8:30pm on Thursday that tickets were gone far ahead of schedule — talk about a “hot ticket!”

We need to seriously examine how Glenn Beck is perceived by the Right. According to a recent Democracy Corps study, among the Tea Party crowd, Beck is one of the most revered and highly regarded figures. According to the same study, Beck is more than a trusted commentator: he’s an “educator.” That’s a chilling reminder that the hate-drenched right-wing propaganda Beck passes off as “history” is being swallowed whole by his millions of viewers and radio listeners. In Beck, the Right has added an atomic bomb to its arsenal in its war on science, history and reason. Beck insists that “progressives” — whom he calls a “cancer” on our country — “control the textbooks.” He’s an avid climate change denier. And with his attempt to “reclaim the civil rights movement” this weekend by holding a rally in the same spot as and on the anniversary of Dr. King’s “I Have a Dream” speech, he is twisting our nation’s history to serve a scary agenda.

Just the other night Glenn Beck aggressively attacked President Obama’s Christianity — fanning the flames of bigotry at a time when a whopping 18% of Americans think the president is a Muslim and some on the Right are trying to start a new “Birther-style” movement demanding proof of Obama’s baptism. Is this the spirit of Dr. King’s movement Beck is talking about reclaiming?

One would think that as someone whose own faith has come under attack, Beck would be more careful about attacking others’ religion. But in the messianic light in which he sees himself, he can do no wrong and commit no hypocrisy.

Stay tuned. People For will be covering Beck’s self-aggrandizing events in Washington, DC this weekend as well as Sunday’s “early 9/12” Tea Party event.