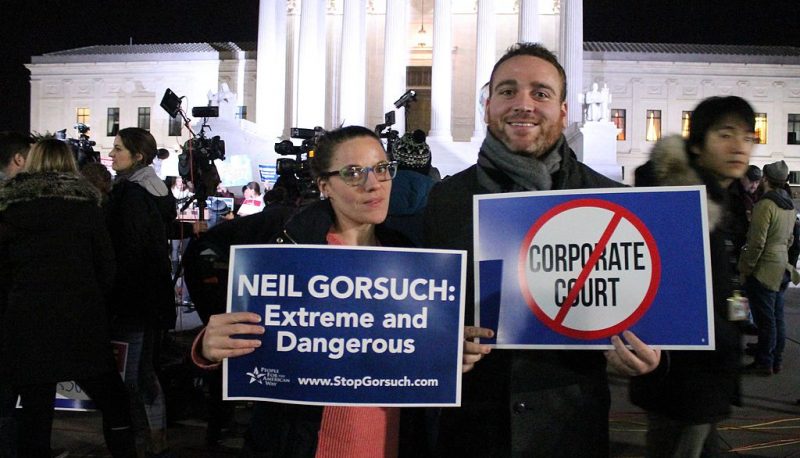 Regardless of how reluctant Gorsuch is to talk about his connection to right-wing, conservative groups, Gorsuch is connected to them because they chose him as the Supreme Court nominee through an outsourced selection process and because they launched a multi-million dollar campaign to support his confirmation. Gorsuch, however, avoided important questions about how, as a Supreme Court justice, he would make decisions independently from those supporters.

Judge Gorsuch was recommended as a Supreme Court nominee by the Federalist Society, a right-wing organization funded by the oil billionaire Koch brothers that has long supported the Trump administration’s agenda and the executive authority to implement it. The conservative organization leading the campaign to support Gorsuch’s confirmation is the Judicial Crisis Network (JCN), which is partly funded by the Wellspring Committee, another group established by the oil billionaire Koch brothers. In launching the largest campaign in any confirmation, the conservative group backing Gorsuch spent $7 million dollars blocking any consideration of President Obama’s Supreme Court nominee, Merrick Garland, and $10 million dollars supporting Gorsuch’s confirmation, which leaves us, as Senator Whitehouse said, “trying to figure out what they see in [Gorsuch] that makes that $17 million delta worth their spending.” It also raises a major concern about Gorsuch’s ability to fairly decide cases independently of these supporters.

Based on Gorsuch’s testimony, he seems unwilling and perhaps unable to appropriately separate his judicial decisions from the views he shares with these interests groups and funders. In his hearing, Gorsuch was unwilling to commit to recusing himself even from matters involving his billionaire supporter Phillip Anschutz who was instrumental in Gorsuch’s Tenth Circuit appointment. In pressing Gorsuch on this further, Senator Leahy pointed out that Gorsuch had already properly recused himself from deciding a Tenth Circuit case involving this particular “billionaire super-donor.” Gorsuch replied, “[Anschutz] is a former client and — and I treated him as I treated my former clients, large and small. And — and, Senator, I’d — I’d have to look at the recusal standards that are applicable to Supreme Court justices.” Gorsuch could have simply agreed that since he had recused himself from cases involving Anschutz on the Tenth Circuit, he would do so on the Supreme Court. Instead he ducked the question. Gorsuch left open the possibility of hearing cases involving even this openly acknowledged supporter.

Gorsuch’s unwillingness to separate himself from cases involving his supporters is all the more troubling considering that many of his current Supreme Court supporters are presently unnamed. Gorsuch testified that he did not know who the funders backing his confirmation campaign are. He also refused to comment on whether disclosure of their identity would be in the public interest. Senator Whitehouse raised the corresponding concern: “how would we know that the partiality question in a recusal matter had been adequately addressed if we did not know who was spending all of this money to get you confirmed?”

A group of senators on the Senate Judiciary Committee have now called on Gorsuch and the Judicial Crisis Network to reveal the dark money sources backing Gorsuch’s Supreme Court confirmation. Gorsuch has been unwilling to commit to separating himself from legal cases involving his supporters, unresponsive to questions about communications with the groups responsible for his nomination, and unable to name the donors behind his confirmation campaign. The senators have the constitutional responsibility to determine whether Gorsuch should be confirmed, and they deserve answers before Gorsuch’s confirmation vote.

A Supreme Court justice must not be tied to special interest groups when making legal decisions for our country. Gorsuch’s connection to his supporters and his alarming responses to questions about them have proven to be yet another reason that he should not be approved as our next Supreme Court justice.