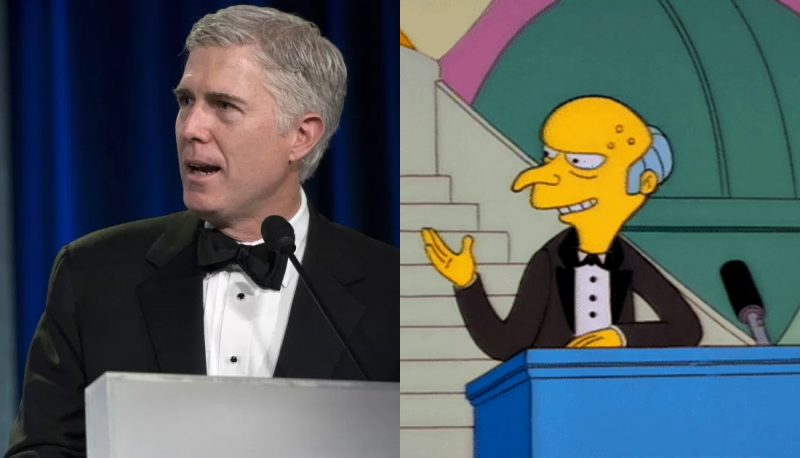 The Dissents of Judge Neil Gorsuch: Far to the Right and Out of the Mainstream

Laughing at the weak and injured — especially when you tried to injure them even more — is classic behavior for a bully and a thug. Last night, Justice Neil Gorsuch showed that that’s exactly what he is.

In a speech to the Federalist Society, he made a joke about a Tenth Circuit dissent he wrote that was one of the cases used to demonstrate why he should not have been confirmed to the Supreme Court. As reported by Ian Millhiser:

A judge may be presented with a law, Gorsuch began his joke, and “immediately know three things.”

One, the law is telling me to do something really, really stupid. Two, the law is constitutional and I have no choice but to do that really stupid thing the law demands. And three, when it’s done, everyone who is not a lawyer is going to think I just hate truckers.

The joke was a hit with the gathered Federalist Society members, who laughed and clapped uproariously after Gorsuch delivered his punchline.

The man who Gorsuch and his colleagues are laughing about is named Alphonse Maddin. Mr. Maddin isn’t a Supreme Court justice, nor is he a high-flying member of the Federalist Society. He is a man who made a living hauling cargo on his truck when his life intersected with then-Judge Gorsuch’s in one of the most callous (and legally unsound) dissents in his career: TransAm Trucking v. Administrative Review Board (sometimes called “the frozen trucker” case).

Maddin’s trailer’s brakes had frozen over, making it unsafe to drive, so he pulled over and called for help. His heat was broken, and he spent hours waiting for promised help. As his worsening symptoms showed he could very well die if he remained, his supervisor ordered him not to leave the cargo. But Maddin chose to save his life and drove off for help (the cargo was fine). His company fired him for abandoning the cargo against orders.

Fortunately for Maddin, Congress had passed a law protecting workers from refusing to operate an unsafe vehicle, just as Maddin had refused to drive the trailer whose brakes weren’t working. The Tenth Circuit upheld an agency ruling favoring Maddin, but Gorsuch dissented. According to him, Maddin wasn’t “refusing to operate” anything at all; instead, he was choosing to operate the vehicle in a way that he’d been instructed not to. And that, wrote Gorsuch, isn’t covered by the law Congress passed to protect truckers, so the company was perfectly within its rights to fire him for not dying.

Sometimes the law requires a bad result. This wasn’t even close to being one of those times, as the other judges on the panel realized. Judge Gorsuch was like “Mr. Burns in a Robe.”

And in his joke to the Federalist Society, Justice Gorsuch was again channeling his inner Mr. Burns.

Had Mr. Maddin been in the audience, I don’t think he would have been laughing. I think he’d have been horrified that everyone else was laughing.

Unless you’re Neil Gorsuch and a member of the Federalist Society. To them, Maddin’s a hilarious punchline.