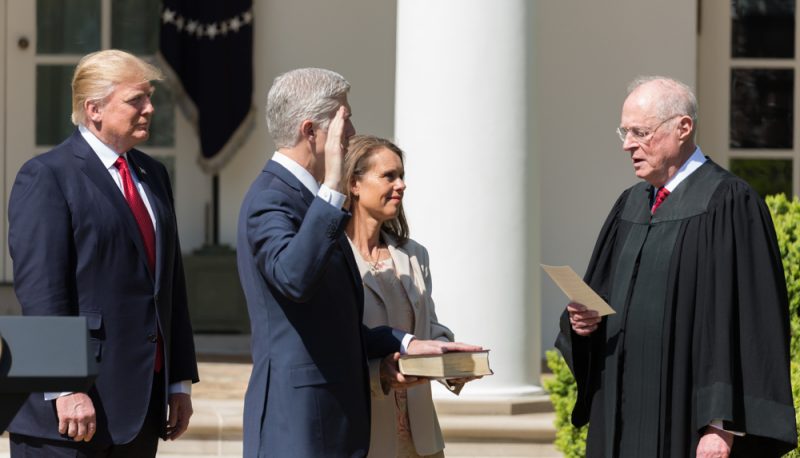 Oral arguments were held today in what is perhaps the most high-profile case remaining to be argued this term: Trinity Lutheran Church of Columbia v. Comer. As discussed in our term preview last fall (when the name was Pauley rather than Comer), this case has the potential to weaken church-state separation provisions in the U.S. Constitution and in numerous state constitutions. Neil Gorsuch’s confirmation to the Supreme Court has increased that likelihood significantly. And based on media reports of the oral arguments, the wall of separation between church and state may be in store for more erosion.

Like the federal Constitution, state constitutions have their own versions of the Establishment Clause. As the founders recognized, separation of church and state is an indispensable requirement of individual liberty, protecting religious institutions from potential interference from the government, and vice-versa. In a number of states, the contours of the separation requirement are stated in greater detail than in the First Amendment. Missouri’s constitution, for instance, is explicit in its prohibition of government funding of churches (directly or indirectly), including funding to help or sustain a religious school.

Missouri has a competitive grant program for organizations to improve their playgrounds. Trinity Lutheran Church operates a religious preschool and daycare program that infuses sectarian instruction throughout the day. Despite the terms of the state constitution, Trinity applied for a grant to improve the children’s playground, and its grant application was rejected because the church wasn’t eligible to participate in the program.

Trinity, represented by the Alliance Defending Freedom, sued the state, claiming that denying it funds for its playground because it is a religious entity violates the U.S. Constitution’s Equal Protection and Free Exercise Clauses. According to the church, Missouri targeted religion for disadvantageous treatment, which can be justified only if the grant program is narrowly tailored to achieve a compelling government interest. Trinity claims there is no such compelling state interest, because (the church argues) the grant would be permissible under the federal Establishment Clause. Trinity also maintains that the program forces adherents to choose between their religion and receiving a generally available public benefit, which denies them full and equal participation in the community and violates the Free Exercise Clause. Trinity gave no assurances to state officials that it would not use the taxpayer-funded playground for religious purposes.

The Eighth Circuit correctly rejected Trinity’s arguments, and the church appealed to the Supreme Court.

PFAW Foundation joined an amicus brief authored by the ACLU pointing out the serious defects in Trinity’s legal argument. A fundamental principle of the First Amendment’s Establishment Clause is that states may not award direct grants to houses of worship. The Court has upheld indirect grants such as vouchers, where parents rather than the state decide whether to spend taxpayer funds on a religious or a secular school. But direct grants to houses of worship contravene the clear meaning and intent of the Establishment Clause. The Founders recognized that churches would either support themselves or not, and that religious liberty would be threatened, not enhanced, if the government could use its taxing and spending powers to favor certain religions or religion in general. In contrast, despite the Establishment Clause, Trinity and its allies would have the Court require state support of churches and other houses of worship.

Justice Gorsuch could have an enormous effect on this case. The Religious Right’s celebration of Gorsuch’s confirmation after having opposed even a committee hearing for Merrick Garland is but one sign that they expect him to be a fifth vote and a willing partner in their ongoing efforts to weaken the Establishment Clause and redefine religious liberty.

Even the justices themselves may have been expecting Justice Scalia’s replacement to be the fifth vote in a 5-4 decision. The Court agreed to hear Trinity’s appeal well over a year ago, shortly before Justice Scalia passed away. But with the Court short a justice for so long, the justices repeatedly delayed scheduling the oral arguments, strongly suggesting that they expected a 4-4 decision and were waiting for a new justice to break the tie. As a result, it was only after Gorsuch’s nomination that the Court put the case on its oral arguments schedule.

But reports on this morning’s oral arguments suggest that while Gorsuch may indeed be in the majority, that majority could be larger than just the five conservatives. The Associated Press reports:

The Supreme Court signaled Wednesday that it will decide an important case on the separation of church and state in favor of a Missouri church that wants state money to put a soft surface on its preschool playground.

The case is being closely watched by proponents of school vouchers, who hope a broad ruling would remove obstacles to voucher programs in some states.

Liberal and conservative justices alike seemed troubled by Missouri’s decision to exclude the church from a grant program that pays for playground surfaces made of recycled tires.

“This church is not going to close its religious practices or its doors because its playground doesn’t have these tires. So I’m not sure how this is a free-exercise question, because there is no effect on the religious beliefs. No one is asking the church to change its beliefs,” Sotomayor said.

It is a truism that oral arguments are not always a reliable predictor of how the Court will decide a case. This case is likely to be decided at the end of the term, in late June.