Gorsuch Still Won't Say If He Spoke About Roe v. Wade - People For the American Way
Skip to main content 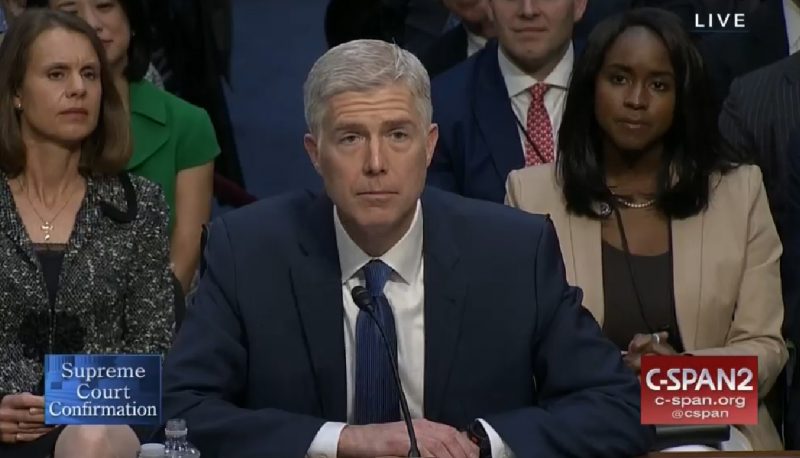 His dodging was particularly apparent when Sen. Blumenthal asked whether there was any mention of the Roe v. Wade case or of abortion in general with anyone at the Heritage Foundation, which had recommended that he be included in Trump’s second list of potential nominees in September of 2016. Gorsuch gave a carefully phrased reply: “To my knowledge, Senator, from the time of the election to the time of my nomination, I have not spoken to anyone that I know of from Heritage” [emphasis added]. Of course, this excludes the time before the election, when Gorsuch may have given assurances to Heritage that they passed on to the Trump campaign. It is unclear why someone with nothing to hide would give such a carefully limited and non-responsive answer to the question.

Sen. Blumenthal didn’t miss the dodge, and he followed up with Judge Gorsuch in his written questions for the record:

During your hearing, I asked you whether you had spoken with representatives of the Heritage Foundation about various topics. You said, “To my knowledge, Senator, from the time of the election to the time of my nomination, I have not spoken to anyone that I know of from Heritage.” As you know, you were included on President Trump’s list of potential Supreme Court nominees—reportedly assembled with the assistance of the Heritage Foundation—long before last year’s election.

a.  Did you have any communications with representatives or employees — including employees on paid or unpaid leave — of the Heritage Foundation or the Federalist Society in 2016 or 2017?

b.  If so, what did you discuss with such representatives or employees?

c.  Did you discuss Roe v. Wade, abortion, reproductive rights, or the right to privacy with such representatives or employees? Please describe the nature and content of the conversation on any of these topics.

Gorsuch was as slippery and evasive in his response as he had been at the hearing:

RESPONSE: I have responded to many questions about my experiences in the nomination and confirmation process, both in the Senate Judiciary Committee Questionnaire and at the hearing. Various people have provided me advice, including Senators, Administration and transition personnel, former law clerks, and friends and family. Some of them are affiliated with the Federalist Society and some are affiliated with the American Constitution Society, societies that provide, among other things, valuable forums for civil discussion and debate on legal questions. As I explained at the hearing, I have made no commitments to anyone on matters that might come before me as a judge.

Discussing your position on constitutional issues surrounding abortion and how you would rule in abortion-related cases is not at all the same as “making a commitment” about how you would rule. The point of Sen. Blumenthal’s question was to find out whether certain subjects were discussed.  Judge Gorsuch chose not to answer the question and, in fact, gave a response designed to make people believe he was answering the question.  That tells us a great deal about his character.

He gave a similarly evasive answer to Ranking Democrat Dianne Feinstein, who had also noticed his dodging of the question at the confirmation hearing.  Sen. Feinstein asked:

Did you speak to anyone from the Heritage Foundation prior to the 2016 election about the Supreme Court? How many conversations with people from Heritage did you have? When did they take place?

RESPONSE: Prior to the 2016 election, to my knowledge, I did not have substantive conversations with someone whom I know to be employed by the Heritage Foundation about my potential nomination to the Supreme Court.

“To my knowledge” can exclude conversations where it was implied but not definitely stated that it was about a potential Supreme Court nomination.  More importantly, “with someone I  know to be employed by the Heritage Foundation” excludes conservative legal activists who are affiliated with, but employees of, the Heritage Foundation.  Sen. Feinstein had asked about “people from Heritage.”  Gorsuch’s chose to narrow his response to cover only employees of Heritage.

We certainly shouldn’t have another far-right Supreme Court justice who does not recognize the constitutional right to abortion.

But even apart from that, we also shouldn’t be confirming someone who — like the president who nominated him — is this slippery, who seems to be hiding something, and who shows such disrespect toward the process set forth in the Constitution he has sworn to uphold.