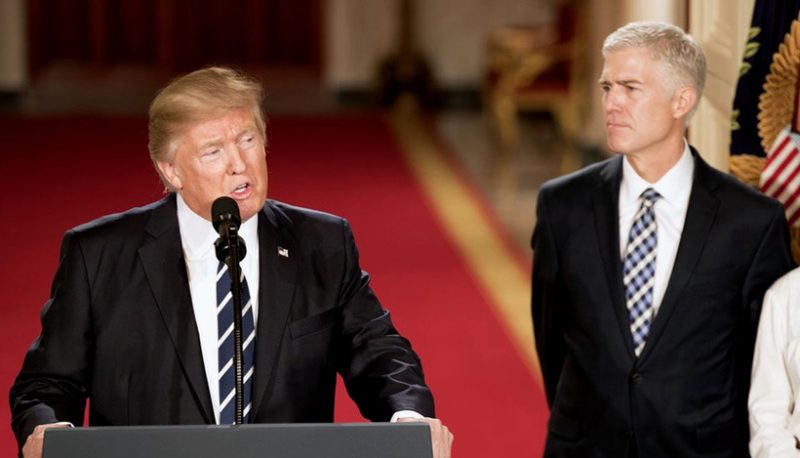 A key question about the nomination of Neil Gorsuch to the Supreme Court is his views on presidential authority—will he defer to President Trump on controversial issues like Trump’s immigration ban and the use of torture? Recently released documents concerning his time as a key Justice Department political appointee in 2005-06 confirm earlier indications that the answer, unfortunately, is likely yes. Although the administration’s document production is woefully inadequate, what has been provided makes clear that Gorsuch was at the center of Bush administration unprecedented efforts to assert dangerously broad presidential power and to limit review by the courts.

Justice Department documents make clear that, as principal deputy to the third-ranking official at Justice, he played a significant role in Bush’s efforts in both the courts and in Congress on legal issues related to terrorism. This included the legal process to be accorded to detainees at Guantanamo Bay and the important case of Hamdan v Rumsfeld, which former Solicitor General Walter Dellinger has called “the most important decision on presidential power ever.”

The Bush administration made two primary arguments in Hamdan. First, it claimed that the president himself had the power to set up military tribunals to try Guantanamo detainees, even though the process omitted key human rights and other protections in the Geneva Convention and the Uniform Code of Military Justice. Second, it argued that provisions in the Detainee Treatment Act of 2005 (DTA) precluded Supreme Court review of the issue and left it to the D.C. Circuit Court of Appeals, which had rendered a decision upholding the tribunals. Both these arguments were rejected by the Court in Hamdan.

Although DOJ has declined to produce “work-product” documents such as comments on draft court briefs, it is clear that Gorsuch played a major role in promoting these arguments in Hamdan. DOJ stated to Sen. Feinstein on March 8 that Gorsuch’s role included “participating in developing case strategy,” reviewing court decisions and court papers to be filed by DOJ, and “discussing litigation options” in the case “in light of the Detainee Treatment Act.” His central role is made clear by a request from DOJ’s office of public affairs that he, along with the solicitor general and his principal deputy, participate in a “background media call” on the day the decision was to be announced. DOJ records show that Gorsuch had been very involved in helping support the inclusion of language in the Detainee Treatment Act and in the National Defense Authorization Act to bolster the position that only the D.C. Circuit should be able to review complaints about the Bush military commissions. Gorsuch pointedly asked several DOJ colleagues in November “where we stand” on the legislative language and if there is “anything we can do to help.” In February, a Republican Senate Judiciary Committee staffer sent to Gorsuch—and to a private lawyer drafting an amicus brief on behalf of Senators Kyl and Graham to support the administration’s jurisdiction-stripping arguments—a Congressional Record excerpt also supporting the claim. Fortunately, the Supreme Court rejected the jurisdiction-stripping arguments in Hamdan, but it’s clear that Gorsuch was trying his best to advance the sweeping Bush claims to unilateral authority and severe limits on judicial review.

Gorsuch’s participation in the issue continued after Hamdan. He drafted post-decision talking points that were approved by the White House that explain that Guantanamo detainees will be given only the “minimal humanitarian protections” required by the Geneva Convention in commission proceedings. He helped to draft, offered to answer questions on, and circulated a July 5 draft of proposed administration legislation that would explicitly prevent habeas corpus or other legal proceedings by Guantanamo detainees, other than limited review of military commission decisions by the D.C. Circuit. Such language was ultimately included in the Military Commissions Act of 2006, which became law shortly after Gorsuch was confirmed for the 10th Circuit.

In 2008, the Supreme Court considered the constitutionality of the provisions which Gorsuch advocated that banned habeas corpus petitions by Guantanamo detainees in Boumedienne v. Bush. In a crucial opinion written by Justice Kennedy, the Court ruled that they were unconstitutional. As Justice Kennedy explained, to “hold that the political branches may switch the Constitution on or off at will would lead to a regime in which they, not this Court, say what the law is.”

While at DOJ, Gorsuch had other involvement in promoting troubling Bush Administration national security–related policies. For example, he worked on talking points to help defend CIA use of so-called “enhanced” interrogation techniques—torture. His work in getting a lawsuit by a torture victim dismissed on grounds of state secrets was praised by the White House. He helped draft speeches and an op-ed defending warrantless surveillance and use of torture despite contrary Congressional provisions.

Some Gorsuch defenders have already suggested that he was simply “representing a client” like a private lawyer. Not so. Documents reveal that he was anxious to receive a political appointment to become a “full-time member of the team” and “help the cause.” And after he had begun on the 10th Circuit, he wrote an effusive letter to Attorney General Gonzales and others at DOJ stating that he “deeply admire[s] the work you are doing to keep the country safe” and that if “ever I can be of any help, please let me know.”

Unfortunately, there is now very clearly a way that Gorsuch can be “of help” to those who advocate vigorous and dangerous assertions of Presidential power—becoming a justice on the Supreme Court and upholding such claims. And if anything, the abuses of such power that we have seen and will see from President Trump could be even worse than those that Gorsuch helped support. For the sake of ensuring that the Supreme Court will truly serve as an independent check on Donald Trump and future presidents, the nomination of Neil Gorsuch to the Supreme Court must be defeated.

Gorsuch argued for unfettered executive authority in the Bush DOJ. How can we trust him to check another overreaching executive? #MuslimBan2 pic.twitter.com/us6taNuedQ