Today, on the three month anniversary of the tragic school shooting in Newtown, Connecticut, the Senate Judiciary Committee approved legislation that would ban certain assault weapons and place limits on high-capacity ammunition magazines. Earlier this week, the committee also approved a universal background check bill for gun purchases that seeks to prevent sales to people with criminal records or a history of mental illness.

Sadly, the gun lobby’s oversized influence on legislators continues to be an unfortunate reality: not a single Republican voted for either bill in committee. Senator Charles Schumer (D-NY) who has been the main sponsor of the background check legislation, had this to say about the vote and of Republicans touting NRA-approved conspiracy theories:

It’s sad. Right after Newtown, there was a view that maybe the right place that we could all come together on was background checks because background checks, unlike some of the other proposals here, which I support, do not interfere with the law-abiding citizens’ right to bear arms,” Schumer said. “I would hope and pray we would debate the rational parts of this bill and not say this bill will lead to confiscation or registration. Nothing in this bill…indicates a scintilla of truth to that argument

Newtown, for its part, is not backing away from the struggle to prevent another tragedy like Sandy Hook. Last Saturday, more than two dozen Newtown bicyclists left on a 400-mile ride to Washington to honor the Sandy Hook victims and “raise awareness for common-sense gun legislation.” Event organizer Monte Frank spoke to USA TODAY about the growing grass-roots movement pushing for meaningful action:

We have gotten to the point where we recognize we have an epidemic of gun violence,” Frank said. “The current situation is not tolerable for a sophisticated and developed nation. We want to be remembered as a town that went to work to change the gun culture in our society and put stronger laws in place to reduce gun violence.

Additionally, a petition initiated by Newtown clergy has already gathered more than 4,000 signatures from religious leaders across the nation calling on Congress to pass meaningful gun violence prevention legislation.

Folks that are cognizant of the history-not just in Germany but elsewhere- look back to the history and say we can’t let that sort of thing happen here.

The NRA leadership loves labeling the organization as a mainstream defender of individual liberty. Yet time and time again NRA officials have demonstrated that their views and tactics are rarely in sync with American public opinion or with reality. They continue to peddle the talking point that gun violence prevention measures are ineffective, despite a study by Boston Children’s Hospital last week that tougher laws on guns can have an effect on homicide and suicide rates. And they continue to see the background check issue as a “wrongheaded approach,” despite new polls in more than 40 congressional districts and 20 states showing voters overwhelmingly support background checks for all gun sales. The NRA leadership’s absurdity on the issue has reached a point now where gun advocates have even begun splitting with the organization over their stubborn opposition to common sense.

However, the NRA is not alone in attempting to prevent effective regulation of guns and promoting reckless policies that leave Americans vulnerable. Groups such as American Family Association and Tea Party Nation have blamed everything from “anti-religious secular bureaucracy” to “teachers’ unions” for the cause of the Sandy Hook tragedy. Others, such as Gun Owners of America have even gone so far as to criticize the NRA for being too soft on gun rights and too willing to compromise. Recently, PFAW released a report chronicling the history and strategies of the radical groups and individuals who are working to prevent meaningful gun violence reform. The report, “The Lobby Against Common Sense: The Right’s Campaign Against Gun Violence Reform and How We Can Defeat It,” is aimed at helping to move the debate in a positive direction by focusing on the radical extremism of opponents of common sense reform. 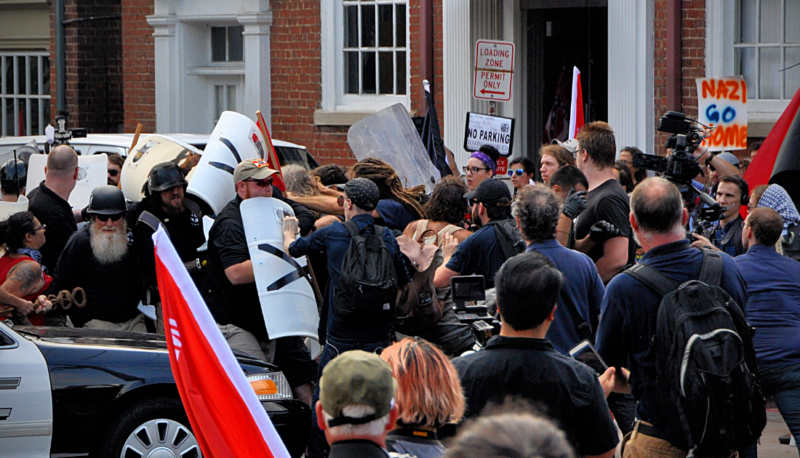 USA TODAY: Charlottesville sends message to the hearts of Americans from the heart of the old Confederacy