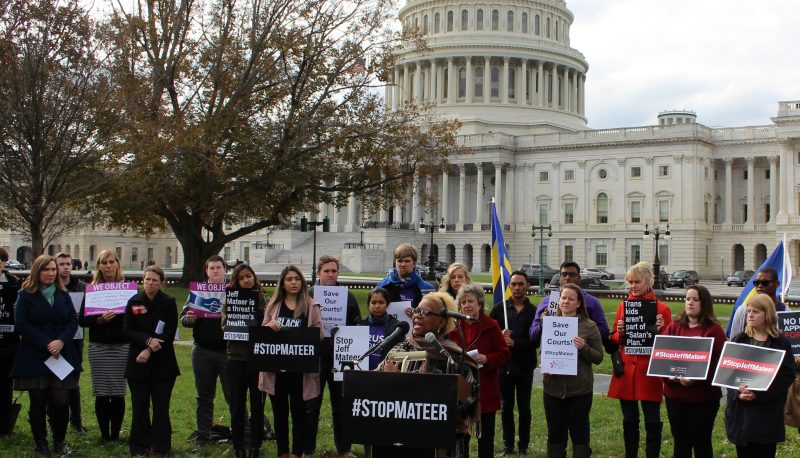 Jeff Mateer And The “Kill The Gays” Conference

The following remarks were delivered by Reverend Leslie Watson Malachi, director of PFAW’s African American Religious Affairs program, at a rally outside the Capitol on Tuesday opposing the nomination of Jeff Mateer to the federal bench.

Let me start by saying I am unapologetically Christian, pro-faith and progressive!

It is because of my faith that “believe” is my favorite word.

I believe in my faith that has always taught me to advocate for the marginalized, to care for “the least of these.”

I believe, as one who is part of a national ministerial alliance, in treating everyone I meet with respect and dignity.

I believe in these values so much that it disturbed me to learn that someone nominated to become a federal judge in Texas has a history of demonizing members of our communities, our homes, and yes, even in our places of worship who are lesbian, gay, bisexual, and transgender.

I am disturbed to know that Jeff Mateer—who the resident of 1600 Pennsylvania Avenue, our highest elected office holder, nominated for a lifetime seat on a federal court—has made dangerous and unacceptable remarks about persons who are a part of my family, your family, our families, our friends and our neighbors. I believe we have a problem!

I am disturbed that in 2015, Mateer chose to speak at a “kill the gays” conference organized by a right-wing figure who has called for the death penalty for gay people. The same year, he made a speech calling transgender children in the first grade part of “Satan’s plan.” Mateer has openly admitted that he discriminates against gay people, because, he says, that is part of his church’s teachings: “I attend a conservative Baptist church. We discriminate, all right. On the basis of sexual orientation, we discriminate.”

Sticks and stones can break your bones and words can certainly hurt you.

No, I do not live in Texas, but I have family and friends who do.

No, I can’t claim to speak for all Christians, but I can say that the God I serve did not teach me to discriminate. I was not taught to tear down but to lift up, to show compassion to all, to do ministry that helps and not harms, to love and not hate.

I thank God I, along with many others, were not taught to label any child as part of “Satan’s plan,” but to care for, embrace all God’s children.

I thank God I, along with many others, were not taught that gay people should be killed but that all should have an abundant life.

Mateer has been nominated for an influential lifetime position as a federal judge and I’m not sure I can believe he can put his personal views aside when it comes to doing his job of judging.

I’m not sure Mateer can be one of our nation’s judges and be able to fairly evaluate the cases that come before him and hand down unbiased decisions. That is, after all, in the job description: to administer justice in a way that doesn’t favor or discriminate against any group of people.

I’m not sure this nominee can be about fairness to a family of a transgender child in Mateer’s courtroom, not sure they could believe they would be treated fairly by a man who has said their child is part of Satan’s plan.

I’m not sure a lesbian or gay Texan seeking justice would receive an impartial hearing in Mateer’s courtroom, a man who has openly participated in a conference organized by someone who says they, thy neighbor, should be killed rather than loved unconditionally.

U.S. senators, those sent to Washington to do what is right and not what is easy, have significant influence when it comes to the judges who are confirmed to serve from their home state.

Sen. John Cornyn says that he didn’t know about Mateer’s hateful comments when he supported Mateer’s nomination to the judgeship. Now that what was in the dark has come into light, Sen. Cornyn must do what’s right and withdraw his support.

I am unapologetically Christian, and I believe no matter what our personal beliefs are or political background is that we should all be able to agree that hate has no place in federal courts in Texas, or anywhere else.