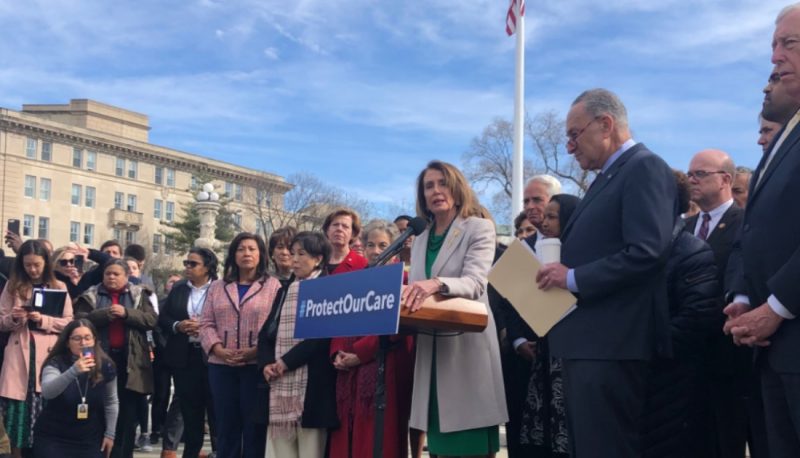 We Need Fairness, Justice, and Equity in Health Care—We Need the Health Equity and Accountability Act

On April 2, People For the American Way joined a coalition of activists at a press conference in front of the Supreme Court in response to the Trump administration’s newest wave of attacks on healthcare. Recently, the president tweeted that he planned to repeal Obamacare and announced that Republicans would not present a health care overhaul proposal until after the 2020 election, leaving many wondering what will happen in the interim for those with pre-existing conditions or without the means to afford health insurance. House and Senate Democrats gathered in front of the Supreme Court to announce their strategies for fighting this latest wave of attacks.

Everybody agrees that ObamaCare doesn’t work. Premiums & deductibles are far too high – Really bad HealthCare! Even the Dems want to replace it, but with Medicare for all, which would cause 180 million Americans to lose their beloved private health insurance. The Republicans…..

The first speaker, Senate Democratic Leader Chuck Schumer, D-N.Y., discussed the consequences of repealing the Affordable Care Act and how the American people would greatly suffer without access to health care. He emphasized that the president has no plan in place to salvage any of the progress made in the health care system over the past decade, and stated that this was nothing more than a politically motivated power play because the president lost some of his clout in Washington after the recent midterm election.

.@SenSchumer: “Don’t let Trump fool you, America. The Republican Party is not the party of healthcare.” pic.twitter.com/IQOuSKyusQ

Next, House Speaker Nancy Pelosi, D-Calif., talked about Republicans’ ongoing efforts to block access to health care for years, stating that “[t]hey think Medicare should wither on the vine.” Speaker Pelosi called upon each Democrat in the House and Senate to pull out every stop to fight this attack because there are real lives at stake. She also stated that they will be introducing a resolution on the floor, forcing every representative to vote so that their constituents can see where their member of Congress stands on this issue.

.@SpeakerPelosi: “The American people deserve to know exactly where their congressperson stands on President Trump’s vicious campaign against our healthcare.” #ProtectOurCare pic.twitter.com/oor9JaRu86

Sen. Jeanne Shaheen, D-N.H., a longtime advocate for health care reform, called upon every member of Congress to do their job to fix the broken system. While she admitted that every bill has its problems, she also argued that incredible progress has been made in ensuring access to health care. This progress could be quickly swept away if Congress refuses to act to save the ACA.

Finally, Rep. Colin Allred, D-Texas, stated that this bill is personal because his mother is a breast cancer survivor and his wife just had a baby, both of which could be considered pre-existing conditions. He stated that he would be willing to work with anyone on this issue if it meant ensuring fair and affordable health care access to every American. He called for bipartisan efforts to save the ACA and emphasized that the fight to stabilize health care is far from over.

.@ColinAllredTX: “No law is perfect which is why I’ll work with anyone to protect pre-existing conditions.” #ProtectOurCare pic.twitter.com/jBHuwY5byV