How Would Gorsuch the ‘Textualist’ Read Trump’s Muslim Ban? - People For the American Way
Skip to main content

How Would Gorsuch the ‘Textualist’ Read Trump’s Muslim Ban? 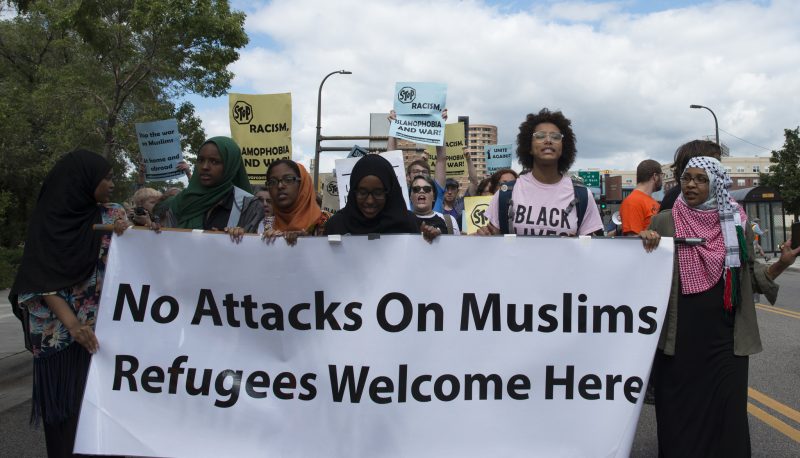 About 200 people gathered in east Minneapolis for a rally and march to to denounce hate speech and hate crimes against Muslims. Photo courtesy of Fibonacci Blue

The recent court decisions against Donald Trump’s “travel ban” Executive Orders – on the grounds that they violate the First Amendment’s Establishment Clause by intentionally disfavoring members of one religion, Islam – present a timely example of something that US senators should strongly consider in assessing the suitability of Trump’s Supreme Court nominee Neil Gorsuch.

An acolyte of the late Justice Antonin Scalia, Gorsuch is described as having a “textualist” approach to interpreting the law. That means that, more often than not, he relies on the text alone in considering laws and the Constitution.

At best, this approach is often used as a refuge for right-wing jurists and lawyers to interpret laws with disregard for their potentially disastrous application in the real world. At worst, it provides a scholarly-seeming rationale for using the law as a weapon against the rights of individuals and vulnerable groups.

The vast problems of Gorsuch’s so-called textualist approach – which ignores the history and context behind the passage or enactment of a law – are made clear in the legal debate over Trump’s travel ban.

Trump campaigned explicitly on what he called a “total and complete shutdown of Muslims entering the United States.” We know from statements from Trump surrogates that this was his intent with the Executive Orders.

In particular, former New York Mayor Rudy Giuliani said on national television that Trump had asked him to form a commission on the ban to determine “the right way to do it legally.”

After the original Executive Order was struck down in court, the Trump administration – by the president’s own admission – then “watered down” the original Order for its second release in ways targeted to allay the legal concerns presented by the Ninth Circuit Court of Appeals.

In other words, they tried to mask the intent of the order – to target Muslims – with language in the new Order that might better comport with the Constitution.

Judge Watson’s excellent decision specifically highlighted the fallacy of what would likely be a textualist’s argument  in supporting the Executive Order, explaining that the law could not be judged in a vacuum based just on its text and that the public record is crystal clear about the underlying intent of the travel ban, stating:

“…a reasonable, objective observer – enlightened by the specific historical context, contemporaneous public statements, and specific sequence of events leading to its issuance – would conclude that the Executive Order was issued with a purpose to disfavor a particular religion, in spite of its stated, religiously-neutral purpose…”

All Americans should be troubled by what a textualist like Neil Gorsuch would find in his review of the Executive Order — judging its constitutionality just by its written text, and excluding consideration of the historical context upon which Judge Watson appropriately relied. And we should be deeply concerned about what that might mean in terms of what a judge like Gorsuch would let the Trump administration get away with, simply by wrapping its hateful, anti-constitutional agenda in a veneer of more benign-sounding legal language.

That is what we mean when we talk about the fear that, if confirmed to the Supreme Court, a Justice Gorsuch would be a rubber stamp for the Trump administration. And it shows why America simply cannot afford another textualist in the mold of Antonin Scalia in these times and with a president who, along with his allies, has laid out a policy agenda violently at odds with our constitutional values.

The ongoing legal saga of Trump’s travel ban provides yet one more view into why it’s so important that the Senate block the confirmation of Trump’s extreme Supreme Court nominee.