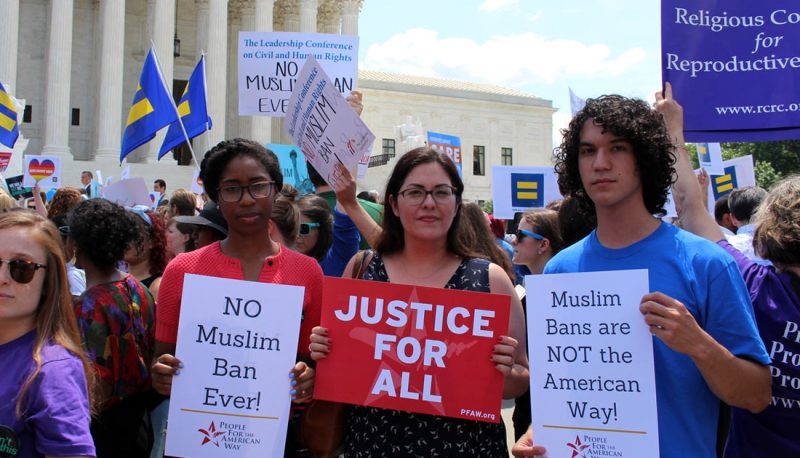 Shortly after the Supreme Court ruled on Trump v. Hawaii, in a 5-4 decision that upheld Donald Trump’s Muslim ban, People For the American Way and civil rights allies rallied in front of the Supreme Court. Chanting “no ban; no wall,” activists sent a clear signal that upholding Trump’s ban on Muslims entering the country is not just flagrantly discriminatory, but is a violation of the First Amendment.

Leaders and advocates representing a wide range of issues, from racial justice to LGBTQ rights and women’s equality, came together to speak out in opposition to the narrow-minded elitists on the Court and the discriminatory policies of the Trump administration. 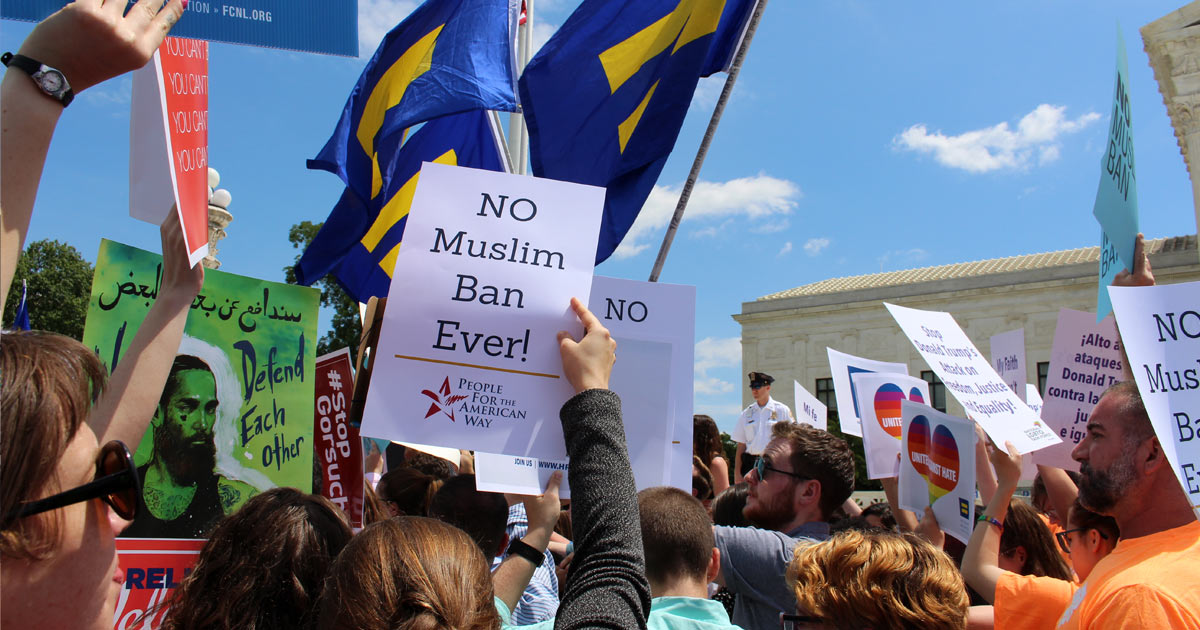 Democratic Rep. Joe Kennedy III of Massachusetts emphasized that the American people need to come together and actively work to preserve the values the country was founded upon. “Etched in stone over my shoulders are a few words that our nation aspires to every single day, and our nation’s highest court failed to live up to today; ‘Equal justice under law,’” said Kennedy. “The challenge we have before us today is an opportunity for us to show that the future belongs to a community that is engaged and caring and resilient and strong. And that we’ll always live up to the values enshrined in our founding documents, and that we will one day make good on that promise above my shoulder. That day is not today and it is heartbreaking.”

.@RepJoeKennedy: The future belongs to a community that is engaged &caring & resilient & strong & will always live up to the values of our country… That day is not today and it is heartbreaking. But this must bring us together. And mark my words, we will win. #NoBanNoWall pic.twitter.com/PSMiHxpc6J

Advocates and policymakers stressed the importance of voting to insure justice for all. Democratic Rep. André Carson of Indiana said, “If we don’t show up to the polls this year and in 2020, our protests are all for naught.”

Trump’s hateful rhetoric and assault on freedom and liberty must be checked. PFAW and its allies remain steadfast against Trump’s bigotry against Muslim communities and will continue to bring our fight to the Hill to make sure that all people’s dignity remains intact.

Three years ago today, the Supreme Court guaranteed marriage equality for all Americans, regardless of who they love. Today’s decision to uphold Trump’s Muslim ban couldn’t stand in starker contrast. It enshrines bigotry and discrimination into our laws.