Hypocrisy on Freedom of Religion at the Supreme Court 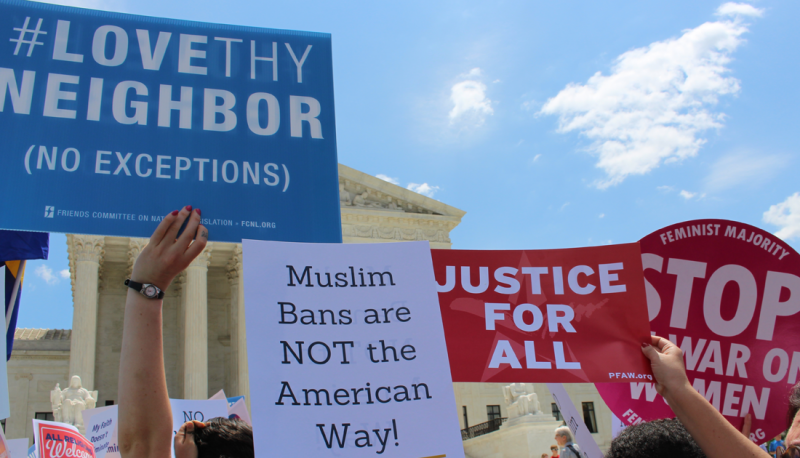 In its 7-2 ruling in Masterpiece Cakeshop, Ltd. v. Colorado Civil Rights Commission the Supreme Court ruled in favor of the baker, asserting that a statement made by a member of the Colorado Civil Rights Commission about the his religious beliefs was constitutionally impermissible anti-religious bias by the state. The Court opined that the state commissioner showed “hostility” and “disrespect” to his Christian views.

In Masterpiece, the Court stressed the importance of avoiding government hostility to religion, warning that “even slight suspicion that proposals for state intervention stem from animosity to religion” would infringe on the Establishment Clause. However, in Trump v. Hawaii, the Court later went on set a clear double standard that for the ultra-conservatives, freedom of religion only applies to Christians.

In her dissenting opinion in Hawaii, Justice Sotomayor questioned the majority’s refusal to acknowledge Trump’s inflammatory comments about Muslims in light of the ruling in Masterpiece. Sotomayor questioned why the same principle that applied to the Colorado commissioner didn’t apply equally to Trump and his numerous “charged statements about Muslims.” The Court failed to adhere in Hawaii to the same standards that it recognized in Masterpiece.

On July 1, Elliot Mincberg, senior fellow at People For the American Way, called out the Supreme Court’s blatant inconsistency between the decision in Masterpiece and the 5-4 majority’s ruling in Hawaii in an op-ed for The Hill:

Even before the Court’s rulings in these two cases, serious concerns were raised about the inconsistency in conservative justices’ views about government hostility towards religion in the two cases. Just about any explanation for the inconsistency has dangerous implications. As the Sotomayor dissent suggests, do these decisions mean that conservative justices will find improper government hostility towards religion only when the hostility is towards a majority Christian faith? As Chief Justice Roberts’ opinion appears to suggest, is clear evidence of religious hostility irrelevant when a decision by the president on immigration or foreign policy issues is being challenged? If the answer to either question is yes, the result could well be to give virtually a free pass to President Trump to engage in conduct hostile and harmful to members of minority faiths in this country.

As Trump prepares to announce a nominee for the Supreme Court seat left vacant by Justice Kennedy’s retirement, it remains crucial that voters hold the Senate accountable for properly vetting nominees and making sure that their views are carefully examined.

THE HILL: Texas, abortion and the tyranny of the shadow docket