Impeachment Kicks Off At The Capitol 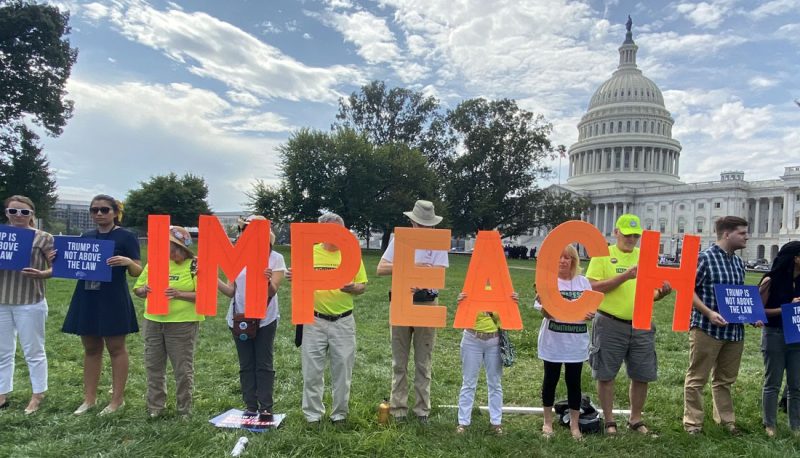 On Thursday, September 26th, PFAW joined our allies at MoveOn, Indivisible and other organizations for a rally on Capitol Hill to support the impeachment inquiry against President Trump and call on Congress to continue taking steps to protect our Constitution from Trump’s corruption.

PFAW Senior Director of Outreach and Public Engagement Diallo Brooks was among the featured speakers calling out Republicans’ complicity and the need for a full investigation into the latest revelations that Trump once again has abused his power and disregarded his oath to uphold the Constitution. Brooks urged the crowd to remember that “no matter what lies that president spews, no matter how cowardly the Republicans in Congress and in the Senate stand, we will fight. We will be here every single day.”

PFAW’s @DKBrooks45: “This is a blatant exploitation of this country — and of the people — and we will stand up every single day. We will come together and lock arms in love and show that there is a different way.” #ImpeachNow pic.twitter.com/LiiMp562Xx

Other speakers at the rally included Rep. Pramila Jayapal (D-Wash.), Rep. Al Green (D-TX), and several other members of the House, including three members of the freshman “squad,” Rep. Ilhan Omar (D-Minn.), Rep. Rashida Tlaib (D-Mich.), and Rep. Ayanna Pressley (D-Mass). Rep. Pressley plainly stated, “It is absolutely time to start formal impeachment proceedings … The American people deserve a president that puts our country before his own personal interests.” Rep. Omar echoed Pressley, stressing that “we are a nation of laws. What separates the United States of America from countries around the world is not just our ability to elect our leaders, but also the protection enshrined in our Constitution that ensures that no one, no one politician, can abuse power.”

Rep. @IlhanMN: “If we do not stand for the rule of law today, the consequences will go far behind our borders. So today we are exercising the power of our wonderful Constitution.” #ImpeachNow pic.twitter.com/0vWRuSDTx9

The rally marked the beginning of a broad coalition effort to demonstrate support for the members of Congress, particularly Democrats from frontline districts, who have come out in favor of an impeachment inquiry. Over the coming days and weeks, events are being held in districts across the country, aimed at supporting the impeachment effort and pressuring Republicans to put country over party.

Trump Impeachment Trump Is Not Above the Law