Inside the Supreme Court, Bearing Witness to History - People For the American Way
Skip to main content

Inside the Supreme Court, Bearing Witness to History

My morning routine yesterday wasn’t very remarkable. The alarm went off with its standard annoying noise, my shower was cold (as is usual in a house of 16 interns fighting for precious little warm water), and breakfast was unquestionably mediocre. But just a block away from my bowl of cereal and skim milk, I knew that in an ornate chamber nine individuals would be considering something truly historic.

Growing up gay in a small, conservative town in southeast Texas, I oftentimes felt disconnected from the issues and events of the wider world. For as long as I can remember, I have had the drive to know, to understand, and to be a part of something much larger than my small beginnings. The cases before the Supreme Court are a perfect example of this. Marriage equality is something that not only affects me personally, but is regarded as one of the defining civil rights issues of my generation. Being in DC during this event was truly a stroke of good fortune and I couldn’t pass on the opportunity to be a part of history.

I headed to the steps of the Supreme Court, foolishly thinking that no one would be in line at such an early hour of the morning. How wrong I was. Spanning the length of the sidewalk were some 200+ people waiting for one of the coveted seats in the Supreme Court chamber. My chance of being a part of history, it seemed, looked uncertain. As I worked my way to the end of the line, one woman in the crowd turned to me and said “Don’t get your hopes up for getting a seat.” Luckily, I’m not used to taking advice from strangers, so I soldiered on. At the end of the line, an older lesbian couple from Ohio greeted me and chided my decision not to bring a jacket. Being from Texas, I’m not used to needing any sort of warm clothing in the month of March. Guess I still have a lot to learn about living in DC.

The first 60 or 70 individuals in line, I was told, would be able to sit through the entirety of the oral arguments. The rest of us who were lucky enough to receive a ticket would be rotated into the back portion of the audience seating. After what seemed like ages in the cold and wind, I managed to reach the front of the line and secure a ticket to sit and listen to a brief three-minute portion of the oral arguments in United States v. Windsor. Better to witness a small part of history than none at all!

After securing all of my belongings into a locker inside the building, we were placed in another line to await our seating assignments. The nervous excitement and uncertainty from the crowd was palpable. For myself and for others in the line, this case, challenging the federal Defense of Marriage Act (DOMA), had the potential to make a real and lasting influence on our lives. How often do you get the chance to witness your own future in the making?

Luckily, I was given a great seat that had an unobstructed view of the proceedings. During the three minutes I was in the room, Paul Clement, the lawyer defending DOMA on behalf of the so-called Bipartisan Legal Advisory Group, was being questioned by Justices Kennedy and Ginsburg, both of whom seemed critical of DOMA’s constitutionality. Commentators and legal analysts have all pointed to Justice Kennedy as the deciding swing vote on the DOMA case, and I couldn’t help but focus on him during much of my preciously brief time in the room. It’s an odd feeling, looking into the face of someone who has the power to make such a difference in your life. As I looked at him and the other justices, I wondered if they knew how much was riding on the case before them. How many future “I do”s would continue to be treated as second-class? Justice Ginsburg summed up current law in a humorous and relevant way: “There are two kinds of marriage: full marriage and the skim-milk marriage.”As you can probably tell, I’m not a fan of skim milk in my marriage or my breakfast cereal. I, and millions of other LGBT Americans including Edie Windsor, don’t want watered down rights. I left the courtroom hopeful that at least five of those nine justices would see that this is no different from the “separate but equal” arguments of the past.

As DOMA and Proposition 8 begin to fade back into the recesses of the American public’s attention, I continue to remind myself that legal recognition for same-sex couples is just one piece in the enormous puzzle for equality. While TIME Magazine’s newest cover declares “Gay Marriage Already Won,” the sad reality is that LGBT Americans continue to be treated as second-class citizens on a host of issues. Today, in 29 states (including my home state of Texas), you can be legally fired from your job just for living your life openly gay. In 34 states, you can be fired for your gender identity. And for thousands of binational same-sex couples and undocumented LGBT immigrants, the threat of deportation remains a daily source of fear and isolation. These issues may not get the media coverage or viral appeal that marriage equality does, but they nonetheless affect the lives and livelihoods of our friends, families, and neighbors in real ways. Let’s not forget that.

The road to “a more perfect union” will be a long and difficult one. But no matter what happens, I will hold these words of Dr. Martin Luther King, Jr. close to my heart: “The arc of the moral universe is long, but it bends towards justice.” I’m doing my best to make sure that becomes reality sooner rather than later. 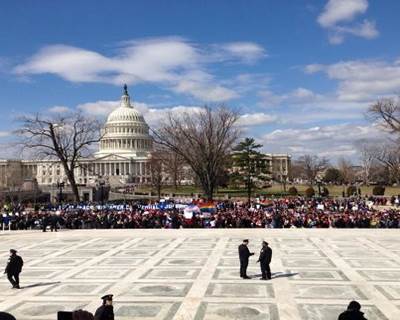