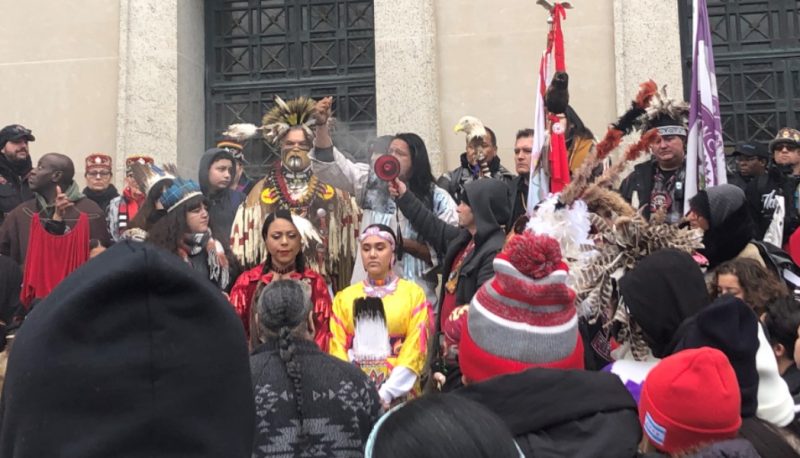 On January 18, People For the American Way attended the Indigenous Peoples’ March in Washington, D.C. Representatives from native communities around the world and allied organizations gathered together to celebrate indigenous cultures and protest the injustices that many still face. A major theme of the march centered on the political climate in the United States and frustration over the government’s treatment of native communities, even in modern times.

It’s a cold day for a beautiful march in honor of indigenous communities around the world. #IndigenousPeoplesMarch #WaterIsLife pic.twitter.com/vjZj8x0U2t

The march began in front of the Interior Department, home to the Bureau of Indian Affairs. Leaders took turns speaking, many using this time to bless the march, pray in honor of their heritage, or share the history of their specific community. A particularly emotional moment came when two members of the Taíno tribe sang a song of gratitude to their ancestors and encouraged the crowd to embrace the “fire” they feel inside and be proud that they are passionately defending a culture that many have tried to stamp out.

Some speakers spoke about the social and environmental issues they continue to be disproportionately affected by. The Keystone pipeline in particular is still a fresh wound for many. Speakers also focused on the many missing and murdered indigenous women, who are disappearing at a disproportionately higher rate. Many attendees shared personal anecdotes to underscore these tragedies.

After the initial speeches the crowd marched through the streets to the Washington Monument and the Lincoln Memorial. The attendees then gathered on the steps for additional speeches from tribal leaders and activists.

One Ojibwe Elder spoke of the history of her people and how they have repeatedly proven strong in the face of adversity and hate. She acknowledged that this time was especially challenging, but called for unity and respect of each other’s role in resisting oppression. Another woman of the Piscataway people described the need to fight back against political injustice stating that “[i]f the water is rising, then so must we.” Finally, a leader from the Meherrin Nation warned against selling their land and stressed the need to save their home for future generations, even in the face of major corporate buyouts.

“Today we stand in solidarity and truth. Today we are visible.”

The Indigenous People’s March represented unity, love, and an appreciation of heritage in a time that seems politically unstable and tumultuous for many native communities. Although some surrounding events received heightened media attention and threatened to overshadow the rally, the message of the march and what it meant to the participants must not be overlooked or diminished in any way.

“Today we are not here separated. We are here as one people.” #IndigenousPeoplesMarch #WaterIsLife pic.twitter.com/iT5xCPePns