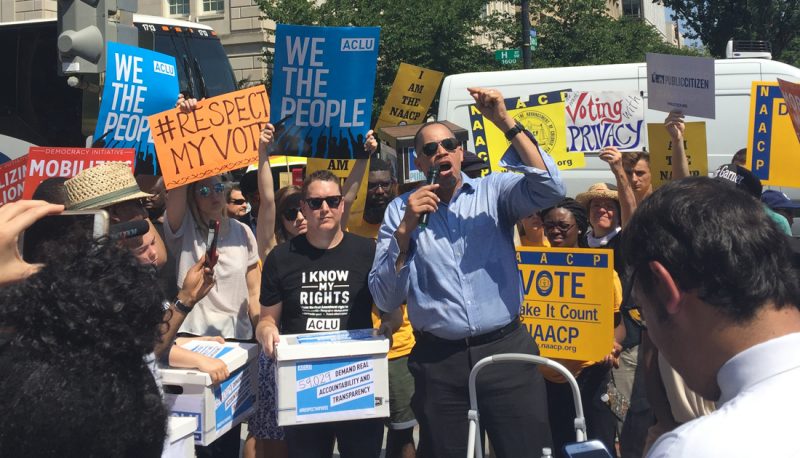 In late August, progressive candidate Andrew Gillum made history when he won Florida’s Democratic primary in a shocking upset to become the state’s first Black major party nominee for governor. Soon after Gillum’s win, Ron DeSantis, his Republican opponent and one of Donald Trump’s earliest and most fervent supporters, implied that Floridians would “monkey this up” if they elected Gillum in November.

After national outrage about his racially inflammatory comments, DeSantis’ campaign team insisted that it was “absurd” to construe his comment as racist. But DeSantis’s racist views resurfaced again this week, after political opposition group American Bridge published excerpts of his 2011 book Dreams From Our Founding Fathers, in which he justifies the legalization of slavery in the U.S. constitution and criticizes Supreme Court Justice Thurgood Marshall for stating that “slavery was misguided from the start.”

Looking at DeSantis’ history of racism, it’s almost impossible to believe his campaign team’s claims. But DeSantis isn’t the only candidate to have made openly racist comments. Virginia’s Corey Stewart, who compared the removal of Confederate statues to an action that the terrorist group ISIS might take, Illinois’ Arthur Jones, a Holocaust denier who calls the historical event “the biggest, blackest lie in history,” and Iowa’s Steve King, who on several occasions has retweeted neo-Nazis, all won their primaries, and their names will be on the ballot in November.

These candidates’ racist comments aren’t just slips of the tongue, either. Every time they dole out another hateful comment, they’re strategically calling upon Trump’s base to demonize the “others” — and using the same racist dog whistles that Donald Trump employed during his 2016 presidential campaign and continues to use as president.

Indeed, Trump’s explicitly racist and bigoted remarks on the campaign trail intentionally played on white Americans’ deep-seated concerns about losing their privilege as our country shifts closer to a majority-minority population. Even Trump’s campaign slogan to “make America great again” employs racially coded language to suggest that America was “great” before Black and brown communities fought for their hard-won rights.

Two years later, there seems to be an unprecedented number of openly racist candidates are on their state’s midterm election ballots — and it’s Trump who enabled them. Their fringe ideologies hearken back to a different century, but racism is alive and well in Trump’s America. Of course, racism and racist anxieties never were dead — the idea of a post-racial America is a naïve myth that Black folks didn’t buy into in the first place. But even still, overt bigotry and racism from Republican Party nominees, like DeSantis in Florida, is shocking. Thanks to Trump, such rhetoric is no longer a deal-breaker for conservative voters.

Since Trump’s election, progressive activists have focused on stopping his bigoted agenda, but equally important is broadening our vision of equity for future generations. That’s why it’s especially significant that candidates like Gillum are winning their primary elections. Progressive change for an inclusive and just multi-racial country is long overdue, and in New York, Massachusetts, Georgia, Maryland, Idaho and Florida, young candidates, women and people of color — the antithesis of candidates like Ron DeSantis — are racking up primary wins in their districts and states.

These candidates’ platforms, which include pushes for bold change like economic justice, Medicare for All, assault weapons bans, police accountability, and criminal justice reform, have set the tone for the upcoming midterm elections that there are new and exciting progressive choices for voters, vastly different from Trump and his cronies’ hateful rhetoric. These candidates are speaking out for racial, gender and economic equity, and they’re energizing voters with a clear message: the time for change is now.

No doubt, the battle is an uphill one, but the future of our nation is at stake. In order for America to be truly great, we need to build bridges, not walls. As for progressives, standing strong against white nationalists while fighting for racial, gender and economic equity must be a shared priority. It’s time for us to stand up and clean house by voting for progressive candidates who represent the possibilities of our future, rather than the hate of our past. America can only be great when we fight for justice and equity for all communities. Let’s send a strong message at the ballot box this November by electing diverse progressive candidates that will fight hard every day — for allof us.