What is a "Trumpublican"? A Republican who has come out in support of Donald Trump in order to win support for right-wing voters, OR a Republican who claims to oppose Trump's agenda of hatred and bigotry, but is still working to protect his interests and advance his agenda — like by holding a Supreme Court seat open for him to fill.

PFAW's new bilingual radio and digital ad campaign, aimed at Latino voters in Arizona, North Carolina, and Florida, is holding the Trumpublicans up for reelection in those states accountable for their support of Trump.

Read more and listen to the radio ads>> 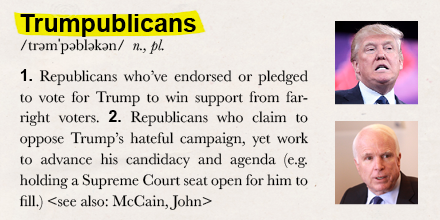 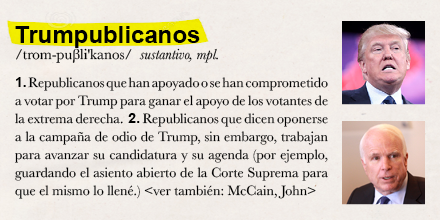 Donald Trump's hateful rhetoric — towards Latinos, immigrants, and other minorities — started on the first day of his campaign, and has not relented, despite his empty attempts to walk back some of his most bigoted remarks and proposals. PFAW's Latinos Vote! program is working to mobilize Latino voters to hold not only Donald Trump responsible, but also the Republicans down the ballot who represent a GOP that is increasingly becoming the Party of Trump.