Jeff Sessions Is Just Getting Started: 7 Things You May’ve Missed Over the Holidays - People For the American Way
Skip to main content

Jeff Sessions Is Just Getting Started: 7 Things You May’ve Missed Over the Holidays 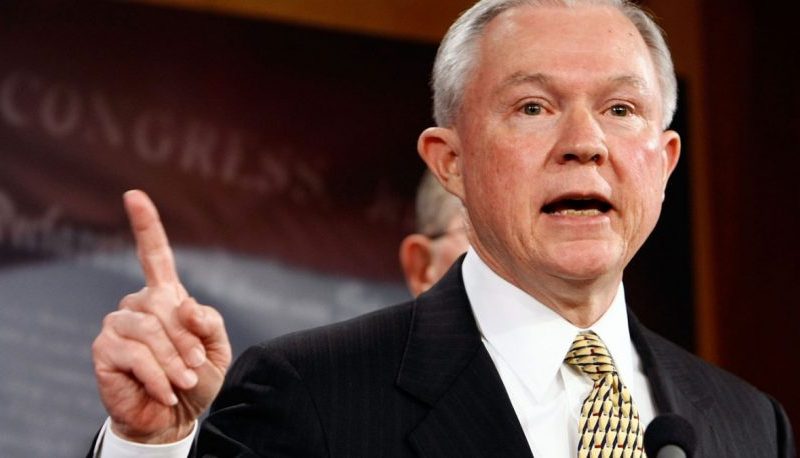 In 1986, the late civil rights activist Coretta Scott King sent senators a nine-page statement opposing Jeff Sessions’ confirmation as a federal judge, writing: “A person who has exhibited so much hostility to… the exercise of [voting] rights by Black people should not be elevated to the federal bench.” Jeff Sessions’ nomination was ultimately rejected by the Senate Judiciary Committee, but he went on to become Alabama’s attorney general and then U.S. senator where he still did considerable damage to civil rights in this country. That’s why, when he was nominated to be Trump’s attorney general, PFAW unequivocally opposed his nomination. Since then, as head of the Department of Justice (DOJ), Jeff Sessions has been a leading opponent of voting rights, LGBTQ rights, immigrant rights, and criminal justice reform, using the Justice Department to push his extreme agenda.

We’ve been tracking the department and the work Sessions and Trump have done to dismantle DOJ’s critical mission. Here are seven things you may’ve missed over the holiday season. As we launch into 2018, we must continue to resist, because it’s easy to see that they’re not slowing down.

On the Friday before Thanksgiving, Jeff Sessions announced that DOJ was ending the practice of issuing guidance memos, which have long been used to clarify for the Department and the public how to interpret and enforce federal civil rights laws. Then in December he rescinded 25 such memos including existing guidelines for enforcing state and local employment services for people with disabilities, avoiding debtors’ prisons, and clarifying citizenship status discrimination.

Less than a week before Hanukkah, news dropped that the Justice Department was opening an investigation of Planned Parenthood, part of a notorious campaign to end access to reproductive health care at the organization’s health centers.

3. DOJ Pushes for a Citizenship Question in the Census

As if the InJustice Department weren’t busy enough, DOJ wrote to the U.S. Census Bureau on December 12 to request that a new citizenship question be added to the 2020 census. Experts say the move could lower response rates by discouraging responses from immigrants who fear that the government will use the information against them—Trump in the past has touted “rounding ‘em all up in a very humane way.” Because the census is used to determine congressional seats and the distribution of federal dollars, this could have enormous effects.

4. Sessions to Judges: No Sympathy for Immigrant Children

5. Trump: “I have the absolute right to do what I want to do with the Justice Department.”

In an interview on December 28, Trump declared that he could do what he wants with the Justice Department. But Trump’s ongoing use of DOJ to try and go after his political enemies and interfere with the Russia investigation threaten the very fabric of our democracy.

At least four times, the Trump administration has tried to block immigrant teens held in custody by Health and Human Services’ Office of Refugee Resettlement from getting the abortions they requested. Each time the courts have intervened and the girls have been able to receive their medical care—even if delayed. But DOJ has consistently worsened the administration’s attack on these girls. In the case of Jane Poe, DOJ sought to disclose the teen’s abortion status to her sponsor—her uncle, who told Poe that he would beat her if she terminated the pregnancy.

7. A “War on Drugs” Marijuana Crackdown

Just four days into the New Year, Sessions rescinded an Obama directive that discouraged enforcement of federal marijuana laws in states where it has been legalized—the next step in his cruel and ineffective war on drugs.