Jobs Relief for Disabled and Unemployed Veterans: Who Could Object?

This morning, I was pleased to be able to attend an event at the White House where President Obama announced plans to move legislation to encourage employers to hire disabled and unemployed veterans by making tax credits available to the employers when they hire these veterans. The President urged Congress to put aside the obstruction that led to the Republican filibuster of the American Jobs Act and several of its component parts (e.g. funds to provide for the hiring of teachers and first responders and funds to put hundreds of thousands of Americans back to work repairing our crumbling bridges, roads and other infrastructure), and instead to pass this piece of the American Jobs Act. 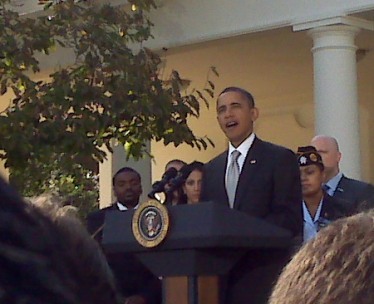 What do we need? JOBS! When do we need them? NOW!