John K. Bush Should Not be Confirmed to the 6th Circuit - People For the American Way
Skip to main content

John K. Bush Should Not be Confirmed to the 6th Circuit 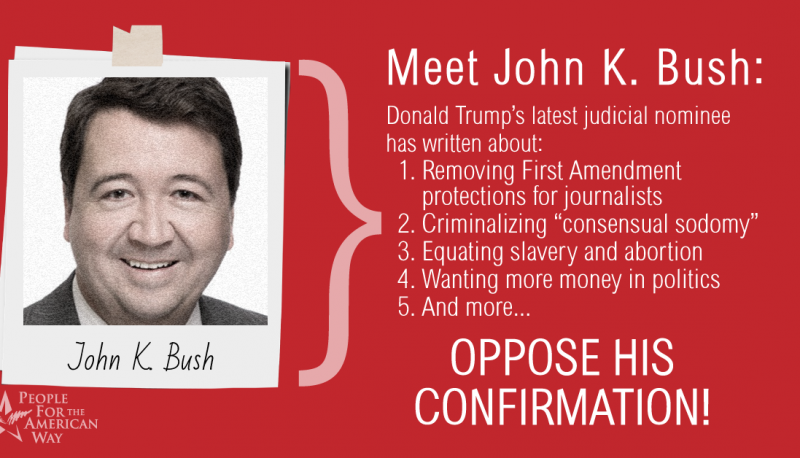 People For the American Way sent the following letter to Senate Judiciary Committee members to express our opposition to the confirmation of John K. Bush to the United States Court of Appeals for the Sixth Circuit. You can download this letter here.

On behalf of the hundreds of thousands of members of People For the American Way, I write to express our strong opposition to the confirmation of John K. Bush to a seat on the U.S. Court of Appeals for the Sixth Circuit.

Typically, when we have concerns about a nominee, we look forward to the hearing to help us determine whether to support or oppose them. But based on Bush’s substantive legal positions and the toxic way he engaged in political discourse while hiding behind a mask of anonymity, it is astonishing that he was even nominated.

He has also called public funding of campaigns “constitutionally dubious” because (he believes) it forces citizens to subsidize candidates’ political speech that they don’t agree with. Bizarrely, he wrote this in the context of a presidential election, in which public funding comes from voluntary check-offs on annual tax returns. He was crudely attacking then-Sen. Barack Obama for foregoing public financing, calling him “the new Monica Lewinsky” and even referenced cigars. Putting aside the highly inappropriate language Bush used, it seems that everything Obama did enraged him so much that he made the obvious analytic mistake of thinking that voluntary donations to public funding are, in fact, involuntary. And even if the public funding came from ordinary tax income, his constitutional theory has no support in case law and would serve only to worsen an already serious crisis facing our democracy.

Similarly disturbing is a needless but troubling aside he made in an amicus brief on behalf of Mitch McConnell in a 2003 state campaign finance criminal case called Martin v. Commonwealth. He wrote:

Adding the completely superfluous phrase in bold suggests he may very well believe that campaign contributions should be subject to the same strict level of scrutiny as campaign expenditures, Supreme Court precedent notwithstanding. Indeed, although recognizing Buckley’s distinction between the two, the same amicus brief nevertheless states that “all political speech enjoys the highest degree of First Amendment protection.” [emphasis in original]

Perhaps even more ominous are Bush’s comments on freedom of the press and freedom of speech about public figures. He has criticized New York Times v. Sullivan, the seminal Supreme Court case protecting media and reporters from defamation suits from government officials they anger, strongly suggesting it was incorrectly decided. In an era where the president has stated in no uncertain terms that he wants to “open up our libel” laws to pursue reporters who write articles he doesn’t like, America cannot afford a circuit court judge whose jurisprudence would empower the president to do just that.

These are only the tip of a very dangerous iceberg. He has also made comments about LGBTQ people and reproductive choice that suggest an inability to be a truly disinterested and fair judge who would follow precedent rather than his own beliefs. He:

Aside from the substance of his beliefs, the manner in which he has communicated them are not even close to appropriate for someone now seeking to be a federal judge. He engaged in political debate through a blog, Elephants in the Bluegrass. But he hid behind a pseudonym as he wrote extremely venomous pieces that go far beyond ordinary boundaries. We do not require nominees to behave as judges at times when they were not on the bench. But we do require them to act with a modicum of decency and self-restraint. Bush has not done this. The only reason his writings have come to light is that he was forced to disclose them in response to the Judiciary Committee’s questionnaire.

For instance, he blogged that the veterans group VoteVets is “verminous.” He trafficked in birtherism, with frequent comments about Obama and Kenya.

He referred to President Obama as “Barry,” a term of derision used by those with the most vitriolic and raging hatred of the president. The contempt for the president is palpable, as is the disrespect for the presidency itself. It strains credulity to imagine someone who shows such burning contempt suddenly becoming a disinterested judge whose opinions of the president have no impact on his thinking.

In a blog post reporting on his experiences at the first day of the 2016 Republican Convention, he treated a scenario associated with dictatorships as if it were nothing. He wrote about cheers for the police. He mentioned that they had removed a protester. He criticized last-minute efforts to deny Trump the nomination. He wrote about parking spaces and costs. As he moved swiftly from one topic to another, he mentioned a woman at the convention who had voted for Bernie Sanders because she hated Hillary Clinton. And then he wrote:

Maybe hating Hillary so much will win this election. That certainly was the theme for many of the speakers last night. A Gold Star mother seethed in contempt for what she said were Hillary’s lies to her about the circumstances of her son’s death. In a night when a former fashion model would be the keynote speaker, debate raged over whether Hillary would look better wearing pantsuits in orange or black stripes.

He immediately moved on to how boring the next speakers were.

His lighthearted comment about what type of clothes Clinton should wear in prison, then breezily moving on to another subject, makes it unmistakably clear that he is untroubled by the dangerous and unprecedented threat to imprison his party leader’s main political opponent. No one who was as undisturbed by this as Bush was could ever be entrusted with our First Amendment rights.

Political activity does not disqualify someone from judicial service. But the manner in which they engage in that activity reveals their character, and Bush’s disqualifies him. A party in his courtroom would have no reason to expect that they would be treated fairly and impartially. But that expectation and its fulfillment are what give legitimacy to the federal courts and are why all parties accept the judiciary’s final decisions, win or lose.

It is hard to imagine why Bush was even nominated, unless the White House and his main sponsor, Senator McConnell, were unaware of the secret blog posts. But now they, members of the Judiciary Committee, and members of the entire Senate are aware. And they provide ample cause to reject Bush’s nomination, if it is not withdrawn.

It is also important to note that lifetime seats on all lower federal courts, but particularly the circuit courts, warrant careful consideration by members of the Senate Judiciary Committee. It is, for that reason that the Senate Judiciary Committee has traditionally scheduled hearings on only one circuit nominee at a time. Unfortunately, Chairman Grassley has inexplicably broken with committee tradition and scheduled two circuit court nominees for the same hearing, Bush and Eleventh Circuit nominee Kevin Newsome. Such stacked hearings are incompatible with the due diligence necessary for fair consideration of each of these critical nominees and should not be permitted.

In light of Mr. Bush’s extreme ideology and his apparent inability to be a fair and impartial arbiter of the law, we urge you to reject his confirmation.