Join us: Rally for Affirmative Action on October 31st - People For the American Way
Skip to main content

On Monday, October 31, the Supreme Court will hear oral arguments in two cases concerning the consideration of race as one factor in college admissions at Harvard College and the University of North Carolina.

We’re rallying at the Supreme Court and online from 8am -12pm ET on October 31st.

Let’s be clear: all students deserve a fair shot at going to college, regardless of their family’s finances, where they grew up, or their racial and ethnic background. But systemic and racial inequities still prevent all students from having equal access to educational opportunities.

Affirmative action helps to expand higher education opportunities to those who have been historically denied by ensuring that the many talents and experiences of students of color aren’t overlooked in admissions processes that tend to be biased against them.

The bottom line? Affirmative action benefits all students – and we need you to join us on Monday, October 31st to show your support!

Although the Court has upheld affirmative action in higher education in the past, that was before Donald Trump and Mitch McConnell created the current 6-3 far-right majority. These cases put educational opportunities for millions of students, especially young people of color, at risk.

In 2003, the Supreme Court rejected an Equal Protection challenge to a public law school’s limited use of race and ethnicity in admissions to promote diversity in the educational experience. In 2016, the Court again confirmed that universities have a compelling interest in the educational benefits that flow from a diverse student body. It was a major victory for Americans who cherish our national ideals of fairness and equal opportunities for all.

With extremists in the majority on the Court, opponents of affirmative action are trying again. One case involves another public school, the University of North Carolina, that is subject to the Equal Protection Clause. The other involves Harvard, which is subject to similar prohibitions against racial discrimination because it accepts federal funding. The lawsuits have been brought by a group called Students for Fair Admissions (SFFA).

SFFA urges the new majority to rule that colleges and universities cannot consider race at all in admission. Using “race neutrality” in this way will have devastating impacts on students of color. This is shown in an amicus brief submitted by the National Women’s Law Center (which People For the American Way joined). When states have banned or severely restricted race-conscious admission policies, the representation of people of color has dropped significantly. 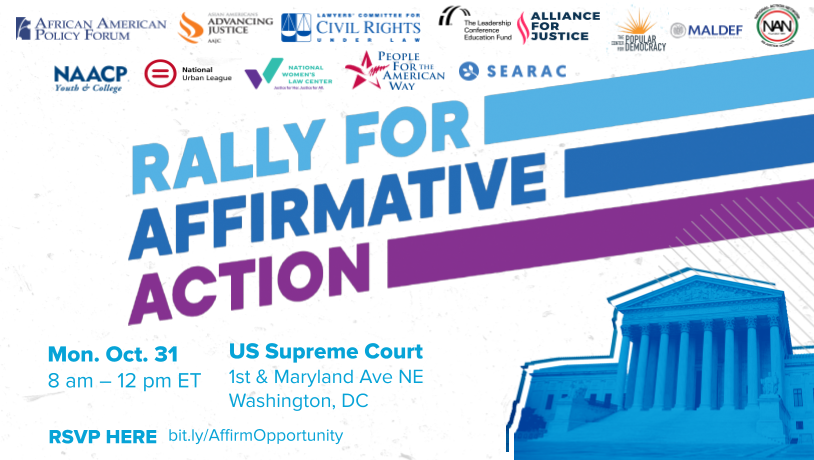 On Monday, October 31st, People For the American Way is rallying with partners like the Leadership Conference on Civil and Human Rights, NAACP, and the Lawyers’ Committee for Civil Rights Under Law to show our support for affirmative action!

All students deserve a fair shot at going to college. Affirmative action helps make sure students who have been historically denied that chance aren’t overlooked in admissions processes.

We need to turn up and show our support for diversity in education at the Supreme Court on the 31st!

Join us from 8am -12pm ET in person at the Supreme Court in D.C. and online.