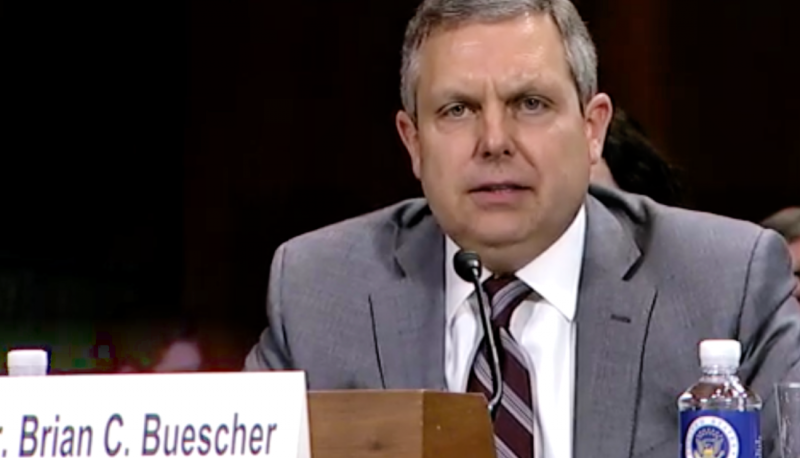 On November 13, 2018, President Trump nominated Brian Buescher to be a federal district judge in Nebraska. The Senate Judiciary Committee held Buescher’s hearing on November 28, 2018 and reported him to the full Senate on February 7, 2019. Floor votes are expected the week of July 22. People For the American Way wrote to senators to express our opposition to the Buescher nomination. You can download our letter here.

On behalf of our 1.5 million supporters nationwide, People For the American Way opposes the nomination of Brian Buescher to be a federal district judge in Nebraska. He has sought to have the state and federal governments prevent women from exercising the constitutional right to abortion that the Supreme Court has recognized and reaffirmed over the past half century. In addition, he failed to state whether he thought Brown v. Board of Education was rightly decided. Agreement with Brown is a core belief that is indispensable to a lifetime position on the federal bench.

Although Buescher has spent most of his career in private practice representing clients, he made his own vision of the law clear when he ran unsuccessfully to be his party’s nominee in the 2014 state attorney general election. That vision is one that does not include justice and equality for women.

During his campaign, he told the Nebraska Right to Life PAC that he opposed allowing any woman to have an abortion unless it was needed to save her own life. He also stated that he would:

support reversing or changing the Roe v. Wade and Doe v. Bolton decisions so that elected legislative bodies (the State Legislatures and U.S. Congress) may once again protect unborn children by limiting and/or prohibiting abortion[.]i

In a campaign interview with the Nebraska Family Alliance, Buescher described himself as “an avidly pro-life person. And I will not compromise on that issue.” While he stated his position in the context of a campaign to be attorney general, it is clearly a statement of his beliefs in any context, not just as an elected official. Litigants seeking to vindicate their rights under Roe and its progeny would be justifiably skeptical that a Judge Buescher would be willing to “compromise” his strongly-expressed beliefs.

Indeed, during that same interview, Buescher explained how federal judges would play a role in the eventual reversal of Roe:

When regulating abortion, my view is this: We should regulate abortion as much as we possibly can. I’m in favor of banning abortion. Unfortunately, under the Roe v. Wade law, or case, and its prodigy [sic], that is not possible, to ban abortion right now. So what I believe we should do is we should assess the situation and try to enact laws that go as far as we can without being invalidated.

So in other words, we need to make sure our laws have a chance of being upheld by the courts. Because if not, we’re really kind of wasting our time because if it’s invalidated, then the law doesn’t ever get enacted. So what we do it we go after abortion bit by bit.”ii

In other words, his planned strategy as attorney general required judges willing to put their ideological agenda over the law in any case not identical in every way to cases already decided. Nothing in his record indicates that he would not be just that kind of judge. Simply promising the Judiciary Committee that he will follow precedent is not meaningful in this context, since his goal is for judges to find ways to uphold restrictions on abortion and thereby undo Roe v. Wade “bit by bit.”

Federal judges have the enormous responsibility of providing equal protection under the law to all litigants, regardless of their own political beliefs. Brian Buescher’s record does not indicate that he would be willing to do that if confirmed. We oppose his confirmation.