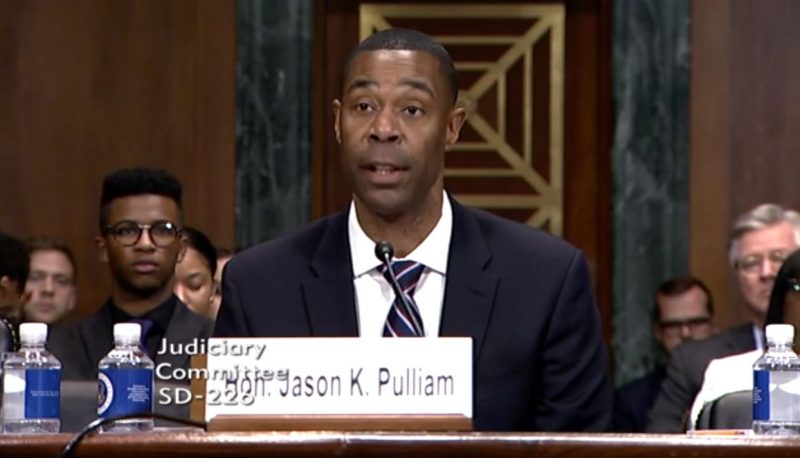 Kacsmaryk Has No Place on the Federal Bench

On March 5, President Trump nominated Jason Pulliam to be a federal judge in the Western District of Texas. The Senate Judiciary Committee held Pulliam’s hearing on May 22 and has scheduled his committee vote for June 20. People For the American Way wrote to committee members to express our opposition to the Pulliam nomination. You can download our letter here.

On behalf of our 1.5 million supporters nationwide, People For the American Way opposes the nomination of Jason Pulliam to be a federal judge in the Western District of Texas. Concerns that his record suggests a bias against transgender people have been magnified by his responses to committee members who asked him about it.

Those concerns were sparked by a majority opinion he wrote as a Texas state judge in a case involving Dino Villarreal, a transgender man asserting paternal rights over two children he helped raise.i He was being opposed by his ex-girlfriend, Sandra Sandoval, who had adopted the children when she and Villareal were living together. After raising the children together for several years, the couple separated. Nearly two years after that, when Sandoval stopped allowing Villarreal to see the children, he filed a “petition to adjudicate parentage” as “a man whose paternity of the child is to be adjudicated,” per Texas law.ii

A different court (one without Pulliam) had earlier dismissed the petition because Villarreal was “born female but identifies as a male” and therefore was not a man, as required by the statute.iii He subsequently obtained a court order officially acknowledging him as a man, a legal process referred to in the state’s marriage statute as evidence of sex. He then continued his effort to establish legal rights relating to the children.

Writing for the state circuit court majority, Pulliam concluded that Villarreal could not file his petition because he was not “a man whose paternity of the child is to be adjudicated.” He wrote that “paternity” in the statute refers to biological paternity, which Villarreal was not claiming. But he included dicta that needlessly cast doubt on the legal rights of transgender people. He used ambiguous wording that obfuscated whether his decision depended on whether Villarreal was a man, or whether he was a man who was asserting paternity. Pulliam seemed to go out of his way to needlessly suggest that a change in legally recognized gender might have minimal legal relevance:

The Order Granting Change of Identity is a recognized form of proof of Dino’s identity and age for the purpose of obtaining a marriage license. It may also be sufficient to acknowledge Dino’s legal status as a man. However, we need not reach such a conclusion in this case because, even if considered a man from birth for legal purposes, Dino’s status as a man is not sufficient to confer statutory standing as, “a man whose paternity of the child is to be adjudicated.” Tex. Fam. Code Ann. § 160.602(a)(3). If all that was required for standing was to be a man, then any man could maintain a suit to adjudicate parentage to any child. We do not believe that to be what the Texas Legislature intended.iv [emphasis added]

Two of his dissenting colleagues criticized Pulliam’s opinion: “That Dino lacks standing stems solely from the fact that he is transgender.” They continued:

What the en banc court has indicated, dangerously in my opinion, is that an individual who the law recognizes as male is not a man because of his anatomical sex unless and until he seeks to unite in matrimony with a female or male. The court fails to consider the effect of its rationale on the plethora of unique circumstances involving transgendered [sic] individuals in custody disputes.

So it is no surprise that members of the Judiciary Committee would seek clarity on the holding and reasoning of this case. Yet Pulliam refused to provide meaningful responses to their questions. In written questions for the record, Sen. Sheldon Whitehouse asked:

Pulliam’s answer was not at all responsive to the senator’s question:

The issue in the Sandoval case was whether the party had state statutory standing to initiate a parentage action. My opinion determined that the party did not satisfy standing under the state statute.

Sen. Whitehouse directly asked if Pulliam “believe[s] that transgender people are deviant.” This is not at all a difficult question for anyone qualified for a lifetime position serving as a federal judge. But Pulliam responded that it would be “inappropriate for a judicial nominee to comment on … his or her personal views on matters of public policy or debate.”vi

It is impossible to imagine any transgender litigant having confidence in an unbiased ruling on their rights from someone who may believe they are “deviant.” Such animus would taint the legitimacy of any decision against a transgender individual, with the public never knowing whether the judge interpreted the law in good faith.

Sen. Cory Booker asked a question going to whether Pulliam would show even minimal respect for a transgender litigant or witness, and the response provided additional evidence of bias:

Would you honor the request of a plaintiff, defendant, or witness in your courtroom, who is transgender, to be referred in accordance with their gender identity?

Pulliam refused to give a straightforward response:

If confirmed, I commit to treating each and every person who appears before me, whether as a litigant, lawyer, or witness, with the utmost dignity and respect.vii

In addition to bias against transgender people, Pulliam’s responses also raise concerns about his temperament. Sen. Booker, noting that “[t]wo judges dissented in the case and one wrote” a criticism of its reasoning, asked the nominee for his response. In his answer, Pulliam not only did not address the question, he also misread it and chided the senator for asserting something the senator never said:

There were not two dissenting opinions. There was a concurring opinion which agreed with my interpretation of the law, and a dissent.viii

In fact, Sen. Booker did not say there were two dissenting opinions. But even if he had, that would not have affected the importance of the legal question being posed, or provided a justification for not answering it. Chiding a United States senator for making an irrelevant mistake is not consistent with judicial temperament or respect for the other branches of government. It is also disturbing that a federal judicial nominee’s petulance was sparked by his misreading of the question.

The nomination process is an opportunity to assuage any concerns that senators may have. But Pulliam’s responses to questions increase those concerns. We urge senators to oppose this nomination.