Justice Ginsburg: The Biggest Mistake This Court Made Is in Campaign Finance

In an interview this week with the National Law Journal, Supreme Court Justice Ruth Bader Ginsburg shed light on what she sees as the biggest mistake the Court has made. Responding to a question about the Supreme Court being viewed as a political institution, Ginsberg volunteered her thoughts on the systemic problem of money in politics:

I think the biggest mistake this court made is in campaign finance, which Justice [Sandra Day] O’Connor could have saved us from. She left. Justices O’Connor, [John Paul] Stevens and [David] Souter (who supported campaign finance regulations) were Republican voters from the time they could vote and came from families that were always Republican. It should be increasingly clear how [money] is corrupting our system, and it is spreading in states that elect their judges.

The 81-year-old Ginsberg has served on the court since 1993, when she was nominated by President Bill Clinton. Many controversial decisions have been handed down by the Supreme Court in recent years, and citing campaign finance as the greatest mistake is significant — particularly in light of the ongoing push for a 28th amendment to roll back the undue influence of big money in politics. The proposed Democracy for All Amendment is gaining steam at the right time. Individuals, organizations, and now even Supreme Court justices are recognizing money in politics as the underlying issue that stymies progress on so many other fronts. 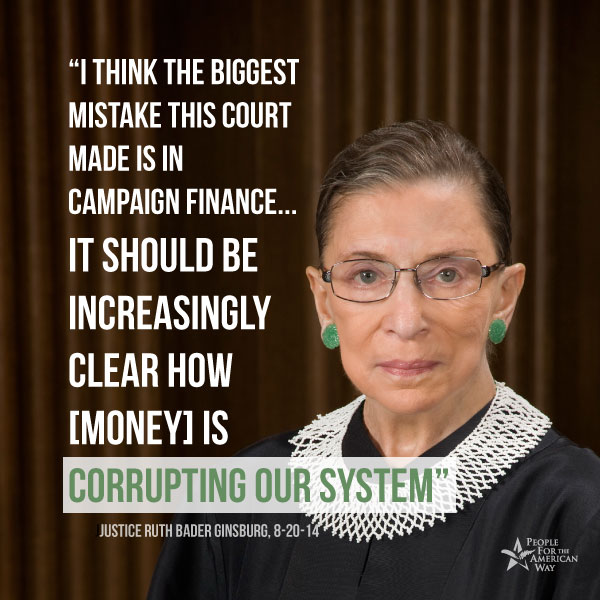