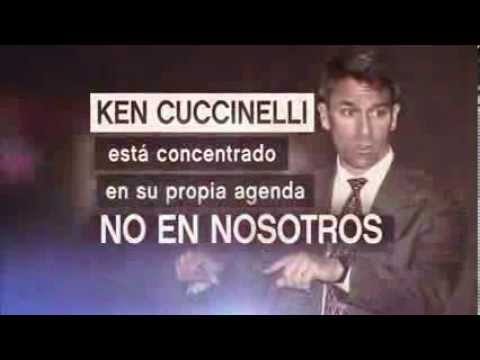 Virginia GOP gubernatorial candidate Ken Cuccinelli appears to be paying the price for his anti-immigrant record. Cuccinelli backed Arizona’s draconian SB 1070 as the state attorney general and as a state senator he proposed several bills targeting immigrants and non-English speakers, and even equated US immigration policy to pest control. Cuccinelli’s harsh comparison was captured in these Spanish-language ads sponsored by People For the American Way:

While Cuccinelli’s nativism may have appealed to the Tea Party fringe, it has upset Latino voters — already alienated by the GOP’s extremist stance on immigration — and the majority of voters who back immigration reform.

But judging by interviews with Latino voters on Tuesday, the ad — which aired heavily on Spanish-language television in the weeks leading up to the election — resonated.

“He talks about our community with no respect,” said Umberto Adrian, a Manassas resident who was born in Bolivia and has lived in Virginia for 30 of his 60 years. “I can’t understand why a professional like him would refer to immigrants as if they are not human.”

Some Latino voters who said they were spurred to action by the commercial appeared to have their own interpretations of what Cuccinelli actually said.

Pedro Delcid, 40, perceived the remark in a slightly different, but equally derogatory, way. “This man was talking bad about our people. He said we reproduce like rats,” said Delcid, who lives in Manassas. “This is the one issue that brought me here today. I have an issue with the way he talks about immigrants.”

It’s not just anecdotal evidence either, as new polling from Latino Decisions sponsored by PFAW and America’s Voice reveals the extent of the damage from the GOP’s anti-immigrant rhetoric and policy positions:

Added Gary Segura, Professor of American Politics and Chair of Chicano/a Studies, Stanford University and Co-Founder of Latino Decisions, "Hostility to immigrants–once a political wedge that worked for Republicans–has clearly now become an Achilles' heel for the Party. Latinos and Asians, climbing towards 10% of the electorate in Virginia, are clearly and profoundly put off by GOP rhetoric on this litmus-test issue for these immigrant-heavy communities. Continued antagonism toward immigration reform has the potential to erode or erase GOP competitiveness in this important and growing purple state."