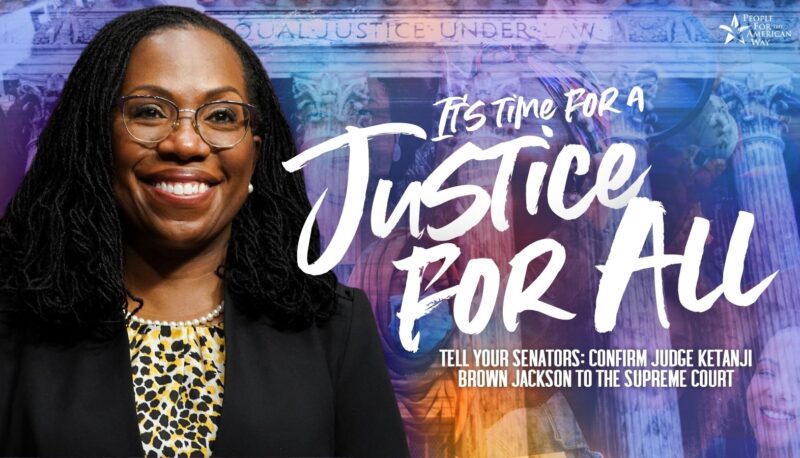 It is with profound joy that I write these words today: Judge Ketanji Brown Jackson has been nominated to become our nation’s first Black woman Supreme Court Justice. From a pool of outstanding Black women attorneys, jurists and legal scholars, President Biden has chosen Judge Jackson for her stellar credentials and brilliant legal mind. We are overjoyed by this nomination; now the Senate needs to move quickly to confirm her.

In the coming weeks we will all get the opportunity to learn more about Judge Jackson’s story and her record. Her legal credentials are outstanding: a double-Harvard alumna, earning both her undergraduate and law degrees with honors; a clerk for three federal judges – including the one she will succeed, Supreme Court Justice Stephen Breyer, who called her “great” and “brilliant”; a star in private practice and as a public defender in Washington, D.C.

The country will also come to know that Judge Jackson wrote nearly 600 opinions in her time as a judge on the U.S. District Court for the District of Columbia, before she was elevated to the Circuit Court – and that she was reversed only 14 times.

But what is just as important as Judge Jackson’s resume is her character, and her deep personal commitment to civil rights. Ketanji Brown Jackson could easily have chosen a lucrative career in private practice, advancing the interests of the wealthy and powerful. Instead, she chose public service. And that speaks volumes.

As a public defender, Judge Jackson represented people who could not afford to hire a lawyer. She chose to stand beside these people in their hour of need, and she has seen the justice system through the eyes of the vulnerable. It’s hard to overstate the importance of that insight in the context of the Supreme Court.

As Vice Chair and Commissioner on the U.S. Sentencing Commission, she worked to end the huge discrepancy between sentences for crack cocaine and powder cocaine, a discrepancy that had a devastating impact on Black communities.

And on the bench, her opinions have shown her dedication to upholding legal protections for people with disabilities, workers, immigrants, freedom of speech, and the environment.  Also evident is her commitment to see the humanity of all people who appear in her courtroom.

In one notable instance, Judge Jackson heard the case of a deaf man who was incarcerated and denied even basic accommodations for his disability. Without an ASL interpreter, he could not understand directions. Another prisoner attacked him and he was put in “protective custody” that turned out to be solitary confinement — a decision he was unable to understand.

Judge Jackson ruled that the correctional facility had broken the law. Not only that, she wrote pointedly and movingly about the significance of laws that protect the rights of people with disabilities. As she put it, “an entity that provides services to the public cannot stand idly by while people with disabilities attempt to utilize programs and services designed for the able-bodied.” That is a moral truth.

And of course, Judge Jackson’s own lived experience as a Black woman enriches her perspective about so many aspects of day-to-day life in the United States. This is a perspective that has never, ever existed on the Court, in all its 233 years.

This perspective is urgently needed now for many reasons, not least of which is because we have reached a point in our history when racial equity and civil rights are facing more attacks than they have in decades. Just as Justice Thurgood Marshall was a justice for his time, joining the Supreme Court at the height of the civil rights movement in the 1960s, Judge Jackson is needed now. There could be no better time for the voice of a brilliant and insightful Black woman on the Court, holding the line for truth and accountability.