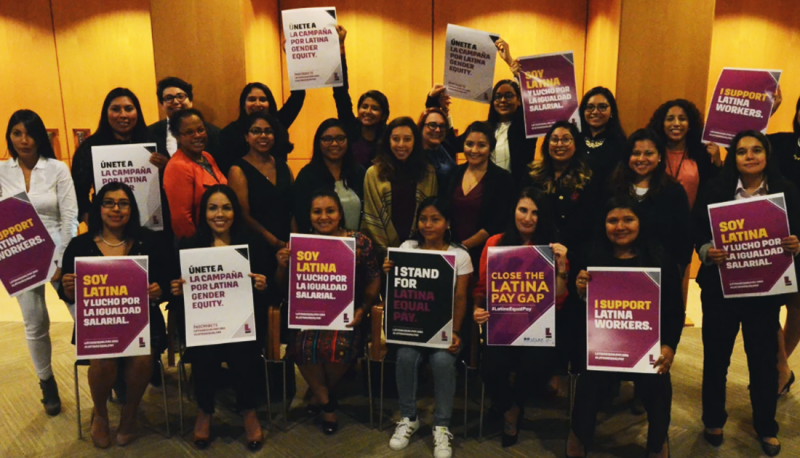 On November 2, I had the privilege of attending the Latina Equal Pay Day summit in Atlanta, Ga. as a LCLAA Trabajadoras Fellow. We heard from prominent Latina leaders on how pay equity affects issues like health care, paid leave, and sexual harassment in the workplace.

It takes 10 long months for a Latina to catch up to a non-Hispanic white men’s annual pay because Latinas earned 53 cents to the dollar. https://t.co/MEeGrD9SIz #LatinaEqualPay #Trabajadoras #DemandMore

Civil rights icon and PFAW board member Dolores Huerta spoke at the event, and emphasized that women of color can bring more to the table in positions of leadership because they know firsthand the impact that equal pay and other equity issues have. Huerta motivated crowd attendees by saying, “We will never have peace in the world until women take power.”

A pay gap this severe has an immediate impact, from being able to pay for food and medical expenses to securing child care and affordable housing. https://t.co/MEeGrD9SIz #LatinaEqualPay #Trabajadoras #DemandMore https://t.co/wQ9ae150sB

In one panel, Esther López, International Secretary-Treasurer for the United Food and Commercial Workers, emphasized how often sexual harassment intersects with pay equity, and reiterated the sexism and sexual harassment faced by working Latinas. For example, Latinas and other women are often asked for sexual favors to accommodate shifting schedules in in their children’s daycare hours or other urgent issues.

In another panel, Mónica Ramírez, co-founder and special advisor at Alianza Nacional de Campesinas, contextualized Latina pay inequity on a long-term scale, and compelled attendees to remember three numbers: 53, 73 and one million. Because Latina workers make only 53 cents to a non-Hispanic white man’s dollar, it takes a Latina 73 years to make what he would make in a 40-year career. And in her lifetime, a Latina worker loses more than $1 million due to the wage gap.

In the afternoon, separate and distinct from the summit, Gente4Abrams hosted a Latina canvassing event for Georgia gubernatorial candidate Stacey Abrams. The organizers’ contagious energy made me want to stay all weekend to canvass with them and engage Latina voters to support progressive candidates like Stacey Abrams. Huerta exclaimed, “We are going to tell Trump that if he is going to create a wall on the Mexican border, we are going to create a wall in Washington D.C. in Congress!”

Whether it was our excitement and energy or the tacos we were promised at the day’s end, I walked away from my experience that day motivated to fight for and implement change.

I also realized at the summit that sometimes people don’t know what they don’t know until someone takes the time to educate them and answer questions about key issues like workers’ rights. As Mir Harris, manager of operations and community engagement at Time’s Up, said, “Often, folks don’t know enough about the issues or why people stand with those issues, and we need to have conversations about it because otherwise, we often leave each other in the dark unintentionally.”

Especially after this week’s midterm election, I’m grateful for the lesson I learned: every voice matters and we must do what we can to fight for change.