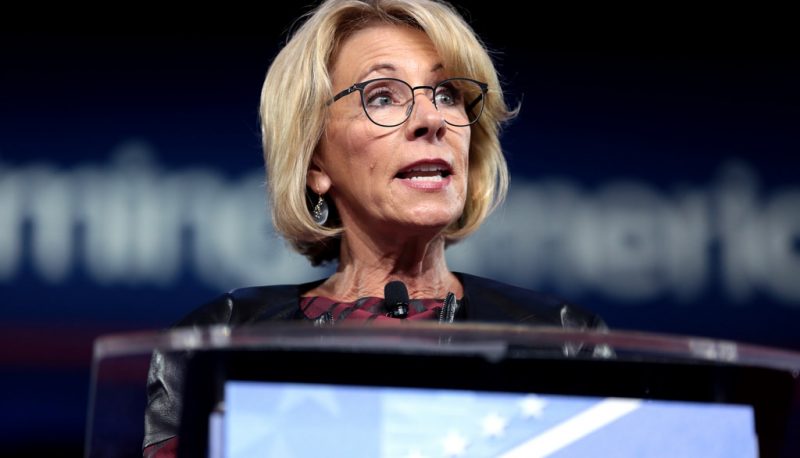 On September 20, the public comment period closed for evaluating a range of existing U.S. Department of Education regulations. Less than 36 hours later, Education Secretary Betsy DeVos announced the rescission of Obama-era Title IX guidance for how schools should address sexual violence. Secretary DeVos apparently didn’t bother to consider the hundreds of thousands of students, parents, and school personnel who urged her to keep the guidance in place. People For the American Way also submitted comments, agreeing that the guidance has spurred schools to address cultures that for far too long have contributed to hostile environments that deprive many students of equal educational opportunities. Following the September 22 rescission announcement, PFAW joined the National Women’s Law Center and more than 100 other organizations and individuals calling Secretary DeVos out for endangering the safety and lives of students. You can download this letter, with footnote, here.

We the People, who have spent years actually working to prevent and address sexual assault in schools, are deeply troubled that Secretary Betsy DeVos is putting the safety and lives of students at risk. On Friday, she continued her reckless campaign to destroy the laws and processes in place to protect students from sexual assault and allow all students an equal access to education. Her latest move—condemning and rescinding existing guidance documents on campus sexual assault, and replacing them with a poorly developed interim set of “Questions and Answers”—breeds chaos and uncertainty. Everyone on campus loses in the process.

Schools across our country—from universities to elementary schools—face very real and difficult challenges in meeting their obligations to prevent and address sexual assault. Students’ lives are at stake. So when students and school administrators asked for assistance, the Department of Education answered by issuing the 2011 Dear Colleague Letter on Sexual Violence and, in 2014, a set of Questions and Answers to respond to concerns raised by schools and students. The 2011 and 2014 Guidance did not make new law or change legal standards. Instead—drawing from dozens of investigations and reflecting the input of students, faculty, administrators, staff, attorneys, sexual assault response teams, counselors, student advocates, medical personnel, parents, law enforcement, prosecutors and campus police—they clarified both the protections afforded to students and schools’ accountability for addressing and preventing sexual assault under federal law.

Secretary DeVos is engaged in a dangerous effort to roll back, rather than improve, protections for all students. She has done little or no work to engage or understand sexual assault. For example, she points to a small handful of one-sided and cherry-picked anecdotes of how complaints of sexual assault have been improperly addressed on campus to justify rescinding the Guidance. Her justification doesn’t hold up: each of her anecdotes involve problems that arose because schools did not follow the Guidance –problems that could effectively be addressed by implementing, not scrapping, the Guidance.

Secretary DeVos continues to show callous disregard for the thousands of students who are subject to sexual violence and abuse every year. Instead, she is very clear that her main if not sole concern is the tiny number1 of students wrongfully found responsible for rape, without any evidence that this is a wholesale problem or extends beyond the few one-sided anecdotes she provides. And while she claims that the rights of the accused have not been fairly protected, the Guidance requires that campus policies and procedures be “adequate, reliable, impartial, and prompt and include the opportunity for both parties to present witnesses and other evidence.”

So what is her idea of fairness? Changing those policies and procedures to permit survivors to be cross-examined by their rapists. Limiting the right to appeal to accused students, thereby leaving survivors with no recourse on appeal. Giving schools an unlimited amount of time to resolve complaints of rape, even though that means many students will drop out of school in the meantime.

Secretary DeVos suggests that the Guidance was issued without public input and did not reflect the concerns of stakeholders. She is entirely wrong. What is true is that her new mandates on Friday came less than 36 hours after the public comment period closed on Department of Education guidance and regulations. She didn’t bother to consider the comments of hundreds of thousands of students, parents, and school personnel who asked that she leave the Guidance in place. Making matters worse, all of the reasons she gives for rescinding the Guidance are directly contradicted by what the Guidance actually says. We cannot help but wonder whether Secretary DeVos has even read the Guidance.

We the People have long worked to prevent and address sexual assault in schools. We have conducted surveys to assess the challenges and needs of students and of schools. We have taken part in campus sexual assault proceedings as students, administrators, attorneys and counselors. We have conducted hundreds of interviews to determine how complaints of sexual assault are being addressed. We have addressed complaints raised by students accused of sexual assault. We have engaged with school administrators and law enforcement to understand what works, and what tools and resources need to be revised or developed. We worked with (and in) the federal government in developing the Guidance and in coordinating dozens of listening sessions and campus meetings to hear the concerns of stakeholders.

We the People rely on facts. The fact is that Secretary DeVos’s new interim guidance creates ambiguity and chaos, not clarity and fairness. As a result, she has endangered the safety and lives of students in schools across the nation.

The following individuals are listed with their affiliations for identification purposes only: