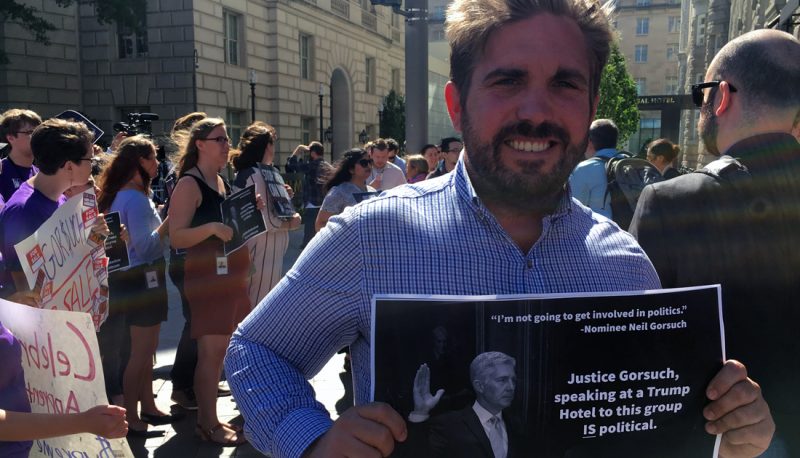 On September 28, U.S. Supreme Court Justice Neil Gorsuch delivered a keynote address for The Fund for American Studies (TFAS), a conservative group celebrating their 50th anniversary at Trump International Hotel in Washington, D.C. Amid the ongoing furor over Trump’s own conflicts of interest between his business properties and his role as president, Gorsuch’s appearance at the TFAS event raises new questions about his adherence to judicial ethics, according to People For the American Way, NARAL Pro-Choice America, and six other organizations in a letter sent to Chief Justice John Roberts. You can download this letter, with footnote, here. Gorsuch was confirmed as Trump’s first Supreme Court pick back in April after Obama nominee Judge Merrick Garland faced unprecedented obstruction following Justice Antonin Scalia’s death in February 2016.

On September 28th, Justice Neil Gorsuch is scheduled to deliver the keynote address at the 50th anniversary celebration of The Fund for American Studies, a well-known conservative organization that promotes “limited government and free-market economics.” The scheduled venue for this event is the Trump Hotel on Pennsylvania Avenue in Washington.

Yet as you know, on October 18th, three weeks after Justice Gorsuch’s scheduled keynote, U.S. District Court Judge George Daniels, of the Southern District of New York, will hear oral arguments in Citizens for Responsibility and Ethics in Washington v. Trump, a lawsuit alleging that President Trump is violating the Constitution’s emoluments clause by accepting payments from foreign governments through various properties bearing his name, including the very same Trump Hotel in Washington that is set to host Justice Gorsuch.

Washington, D.C., is, of course, a city built for conventions, gatherings, ceremonial dinners, and other like events. The city is also home to over 31,000 hotel rooms, including several 5-star hotels which have hosted foreign heads-of-state, international celebrities, and the wealthiest titans of corporate America. Yet while the Trump Hotel in Washington, D.C., boasts some of the poshest accommodations and convention services in the city, since the election of President Trump, as a venue it has taken on a uniquely political and partisan role.

In their filing, Citizens for Responsibility in Washington argues that the Trump International Hotel has become a channel for foreign influence, having “specifically marketed itself to the diplomatic community.” One foreign diplomat bluntly stated the political value of paying to stay in the Trump Hotel and use its services: “Why wouldn’t I stay at his hotel blocks from the White House, so I can tell the new president, ‘I love your new hotel!’ Isn’t it rude to come to his city and say, ‘I am staying at your competitor?’”

And beyond the emoluments consideration, the hotel itself has become a partisan, political one-stop device of extortion. The Washington Post reported that the Trump Hotel “changed Washington’s culture of influence,” and that “the hotel’s managers press conservative, Republican and Christian groups to do business where they can rub shoulders with Trump’s Cabinet.”1

This is nothing Washington has ever seen. For the first time in presidential history, a profit-making venture touts the name of a U.S. president in its gold signage. And every cup of coffee served, every fundraiser scheduled, every filet mignon ordered feeds the revenue of the Trump family’s private business.

First, while The Fund for American Studies is not a foreign entity, Justice Gorsuch’s appearance at the Trump Hotel broadcasts a clear indifference to the emoluments argument to be heard in federal court two weeks later, in a case that many expect the Supreme Court to eventually decide. While an educated legal professional could provide a precise distinction between patronage from foreign governments and patronage from domestic partisan entities, to the public the Trump Hotel appears simply as what it is: a paid gateway to presidential influence that operates under the color of presidential approval. Justice Gorsuch, in accepting an invitation to keynote an event, shows disregard for the Court’s ethical standards and traditions, for its sacred reputation, and, bluntly, for basic common-sense.

Second, in an era of ruthless ideological divisions, Justice Gorsuch’s decision will undermine the Court’s public legitimacy as an entity above partisan politics. In fact, many consider Gill v. Whitford, the gerrymandering lawsuit before the Court, to be the most important, democratically consequential case about partisan power—and its undemocratic abuse—in modern political history.

Of course, Supreme Court Justices of all stripes routinely speak at and attend events hosted by ideological organizations. Yet the unique significance of the Trump Hotel presents a higher ethical concern, because the venue itself is steeped in adversarial partisan politics and the widely-reported appearance of corruption, if not explicit illegality.

As Chief Justice, you have shown great care to protect the prestige and public legitimacy of the Supreme Court, the branch of government that most Americans treasure as above the partisan divisions that have seemingly overtaken Congressional and Presidential politics and elections.

In 2011, you wrote in your Year-End Report that while the judicial code of ethics does not explicitly apply to sitting Supreme Court Justices, “[a]ll Members of the Court do in fact consult the Code of Conduct in assessing their ethical obligations,” and that “we are all deeply committed to the common interest in preserving the Court’s vital role as an impartial tribunal governed by the rule of law.”

In accepting an invitation to speak to a conservative group at the Trump Hotel, Justice Gorsuch may have violated both the letter and spirit of judicial ethics, and threatened the democratic legitimacy of the Supreme Court.

We write to ask the following:

First, what ethics rules will apply when any related emoluments clause case comes before the Court? And second, will the Court provide public transparency and any public process around whether Justice Gorsuch would need to recuse himself from such a case?