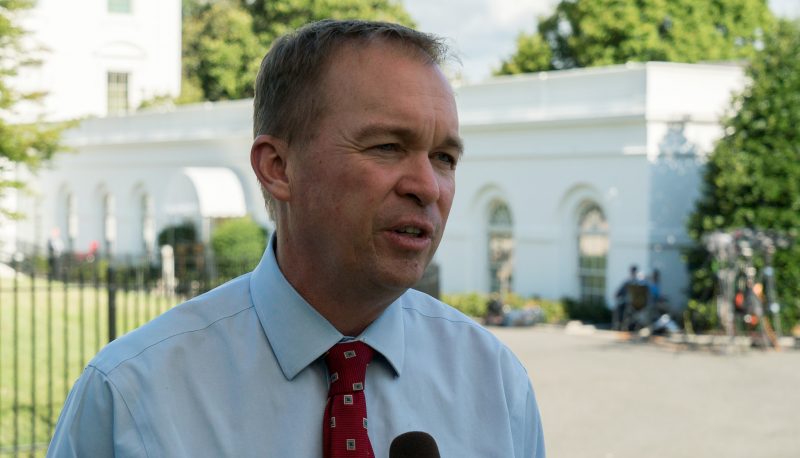 On September 8, President Trump signed legislation that includes a three-month extension for government funding and the debt ceiling. December will now be a critical test for Trump and the GOP Congress—whether they will prioritize your needs or continue on their current course of working for wealthy people and corporations. As soon as December’s deadlines are met, the fight over next year’s funding begins, and family planning advocates have already put the Trump administration on notice. People For the American Way is among the groups asking Budget Director Mick Mulvaney to invest in high-quality family planning and preventive services. You can download this letter, with footnotes, here.

The undersigned organizations collectively represent millions of providers, patients, administrators, researchers, and advocates who have a mission of supporting and protecting federal funds for critical, cost-saving programs that ensure millions of individuals and their families can access high-quality family planning services. We share the approach of former President George H.W. Bush, who, as the lead congressional sponsor of the legislation that created the Title X program, said in 1969:

We need to make population and family planning household words. We need to take sensationalism out of this topic so that it can no longer be used by militants who have no real knowledge of the voluntary nature of the [Title X national family planning] program but, rather are using it as a political stepping stone. If family planning is anything, it is a public health matter.i

The President’s last budget proposal regrettably failed to advance this commonsense public health goal. Instead of bolstering our country’s most vital public health functions, the FY18 budget directed Congress to slash and dismantle a number of essential federal health programs on which people with low incomes depend for critical family planning and preventive care. For example, the FY18 budget plan proposed to radically restructure Medicaid in a manner that would have resulted in billions of dollars in reduced federal support, requested sweeping cuts across a variety of block grants to states and key programs operated by the U.S. Department of Health and Human Services and Centers for Disease Control and Prevention, and would have blocked low-income and uninsured patients from going to Planned Parenthood for basic health care, including contraception and cancer screenings. It is difficult to overstate the harms that these unwarranted actions would collectively impose on families and communities that are already struggling, particularly for populations that disproportionately experience health challenges and inequities. In FY19, the President has an opportunity to change course and focus on improving the health of communities by investing in access to high-quality family planning and preventive services.

The nation’s family planning safety net leverages multiple public funding sources to deliver care to predominantly low-income, uninsured, and underinsured individuals and to those seeking confidential care. Providers of family planning services include state, county, and local health departments, as well as hospitals, family planning councils, Planned Parenthoods, federally qualified health centers, and other nonprofit organizations. The breadth and diversity of these safety-net health centers help ensure that family planning is accessible to and affordable for communities across the country. The providers’ programs are largely anchored by Title X, the nation’s only dedicated source of family planning funds, and Medicaid. These programs represent, on average, 19% and 39% of a health center’s revenue, respectively. The remaining comes from other federal grants, private insurance reimbursement, state and local government support, patient fees, and other funding, such as grants from private foundations.ii

In 2014, 20.2 million women were in need of publicly funded family planning services, and that number continues to increase annually. However, with current funding levels, the publicly funded family planning network only had sufficient resources from these various public and private sources to meet the needs of 7.8 million people.iii To sustain the family planning safety net’s ability to keep its doors open to communities in need, we request continued investments for the following essential federal programs:

The Title X family planning program, whose authorizing language was chiefly sponsored by then-Representative George H.W. Bush (R-TX), passed the House with only 32 dissenters and cleared the Senate unanimously, and was signed into law by President Richard Nixon in 1970. The program remains a cornerstone of the publicly funded family planning safety net. Six in ten women seen in a Title X setting have reported that a Title X-supported health care center was their usual source of medical careiv and four in ten women said it was their only source of care.v In 2015, Title X-funded health centers helped prevent approximately 822,300 unintended pregnancies, thereby preventing 277,800 abortions and 387,200 unplanned births.vi In addition to direct clinical care, Title X also supports critical infrastructure needs, including new medical equipment and staff training, that are not reimbursable under Medicaid and private insurance. We urge the administration to build on its FY 2018 level-funding of the program and support a modest increase in funding for FY 2019 to meet the growing need for services.

Title X sets the standard for high-quality family planning and sexual health service provision by focusing on outcomes and increasing service efficiency. In April 2014, “Providing Quality Family Planning Services – Recommendations of CDC and the U.S. Office of Population Affairs” was released. The recommendations are a rigorous set of clinical guidelines developed for family planning providers, including Title X-funded providers.vii Such efforts reinforce the network’s providers as centers of excellence for high-quality health care and make Title X-supported health centers the provider of choice for people with and without insurance.

In spite of the increasing need for publicly funded family planning services and the demonstrated public health and fiscal benefits of the program, Title X investments have been substantially cut in recent fiscal years. In FY 2010 the program received $317 million, but in FY 2018 it received only $286.5 million. The reduced program investment is counter to research published in the American Journal of Public Health stating Title X would need at least $737 million to support all women in need of publicly funded family planning services.viii It also unfortunately aligns with dramatic decreases in the number of Title X-supported service sites – from 4,389 in 2010ix to 3,898 in 2016x – and in the number of patients served – from 5.22 million in 2010xi to 4 million in 2016.xii We are deeply concerned about this diminished access to high-quality family planning and sexual health services and urges increased funding of at least $317 million in FY 2019 to reverse this devastating trend.

Medicaid is the predominant funding source for publicly funded family planning care. It is proven to save taxpayer dollars by expanding access to contraception and increasing women’s use of more effective contraceptive methods – essential factors in reducing high rates of unintended pregnancy.xiii We support the provision of family planning and sexual health and supplies through Medicaid as an essential component of preventive care. We strongly oppose any changes to the structure or financing of Medicaid, including a conversion to a per-capita cap system or a block grant, which would shift costs to states and result in reductions in eligibility, benefits, protections for enrollees, and provider reimbursement. We further oppose any rollback of the Affordable Care Act’s (ACA) Medicaid expansion, which would risk health insurance coverage for the estimated 11 million adults made newly eligible for Medicaid in 2015.xiv

In addition to the many other important programs it supports, the Maternal and Child Health (MCH) Block Grant provides additional funds that states can use to help women plan their families. As a result, Title V funding is an important part of the publicly funded family planning network. Unfortunately, MCH Block Grant funding has been reduced in recent years, even as the number of women and children in need of these support services increases. Increasing Title V funds is vital in sustaining the coordinated care system between family planning and maternal and child health services. We support $667 million for Title V MCH block grant in FY 2019, equal to the increase that the administration proposed for FY 2018. We further oppose cuts to, or the elimination of, any other maternal-child health programs as a trade-off for this increase.

Federal block grants, such as the Temporary Assistance for Needy Families (TANF) block grant, the Social Services Block Grant, the Community Development Block Grant, and the Community Services Block Grant provide private and public organizations with funding to engage in a number of social support, economic development, and community health projects. Portions of the other aforementioned block grants are also used to foster the economic self-sufficiency of women and families by ensuring they have access to the health services that help them prevent unintended pregnancies.xv We oppose the cuts to these programs proposed in the FY 2018 budget and request the following funding levels for these essential federal block grants:

Funding from NCHHSTP is utilized for HIV, other STDs, viral hepatitis, and TB prevention efforts in local health departments, nonprofit health care organizations, and state and local education agencies. In some of these health settings, funding from NCHHSTP is combined with Title X and other federal funds to create robust sexual health programs by paying for the cost of family planning nurse practitioners, testing supplies, and medications. We oppose the cuts proposed in the FY 2018 budget and request that the administration recommend $1.12 billion in FY 2019 to support the work of this critical center.

The Special Supplemental Nutrition Program for Women, Infants, and Children (WIC) provides nutritional support to low-income pregnant women and parents with children under five years of age through food packages, health education, and referrals to health and social services. The program, administered through grants distributed by state WIC agencies, complements the Title X program and the efforts of the publicly funded safety net to ensure access to health services for low-income women and families. WIC has improved birth outcomes, reduced health care costs, improved nutrition-related health outcomes, increased access to medical care, and improved preconception nutritional status.xvi We oppose the cuts proposed in the FY 2018 budget and request that the administration recommend $6.37 billion for the WIC program in FY 2019.

Exclude the Hyde Amendment and Other Harmful Policy Riders

The president should remove the Hyde Amendment and related restrictions from his FY 2019 budget request. That harmful language prevents women who qualify for Medicaid, work as federal employees, or otherwise receive health care coverage or services through the federal government from accessing abortion through those programs. Abortion is a legal medical service that must be safe and accessible to all women who seek it; women’s access to abortion should not be dependent on how they access their health care or coverage.

The president’s budget should also be free of any policy riders that seek to eliminate certain family planning and sexual health providers from accessing public funds based on moral objections, including objections to a provider’s scope of service beyond family planning. Such riders are to the detriment of patients and public health. We stand in support of Planned Parenthood and other abortion providers targeted for providing a safe and crucial medical service.

The president’s FY 2019 budget request should strengthen the safety net to make certain that millions of current and future patients can obtain high-quality, affordable health care at a location of their choosing. Millions of Americans rely on publicly funded health care programs, including publicly funding family planning, to make the best decisions for themselves and their families and to lead their best possible lives.

Thank you for considering these requests.

Trump Justices Endanger America’s Health and Safety Due to COVID-19: Our Courts, Our Fight