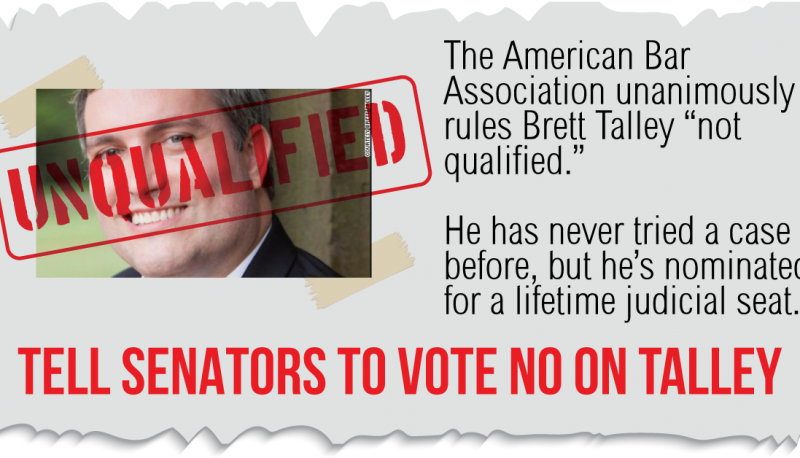 Tell Senators to Vote NO on Brett Talley

On September 7, President Trump nominated Brett Talley to a seat on the U.S. District Court for the Middle District of Alabama. The Senate Judiciary Committee held Talley’s hearing on October 17 and voted Talley out of committee on November 9. People For the American Way sent the following letter to committee members prior to the vote to express our opposition to the Talley nomination. You can download this letter, with endnotes, here.

On behalf of the hundreds of thousands of members of People For the American Way, I write in opposition to the nomination of Brett Talley to a seat on the U.S. District Court for the Middle District of Alabama. Talley’s scant record as a practicing lawyer coupled with serious questions about his objectivity and fairness with respect to core constitutional questions, argue against his confirmation for a lifetime seat on the federal bench.

The ABA generally considers 12 years of experience actually practicing law, with substantial trial experience, to be a minimal qualification for a judge. Talley has not even been out of law school that long. Since graduating in 2007, Talley has had only three years of experience as a practicing attorney:i as a junior associate at a Washington, D.C. law firm from 2007-2008, then as Alabama’s deputy solicitor general from 2015-2017. Talley has never himself tried a case but is nominated to be a trial court judge.ii As his responses to Ranking Member Feinstein and Senator Coons attest, he has precious little leadership experience in a variety of courtroom arenas.iii In particular, he has never argued any motion under the Federal Rules of Civil Procedure, presented argument in federal district court on an evidentiary issued governed by the Federal Rules of Evidence, has only taken one deposition in a federal court proceeding (and that was D.C. Superior Court), has never argued a discovery motion in federal district court, has never examined a fact witness in federal district court, and has never examined an expert witness in federal district court.

Against this thin background, it is particularly troubling that the ABA panel evaluating Talley’s nomination has unanimously agreed that he is not qualified to be a federal judge. It is hardly common for a judicial nominee to be deemed unqualified by a majority of the ABA panel. But unanimous agreement on such a devastating evaluation is exceedingly rare. In the 28 years of nominee evaluations on the ABA’s website, this is only the fourth time. (The third time was just a couple of weeks ago, with another Trump nominee.) This actually comes as no surprise, given that Talley has so little relevant experience. It is clear that he has been nominated not for his abilities but for his politics.

Talley’s record of hostility to reasonable gun violence prevention measures is also very troubling.iv Talley called 2012, a year marred by mass shootings in Aurora, Colorado and Newtown, Connecticut, “a bad year for those who value the time-honored right to bear arms.”v Talley pledged his support for the National Rifle Association and prayed for an NRA victory “in the coming battle for our rights.”vi Following the massacre in Newtown, Talley said “Today I pledge my support to the NRA; financially, politically, and intellectually. I ask you to do the same.”

With gun rights and gun violence prevention measures likely to be an ongoing subject for judicial review, Ranking Member Feinstein questioned Talley on his obligation to recuse himself in cases involving weapons. Talley refused to acknowledge that his writings facially challenge the “impartiality might reasonably be questioned” standard for recusal.vii

Also disturbing is Talley’s seeming acceptance of using the law as a pretext for punishing political opponents. In an online CNN post published two weeks before the presidential election, he wrote—falsely—that “Hillary Clinton has committed acts that would have resulted in the prosecution of ordinary citizens.” He also tweeted that Clinton should be in jail.

These were not throwaway lines or unintentional hyperboles, but were part of Donald Trump’s campaign strategy. As the GOP presidential nominee, Trump frequently threatened to imprison Clinton, even leading large, riled-up crowds in chants of “lock her up!” Threatening to wield the law as a weapon to imprison political opponents was—until last year—unprecedented in modern American history. Talley echoed Trump’s un-American, anti-democratic call.

For all of these reasons, we urge senators to oppose the nomination of Brett Talley to be a district judge in Alabama.