People For the American Way sent the following letter to Senate Judiciary Committee members to express our opposition to the confirmation of Eric Dreiband to be Assistant Attorney General for Civil Rights. You can download this letter here.

On behalf of the hundreds of thousands of members of People For the American Way, I write to express our strong opposition to the nomination of Eric Dreiband to be Assistant Attorney General for Civil Rights. If confirmed, he would do significant damage to the Justice Department’s Civil Rights Division and the vital rights and protections Congress intended it to defend.

Fifty years ago next month—September 9, 1957—President Eisenhower signed the Civil Rights Act of 1957 into law, creating the position that Dreiband has been nominated to fill. The Civil Rights Division’s home page provides a clear explanation of its mission:

[It] works to uphold the civil and constitutional rights of all Americans, particularly some of the most vulnerable members of our society. The Division enforces federal statutes prohibiting discrimination on the basis of race, color, sex, disability, religion, familial status and national origin.

The Civil Rights Division must be led by a person with a demonstrated commitment to enforcing our nation’s many laws prohibiting discrimination in employment, education, voting, credit, housing, and public accommodations.

Eric Dreiband is not that person. Both professionally and personally, he has worked to limit access to justice for victims of discrimination. He stands in opposition to the mission of the Division he now wants to run.

Dreiband has spent much of his career defending corporations accused of employment discrimination, as well as working on his own behalf against civil rights advances. 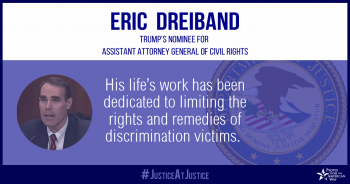 Four years later, in 2014, Dreiband again gave personal testimony before Congress to express his position on important employment discrimination legislation. This time, he voiced support for three bills that would have facilitated discrimination rather than reduce it. The EEOC Transparency and Accountability Act would have forced the Commission to divert significant resources away from enforcing Title VII and spend them instead on burdensome, unnecessary, and duplicative reporting requirements. The Litigation Oversight Act would have added bureaucratic complexity to the decision whether to sue an employer, and it would also have enhanced the ability of the EEOC to engage in partisan-based enforcement decisions. The Certainty of Enforcement Act would have allowed states and localities to adopt job requirements with a discriminatory impact that would otherwise violate Title VII.

Dreiband has also chosen a career defending large corporations from their employees’ charges of unlawful discrimination. In his role as an advocate, he presents legal theories that help his client but which would also make it far easier for employers to engage in discrimination.

Someone with a commitment to civil rights in their DNA seems unlikely to dedicate their professional life to defending corporate clients from discrimination suits. Obviously, everyone deserves a lawyer, and a lawyer’s advocacy on behalf of a client does not necessarily represent their own views. But Dreiband made his career choice on his own behalf, not someone else’s.

As a partner at Jones Day, Dreiband clearly has legal talent and experience. But it’s the wrong experience for the job he has been nominated to fill.

His nomination also raises significant concerns regarding voting rights, which come within the purview of the Civil Rights Division. Those rights are under attack from powerful forces.

Backed by the president’s lie that he won the popular vote and that millions of Hillary Clinton’s votes were cast fraudulently, President Trump has set up what is transparently a voter suppression commission. An appropriate nominee to lead the Civil Rights Division would be someone who has protested the commission’s creation, the pretense behind it, and the notorious voter suppression leaders who are running it: Kris Kobach and Hans von Spakovsky. The Division should be in the lead making sure that no American is unfairly disenfranchised. Retaining our democracy requires it. But Dreiband has shown no indication that he would be on the side of voting rights rather than voter suppression.

Especially in light of the recent violence and racial terrorism in Charlottesville, the American people are looking for vigorous action against discrimination and intolerance. The horrified nation looked to the president for words of strength and hope. Instead, President Trump made statements that thrilled the Nazis and other extremists in the alt-right, energizing them more than ever.

People in America are genuinely afraid.

Today’s newly invigorated fascists have a frightening view of America as a land of profound inequality enforced by violence. At a time of national crisis, our Civil Rights Division needs the leadership of someone whose life has been spent fighting against inequality in all its varied forms.

That is why we oppose the confirmation of Eric Dreiband.