Letter to the Moderators: The October Debate Should Address the Courts Issue 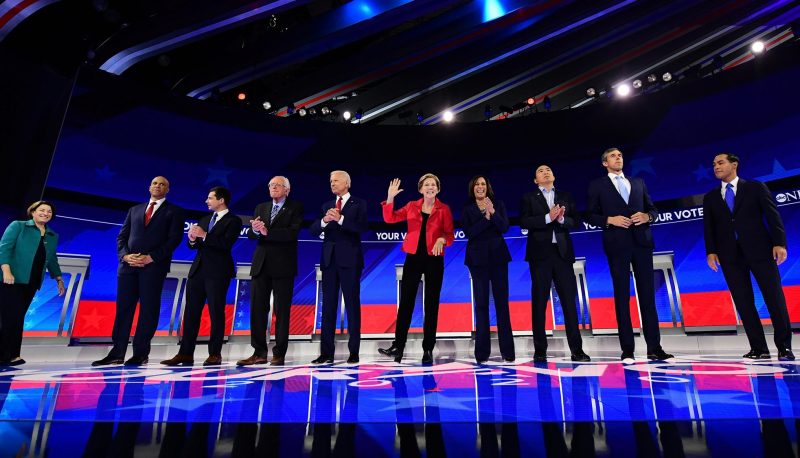 People For the American Way, an organization of 1.5 million members nationwide, today called upon the moderators and producers of the next Democratic presidential primary debate to raise the issue of federal courts at the event on October 15. PFAW President Michael Keegan made the request in a letter to moderators. The request comes as PFAW launches the #VoteTheCourts2020 campaign to call on all the candidates to lay out a compelling vision for putting fair-minded constitutionalists on the federal judiciary. Download the letter here.

On behalf of People For the American Way, a national organization of 1.5 million members dedicated to fighting right-wing extremism and building a democratic society that implements the ideals of freedom, equality, opportunity and justice for all, we urge you to address the issue of the importance of the federal courts at the upcoming Democratic debate on October 15 in Westerville, Ohio. This debate provides a critical opportunity to ask the candidates what they would do to repair the damage President Trump and his fellow Republicans have done to the courts—especially the Supreme Court.

In 2016, Mitch McConnell blockaded Merrick Garland’s nomination for more than half a year in order to prevent President Obama from having a third nominee to the Supreme Court. The result is that we got Justice Neil Gorsuch instead. And when Justice Kennedy retired, we saw Republicans engage in one of the most corrupt confirmation processes imaginable to get Brett Kavanaugh onto the Court. Both the president and Sen. McConnell’s reelection campaigns are selling T-shirts bragging that they are “Back-to-Back Supreme Court Champs.” Meanwhile on the lower courts, after spending eight years engaged in unprecedented obstruction to keep as many seats open as possible, Republicans have gone into overdrive to ram Trump’s unqualified nominees through the Senate confirmation process. They are confirming narrowminded elitists set on carrying out the conservative movement’s longtime goals, which include:

President Trump has placed a staggering total of 43 judges on our circuit courts thus far, nearly 25% of all active circuit judges. And as detailed in our Confirmed Judges, Confirmed Fears series, these judges are doing more and more harm to our rights and liberties.

Any agenda enacted by the next Democratic president is at grave risk of being destroyed by conservative extremists on the federal courts.

This has to end. Democratic voters want fair-minded constitutionalists on the bench who can be trusted not to put the interests of the powerful over the rest of us. Our nation needs judges and justices who understand the impact of the law on all people, not just people who are privileged. Our democracy depends on having judges who value equality and justice for all.

We need to know how the Democratic candidates plan to make that happen. What qualities will they look for in a potential Supreme Court justice or lower court judge? How will they restore balance to a judiciary that has been so damaged in the Trump years?

This is an issue that impacts every part of every candidate’s agenda, and it warrants significant attention during the campaign. We urge you to address this issue at next week’s debate, and thank you for your attention to this matter.