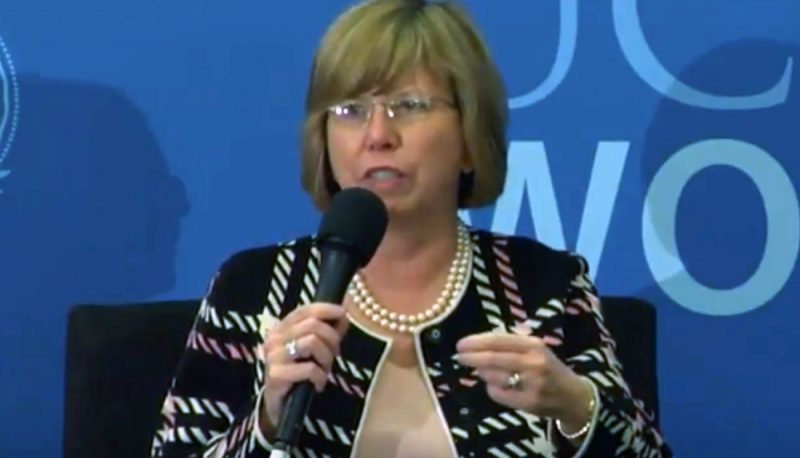 On June 29, 2017, President Trump nominated Janet Dhillon to lead the Equal Employment Opportunity Commission (EEOC). The Senate Health, Education, Labor & Pensions Committee has scheduled Dhillon’s hearing for September 19. People For the American Way and PFAW’s African American Ministers In Action joined the National Partnership for Women & Families, the National Women’s Law Center, and dozens of other workplace equality advocates on a letter sent to committee leaders expressing concern over Dhillon’s nomination. Her prior work experience raises strong doubts about her fitness to lead the EEOC in enforcing nondiscrimination laws and protecting the rights of workers. You can download this letter here.

As organizations committed to fairness and equality for women in the workplace, we urge you to rigorously question and closely review the record of Janet Dhillon, nominee for Chair of the Equal Employment Opportunity Commission (EEOC), as her background raises significant concerns regarding her commitment to protect individuals’ rights to be free from discrimination in the workplace. As you consider her nomination, it is imperative that the committee hold a full hearing – as it should for every nominee to the EEOC – at which you and your colleagues ask probing questions and listen carefully to Ms. Dhillon’s responses to determine if she is qualified to lead the EEOC in its vital mission protecting working people.

The EEOC serves a critically important role in ensuring equal opportunity for workers in the United States, enforcing laws prohibiting discrimination on the basis of sex (including pregnancy, gender identity and sexual orientation), race, national origin, age, disability and religion. The EEOC is particularly important for women, as it is often the first place women who have experienced workplace sex discrimination, including sexual harassment, pay discrimination and pregnancy discrimination, go to seek redress. Despite decades of progress, women continue to face discrimination in the workplace, making the role of the EEOC as vital as ever. Between 2010 and 2016, there were over 662,000 charges filed with the EEOC, of which 29 percent included sex discrimination claims. The gender wage gap remains a persistent issue, with women overall paid 80 cents for every dollar paid to men; women of color fare the worst. The EEOC plays a critical part in preventing, investigating, and remedying such discrimination, which requires strong and dedicated leadership.

Janet Dhillon’s career has been dedicated to representing private corporations.  Her years fighting on behalf of corporate interests, coupled with her lack of experience in civil rights or equal employment opportunity, raise concerns about her commitment and ability to lead the EEOC and put the rights and welfare of employees first. After working at the law firm of Skadden, Arps, Slate, Meagher & Flom LLP from 1991 to 2004, Ms. Dhillon worked for US Airways from 2004 to 2009, ending as a senior vice president, general counsel and chief compliance officer. From 2009 to 2015 she worked for JC Penney Company, Inc. as executive vice president and general counsel, overseeing all legal functions, including labor and employment. She currently serves as executive vice president, general counsel and corporate secretary at Burlington Stores, Inc. We are concerned that the nominee to lead the federal agency that promotes equal opportunity for employees has no experience doing so, and instead has spent her career advancing the interests of, and defending, large corporate employers in sectors where women face low pay and persistent discrimination.

During Ms. Dhillon’s confirmation hearing, we urge you to ask thorough questions about her relevant work experience and qualifications to chair the EEOC in a manner that ensures equal opportunity for all workers.

We also have serious concerns about Ms. Dhillon’s commitment to protecting the rights of working people because of her extensive involvement with the Retail Industry Leaders Association’s Retail Litigation Center (RLC). The RLC is led by the chief legal officers of large retail companies and describes itself as “dedicated to advocating the retail industry’s perspective in those judicial proceedings that are most important to the retail community.” The RLC has filed amicus briefs on its own and with other business associations in many state and federal cases; significantly, with regard to labor and employment issues, the RLC generally takes positions in favor of tightening class action standards, narrowing employer liability standards, supporting mandatory arbitration and class action waivers, and increasing judicial review of EEOC actions. The retail industry employs large numbers of women and faces persistent issues with pregnancy discrimination and sexual harassment.

Ms. Dhillon was involved in establishing the RLC, served as the first chair of the board of directors from 2010 to 2012, and remained on the board thereafter. During her tenure as chair and her subsequent board membership, the RLC authored or co-authored amicus briefs that successfully advanced positions adverse to workers in several Supreme Court cases. In Wal-Mart v. Dukes, the RLC urged the Court not to allow more than one million women who currently or formerly worked for Wal-Mart to challenge the company’s discriminatory practices as a class. The Court’s eventual 5-4 decision in favor of Wal-Mart opened the door for companies that foster a culture of bias and stereotypes to avoid class action discrimination suits by hiding behind a written nondiscrimination policy. In Vance v. Ball State University, the RLC brief argued against holding employers vicariously liable when a worker is harassed by a supervisor who controls their day-to-day activities but lacks the power to hire or fire. In a 5-4 decision, the Court ruled in favor of the employer, making it harder for workers who allege sexual harassment by their direct supervisors to have their day in court.

Also during Ms. Dhillon’s tenure on RLC’s board, the RLC submitted briefs siding with employers in the University of Texas Southwestern Medical Center vs. Nassar and in Mach Mining vs. EEOC. The Court’s 5-4 decision in Nassar made it more difficult for employees alleging retaliation for bringing a discrimination claim or participating in an investigation to be heard in court. Mach Mining opened the door for employers to drag out resolution of discrimination complaints by subjecting the EEOC’s conciliation process to review by the courts, and the RLC’s brief went as far as to accuse EEOC investigators of pursuing cases in order to “garner a favorable headline.” The decisions in all four of these cases impair workers’ ability to challenge and hold employers accountable for workplace discrimination, and Ms. Dhillon’s work in support of the outcomes in these cases is at odds with the mission of the agency she is nominated to lead. Accordingly, we urge you to question Ms. Dhillon vigorously about what her approach will be to investigating allegations of discrimination and harassment and defending the rights of workers in court.

Ms. Dhillon’s prior work experience and roles raise strong doubts about her fitness to lead the EEOC in enforcing nondiscrimination laws and protecting the rights of workers. More than 73 million women workers in this country depend on the EEOC to promote equal opportunity and enforce civil rights laws. We urge you to hold a full hearing and thoroughly investigate Ms. Dhillon’s views to determine whether she will uphold the vital work of the EEOC as its Chair.

If you have any questions, please contact Sarah Fleisch Fink at the National Partnership for Women & Families (sfleischfink@nationalpartnership.org) or Emily Martin at the National Women’s Law Center (emartin@nwlc.org). Thank you for your consideration.