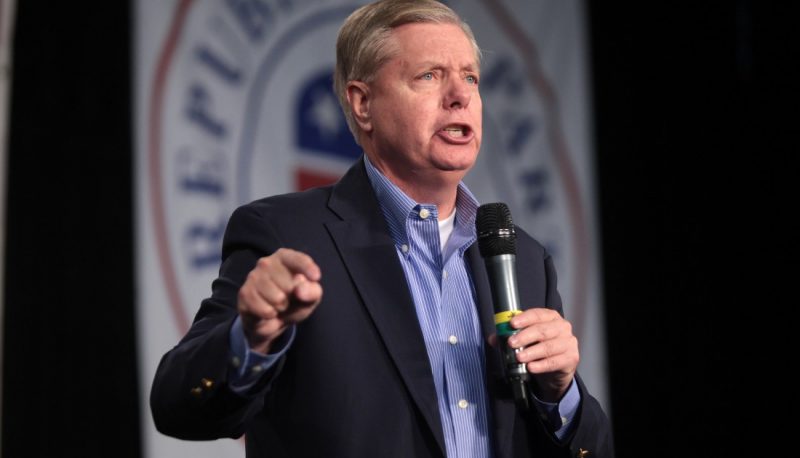 Senate Judiciary Committee chairman Lindsey Graham has proven himself an expert in the genre of alternate history, at least in the area of judicial nominations.

In the short time he has been chairman, he has held committee hearings and/or votes on eight circuit court nominees over the objections of one or both home state senators, with another scheduled for the end of March. These cover the Second Circuit (two nominees), the Third Circuit (one nominee), the Fourth Circuit (two nominees), and the Ninth Circuit (four nominees). In fact, like Chuck Grassley before him, Graham has so far not respected the objections of any Democratic home state senators for any Trump circuit court nominees whatsoever.

Graham’s Democratic colleagues have challenged him on this practice that was put into place after Trump became president. At the March 7 Judiciary Committee meeting, Graham felt compelled to justify his party’s abandonment of the long-standing “blue slip” practice that eliminated the power the minority party had to affect circuit court confirmations.

In Graham’s telling, it’s all the Democrats’ fault. The 2013 filibuster rules change caused the end of the blue slip policy in 2019, he says, because the 2013 change completely eliminated the minority party’s influence in the confirmation process:

I didn’t start this mess.  I remember the conversation like it was yesterday. I got a phone call from Sen. Schumer saying we’re going to change the rules tomorrow for circuit courts.

I said—why?  We weren’t obstructing.

Sen. Schumer, I like him a lot, I’ve worked with him as much as I can, but when it comes to judges, I think he’s been—not a helpful force.

I remember the Bush years, where all the Bush nominees were being filibustered en masse. Then we had the Gang of 14, that a filibuster should only be based on extraordinary circumstances.  It held for like seven years.

Then in 2013, you changed the circuit court rules so that the minority has no voice. You can do it with a simple majority vote.  I find it ironic now that here’s the request [from Sen. Schumer]: Well, I’m the guy that wiped out the minority’s input, but I’d like you to allow me—single-handedly—to be the person to stop everything from the Second Circuit.

To expect that outcome was pretty naïve.

Graham’s version of the breakdown of the judicial confirmation process is a great story to tell the public to justify his party’s current modus operandi, and perhaps he can sleep better at night if he remembers it that way, but it is truly a work of alternate history.

The opening chapter – Bush’s first term and the lead-up to the 2005 Gang of 14 agreement – is where the historical break begins:

I remember the Bush years, where all the Bush nominees were being filibustered en masse.

“All the Bush nominees?” Not quite.  During Bush’s first term, the Senate confirmed 203 lower court judges, most with overwhelming bipartisan support. Looking only at circuit courts, Bush made 52 nominations during his first term, and most were confirmed with little to no opposition from Democrats. However, ten of his circuit nominees generated such significant opposition that Republicans were unable to achieve cloture with the needed 60-vote threshold.

Perhaps trying to make a campaign issue out of it, Republicans held multiple cloture votes for the same nominees during the first term, including seven for Miguel Estrada and four for Priscilla Owen. So while Sen. Graham may remember constantly voting on cloture motions, it was his own party that made the votes so frequent.

The chairman’s history then skips directly to the Gang of 14 agreement with no mention of why it came about in the first place. November 2004 saw Bush get reelected and the Republican Senate majority grow from 51 to 55. During the first few months of the second term, emboldened Republicans were threatening with increasing vehemence to unilaterally change the chamber’s rules by majority vote and prohibit filibusters of judicial nominees. (Perhaps that’s where the Democrats got the idea for the 2013 rules change in the first place.)

Confident of support within his caucus, then-Majority Leader Bill Frist planned to invoke the nuclear option on May 24. But with just a few hours to spare, seven Democrats and seven Republicans (including Graham) made a deal among themselves that ended any possible majority for the GOP’s nuclear option. Their agreement not to support a rules change, to filibuster only under “extraordinary circumstances,” and to allow cloture on several extremely controversial circuit court nominees came about only because of increasingly bellicose threats from Graham’s side of the aisle that he left out of his historical review.

Also missing from his recitation is a key limitation of the Gang of 14 agreement: By its own terms, it applied only to that 2005-2006 Congress. Nevertheless, when Democrats filibustered Bush nominee Leslie Southwick in 2007, Sen. McCain (the most prominent member of the Gang) accused them of violating the agreement:

So a group of us, who were given the nickname of the “Gang of 14,” got together and agreed that we would not filibuster or require 60 votes unless there were “extraordinary circumstances.” … I think it is pretty obvious that agreement has broken down.

But when Obama became president and Republicans filibustered his nominees in the absence of extraordinary circumstances, they pointed out that the Gang of 14 deal was not meant to go beyond Bush’s presidency. For instance, Chuck Grassley stated with regard to the GOP’s filibuster of D.C. Circuit nominee Caitlin Halligan:

There has also been some discussion recently about the so-called “Gang of 14” agreement. Now, as an initial matter, that agreement by its own terms doesn’t exist anymore. So I don’t understand how it is possible that Tuesday’s vote could have ended the agreement.

In other words, a Democratic filibuster of a Bush nominee after the agreement expired was considered a break of the expired agreement, but a Republican filibuster of an Obama nominee was fine? Different rules for different parties?

Graham’s alternate history, in addition to his clearly false claim that the Gang of 14 agreement “held for like seven years,” also accuses Democrats of changing the rules in 2013 for no good reason, since “we weren’t obstructing.”

I’m not sure what Graham thinks the word “obstruction” means, but clearly what happened in 2013 was unprecedented obstruction by any person’s definition. Republicans announced that they would oppose anyone that Obama might eventually nominate to fill three vacancies on the 11-member D.C. Circuit, which at the time was divided evenly between Republican-appointed judges and Democratic-appointed ones. Chuck Grassley even introduced a bill to eliminate the three vacancies altogether. Rather than be bullied out of doing his job, Obama nominated three accomplished lawyers: Patricia Millett, Nina Pillard, and Robert Wilkins. Republicans blocked all three and made clear that their opposition was independent of anything specific about the nominees.

Because an important court was ideologically divided, Republicans did everything they could to prevent President Obama from filling any of the three vacancies (just as they would later do with the Supreme Court). The only “extraordinary circumstance” was the GOP’s effort to prevent the president from filling any vacancies on a court that Congress had determined by statute should have 11 active judges, not eight. That unprecedented obstruction is what drove Democrats to do in 2013 what Republicans had threatened and tried to do until stopped by the Gang of 14 in 2005.

Yet throughout 2014, 2015, and 2016, under chairmen of both parties, the blue slip policy remained completely unaffected by “what happened in the past” and continued to serve as an “absolute veto.” In fact, when Republicans won control of the chamber in the 2014 elections, Chairman Grassley made that clear in a column he wrote in the Des Moines Register:

For nearly a century, the chairman of the Senate Judiciary Committee has brought nominees up for committee consideration only after both home-state senators have signed and returned what’s known as a “blue slip.” This tradition is designed to encourage outstanding nominees and consensus between the White House and home-state senators. Over the years, Judiciary Committee chairs of both parties have upheld a blue-slip process, including Sen. Patrick Leahy of Vermont, my immediate predecessor in chairing the committee, who steadfastly honored the tradition even as some in his own party called for its demise. I appreciate the value of the blue-slip process and also intend to honor it.

And honor it he did—as long as Obama was president. Graham’s alternate history makes no mention of how Grassley refused to hold hearings for Obama circuit court nominees who did not have the support of both home state senators:

Knowledge of the “absolute veto” that Graham claims did not exist after 2013 also led to some vacancies never even having nominees. For instance, Fifth Circuit judges Emilio Garza and Carolyn Dineen King took senior status in 2012 and 2013, respectively.  The Obama White House negotiated in good faith with Texas Sens. Cornyn and Cruz throughout the rest of Obama’s presidency, but never reached an agreement on nominees who would not be blocked by Cornyn and Cruz. (Those seats are now occupied by Trump nominees James Ho and Don Willett.)

The blue slip policy didn’t change until four years after the 2013 rules change, when Trump became president. That is when Grassley “changed the circuit court rules so that the minority has no voice.” As a result, for the first time in history, our nation’s federal appellate courts are now being occupied by judges who were unable to earn the support of both home state senators:

So when the chairman laments how things got to this point, he should acknowledge the real story. Republicans bullied Democrats into accepting cloture on several of President Bush’s worst nominees. They abused their power as the minority party to prevent President Obama from filling three vacancies on the 11-member D.C. Court. They abused their power as the majority party in their unprecedented refusal to consider President Obama’s nominee for the Supreme Court. They tore up the blue slip policy only when Trump was elected because it got in the way of their project of taking over all of the nation’s circuit courts.

Republicans wield power ruthlessly and without principle. Their party is increasingly unmoored from the rule of law and the norms of democracy.