Tennessee State Senator Mark Green was nominated for army secretary, an important role for the ongoing implementation of open service for gays and lesbians and people who are transgender. Yet Green is an extreme anti-LGBTQ elected official who wants to license discrimination against LGBTQ Americans, including supporting an attempt to force transgender students to use the restroom that matches their assigned gender at birth. Green has also shown his far-right ideology through Islamophobic statements and alarming anti-Latinx racism.

Today, after an outcry from PFAW activists and others, Green announced that he is withdrawing his nomination.

This is a major victory for anyone who cares about equality. People For the American Way activists and PFAW itself had taken a strong stand against Green’s intended nomination. Our message: Someone with such extreme far-right views should not be allowed to serve in this important government post.

On Thursday, PFAW delivered your petition signatures—thirty two thousand and counting—to Senator Jack Reed’s office. Senator Reed serves as the top Democrat on the Senate Armed Services Committee, which has jurisdiction over any army secretary nomination. 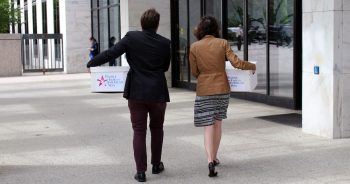 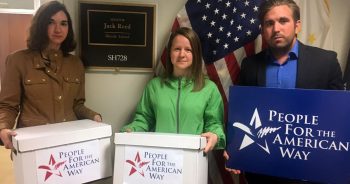 Mark Green has made a political career out of demeaning and marginalizing vulnerable communities and attacking their access to equality and opportunity. Our Army is made up of diverse communities of soldiers who proudly serve our nation and put their lives on the line for our freedoms. It would be unconscionable to put Mark Green in charge of that Army.

President Trump must put forward an army secretary for all servicemembers. Mark Green was not that nominee—far from it. His withdrawal is a sign of the strength and growing momentum of our movement.

Attorney General Nominee William Barr Will Undermine Civil Rights, Should Not Be Confirmed